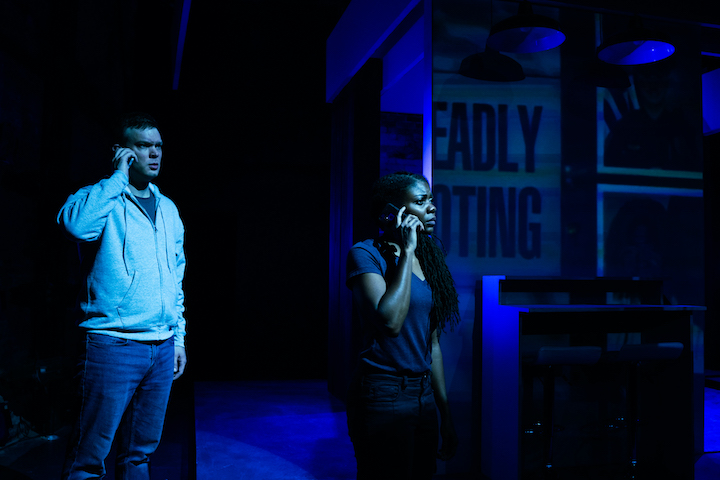 Amina (Leslie Ann Sheppard) and Ryan (Shattered Globe Theatre Ensemble Member, Drew Schad) are perfectly cast as two rookie patrol officers who meet, fall in love and grow together — emotionally and professionally — before they are irrevocably pulled apart by the roots of systemic racism. This story is told with a clear, decisive point of view that nonetheless does justice to the humanity of both parties. What draws the couple together is as logical and romantic as the progressive deceit and denial that drives them apart. The result is a fresh take on the real, repetitive tragedies of racial injustice that have shattered black families across the country.

Should we care about the story of the police shooter in the aftermath of his or her life-claiming error, however well-intentioned? I’m not sure I would have otherwise considered the question, but SHEEPDOG dares audience members to get invested in Drew, even if we can’t fully understand or forgive.

In a display of dramatic brass, Artigue, a white male writer, successfully creates Amina, an independent, intelligent, tough, self-made African-American woman. She is the vehicle for our collective investigation of the complicated socio-economic and racial dynamics that so frequently end in the death of young black men. But she is also a fully-realized human being — in love, ready to start a family with her trusted “person,” a fellow servant of justice and the public.

The choice for a white male author to put this much burden on a black, female character could be interpreted as an act of unearned creative privilege. And in the hands of a less deft production company, the deployment of a black woman to take us through an “All Lives Matter” story might irritate. But in this production, it absolutely works for a few important reasons, including the narrative voice which belongs completely to Amina, forcefully articulated by Sheppard’s performance.

Ryan may be the character who initiates and sustains the plot’s intrigue, but we are never allowed fully inside his head. He appears to the audience as his partner sees and hears him. Thus, when Amina rages aloud about the disconnect between the caring man who loves and accepts her, versus the perpetrator of naked, white male aggression she ultimately sees on film, we share her grief and despair. Is this the way the story must always end? Is it impossible to love enough to change the narrative? Or, blinded by our own prejudices, do we miss those important opportunities?

While the fine work of Drew Schad is not to be taken for granted (it can’t be easy humanizing a potentially racist murderer), this production belongs to Sheppard. At the conclusion of Sunday’s opening performance, the actress accepted her standing ovation with exhausted tears of gratitude. 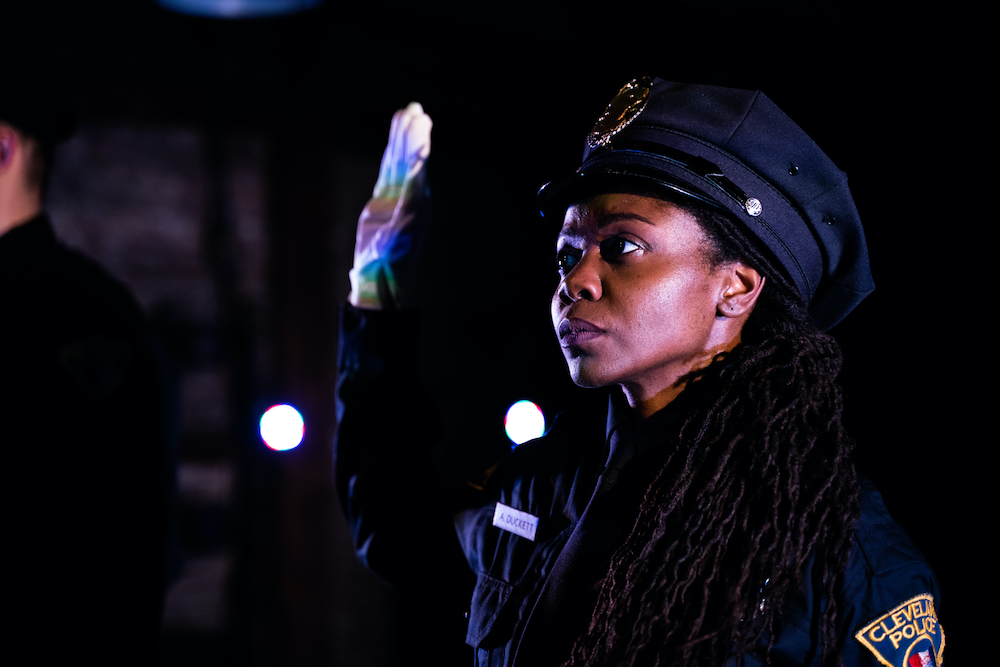 I have read and witnessed in a number of important theatrical works that engage the topic of racially-motivated, extrajudicial killings of black men in the United States. But I’ve never seen the topic engaged like this – the love of, empathy with, and ultimate rejection of the white, male police shooter – through the eyes of his black, female lover and colleague. SHEEPDOG is provocative, brave, and in the hands of Shattered Globe Theatre’s creative team and expert performers, should not be missed.