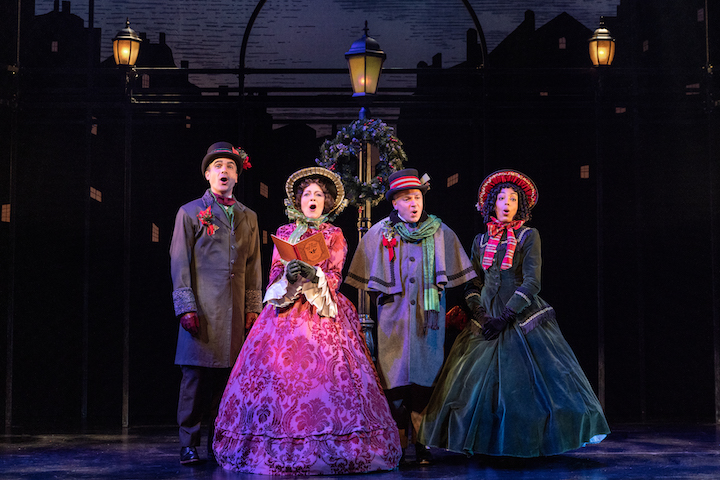 Solve the mystery of what show to take your family to see this winter with New World Stages’ production of A Sherlock Carol, written and directed by Mark Shanahan. In this spirited holiday production, two beloved classics come together, with some mystery and music thrown in for good measure.

In this mash-up of Sir Arthur Conan Doyle and Charles Dickens, a grown-up Tiny Tim (a jovial Dan Domingues) approaches a past-his-prime Sherlock Holmes and asks him to investigate the death of his benefactor, Ebenezer Scrooge. Scotland Yard’s Inspector Lestrade (Anissa Felix in a gender-blind casting) believes Scrooge died of old age, but a missing will and a priceless stolen gem cloud things a bit for both Cratchit and Holmes.

As the titular Sherlock Holmes, Drew McVety comports himself very well, as expected from the main character. But almost supplanting his performance at times is Mark Price as Holmes’s stalwart sidekick, Dr. John Watson. Not only is Price excellent in his primary role, but he also shines in his smaller ancillary roles, especially that of Scrooge’s housekeeper, from her frumpy frock and bonnet right down to her thick English accent. 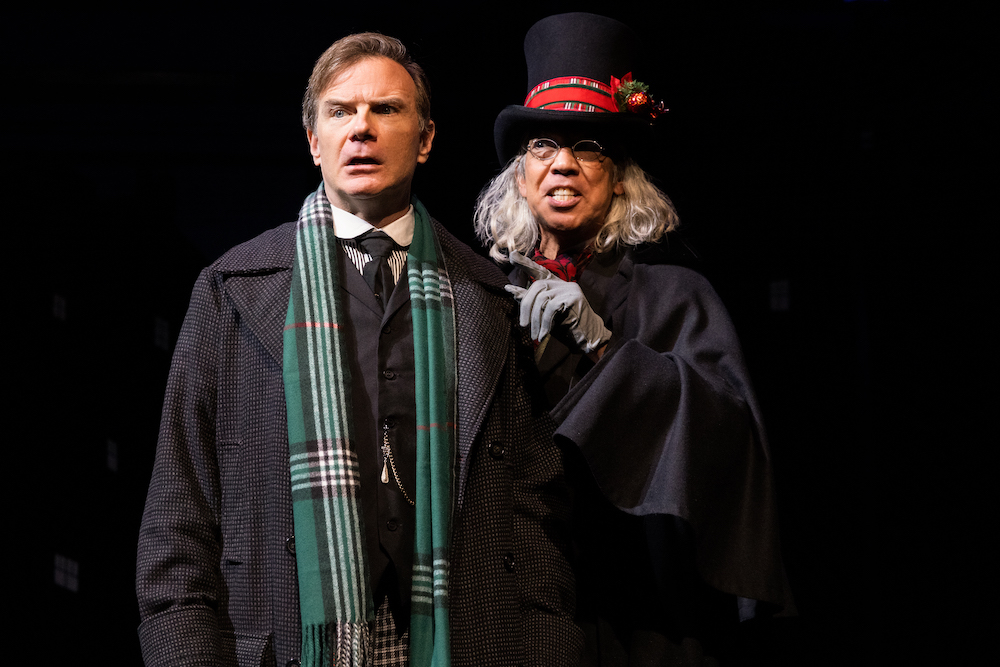 Additional plaudits go to Thom Sesma as Scrooge in Claire Burke’s color-blind casting, which creates a more diverse stage presence than seen in most holiday shows. For a character who is technically dead throughout most of the proceedings, Sesma is incredibly animated, especially when he pops through hidden doors in the set to re-enact scenes from the original Dickens classic. Although the main cast has only six players and three understudies, all the actors play multiple roles, and nothing is lacking.

The play’s dialogue primarily consists of easily recognizable lines from A Christmas Carol, except in this rendition, they are said by or to Holmes or used by other characters to further the action. They are rolled out pretty much in the order of Dickens’s holiday masterpiece, except for some glossing over toward the end of the tale when the spirits make their visits.

For in this play, it is Holmes who must seek redemption, with the ghost of Scrooge acting as all three spirits of Christmas past, present, and future to show him the error of his ways. Holmes takes a hard road toward redemption and learns to forgive others. But during the journey, he regains what was important in his life: his love of Irene Adler, his friendship with Dr. Watson, and his reputation as London’s premier consulting detective.

Although the play is not a musical, there are musical elements, mainly in the form of Christmas carols. This — along with the festive holiday decorations and apparel on display — elevates the level of Christmas cheer for a show that seems intended as a lighthearted holiday romp.

Kudos to costume designer Linda Cho for rolling out some genuinely delightful period costumes. From the bustled women’s party dresses to Holmes’ checkered trousers right down to the pointy-tipped butcher’s apron, the costume designs were spot-on and added another level of authenticity and fun to the proceedings.

With a run-time of slightly more than two hours including a 15-minute intermission, this is the perfect length show for a dowager aunt or restless nephew. The action moves quickly and keeps the audience engaged at every point, with an unexpected twist every now and again to keep them on their toes.

It’s also relentlessly cheery and Christmassy — just the thing to put folks in the mood for the approaching holidays. Between the clever mystery mash-up, the talented actors, and the fun costumes, A Sherlock Carol is a new holiday classic that is itself a priceless gem waiting to be discovered.