Top Posts
‘Company’ to Hit the Road on North American...
Meet the Full Cast of ‘Shucked,’ Coming to...
Full Cast for ‘Parade’ Announced
Stephen McKinley Henderson Gives the Performance of His...
The McKittrick Hotel Announces the Return of ‘The...
Broadway Stars Honored with Academy Award Nominations
Taylor Trensch, Danny Wolohan, and More Join the...
A Gay Road Trip Comes to The Brick...
Maude Apatow of ‘Euphoria’ is the Next Audrey...
Tony Award Winners to Star in ‘Hercules’ at...
Home Beyond Broadway Casting Call: Who’s Headed to Broadway and Beyond?
Beyond BroadwayShow Folk ‘The Red Shoes’ (Photo: Johan Persson via The Broadway Blog.)

It’s sweltering in New York City – step onto the city streets and you’ll melt quicker than Elsa’s castle in Frozen. That’s not stopping casting directors and producers from auditioning and casting some of the most anticipated shows of the season. Here’s a quick look of who’s appearing in what… and when! Steven Pasquale (Photo courtesy of LCT via The Broadway Blog.)

Junk is the story of Robert Merkin’s (Steven Pasquale) assault on American capitalism’s holy of holies, the “deal of the decade,” his attempt to takeover an iconic American manufacturing company and, in the process, to change all the rules. What Merkin sets in motion is nothing less than a financial civil war, pitting magnates against workers, lawyers against journalists, and ultimately, pitting everyone against themselves. Set more than thirty years ago, this is a play about how, while most of us weren’t watching, money became the only thing of real value. Hamilton on Broadway
Tony Award-nominee Euan Morton will join the Broadway cast of Hamilton as King George III on Friday, July 28. Morton joins the company direct from the national tour of Hedwig and the Angry Inch. He replaces Brian d’Arcy James who created the role of King George when Hamilton debuted at the Public Theater in 2015. James will play his final performance on July 16.

Euan Morton just finished rocking audiences across America as Hedwig in the national tour of Hedwig and the Angry Inch. He originated the role of Boy George in the musical Taboo in London and New York for which he was nominated for an Olivier and a Tony Award.

In addition, he received a Theatre World Award for Outstanding Broadway Debut. Additional Broadway credits include Cyrano de Bergerac and Sondheim on Sondheim. He has numerous Off-Broadway and regional credits, including a production of Measure for Pleasure at the Public Theatre that earned him an Obie Award, and Parade at the Ford’s Theatre, for which he won a Helen Hayes Award for his performance as Leo. Charm at MCC Theater
The complete cast and creative team for the first show of MCC’s upcoming 2017-18 season: the NYC premiere of the acclaimed transgender-themed play Charm—inspired by the real-life story of Miss Gloria Allen. The show opens September 18, 2017.

“Sometimes it feels like I’m reading my own story. Charm is everything I could have possibly wanted at this moment. As an actor, it’s a gift and it also gives me the opportunity to portray a person I call a real-life hero,” said Charm star Sandra Caldwell.  “I watch the world changing right in front of my eyes. But back in the day it was about don’t tell, don’t talk. I’m so glad my journey lasted long enough for me to see people realizing their freedoms and living authentically. The world may not be ready to accept 100%, but it is absolutely taking a turn for the best. Ironically, I was there when the historic Stonewall went down and I’m thrilled to be here when it is being celebrated once again.”

In a statement from MCC Theater Co-Artistic Director Will Cantler: “MCC is committed to telling stories that reflect the diversity of the American experience. With the extraordinary Charm, we took great care to cast actors whose own life experiences—and identities— can inform and enrich the characters they will portray.” ‘The Red Shoes’ (Photo: Johan Persson via The Broadway Blog.)

The Red Shoes at Ahmanson Theatre
The cast is set for the acclaimed Matthew Bourne / New Adventures production of “The Red Shoes.” Presented by Center Theatre Group and Glorya Kaufman Presents Dance at The Music Center, the American premiere of “The Red Shoes” runs September 15 through October 1, 2017, with the opening set for September 19.

The role of Victoria Page, the girl who dreams of being a great dancer, was created by New Adventures leading lady Ashley Shaw in a career defining performance. She will perform the role at the Ahmanson Theatre, as will New Adventures rising star Cordelia Braithwaite who has also received great praise for her interpretation.

Sam Archer, who created the title role in “Edward Scissorhands” in 2005 and performed the role at the Ahmanson, has starred in “Cinderella,” “The Car Man” and “Play Without Words.” Archer returned to New Adventures to create the iconic role of Svengali-like impresario Boris Lermontov, which he will perform at the Ahmanson.Jack Jones, who recently made his debut in the role, will also play Lermontov at some performances.

Dominic North, one of New Adventures’ most popular dancers, created the role of Julian Craster. Joining him in the role for the U.S. tour is American Ballet Theatre star Marcelo Gomes, who was last seen with New Adventures in “The Car Man” at Sadler’s Wells in 2015 and previously danced The Swan in “Matthew Bourne’s Swan Lake” in Tokyo in 2014. Inspired by one of the greatest novels in Western literature, Man of La Mancha brings the audience into the world of the “mad knight” Don Quixote as he pursues his quest for the impossible dream. The internationally acclaimed musical is a glorious affirmation of the unyielding resilience of the human spirit. Featuring the classic song “The Impossible Dream,” this timeless tale of love and adventure continues Orlando Shakes’ streak of bringing the best of Broadway to the intimate Margeson Theater.

“Right now, I feel it’s more important than ever that we give our community hope and something to believe in,” said Jim Helsinger, Artistic Director at Orlando Shakes. “Man of La Mancha is more than just a classic Tony Award-winning musical. It’s a reminder that the human spirit has an unyielding capacity for hope and love, and no matter how dark the world may seem, it is the light of our dreams that leads us on.”

Broadway veteran Davis Gaines will return to Orlando Shakes to star as Don Quixote. Best known for playing the title role in The Phantom of the Opera more than 2,000 times in New York, Los Angeles, and San Francisco, Gaines was last seen at Orlando Shakes in their 2015 production of Monty Python’s SPAMALOT. Gaines also starred in the Theater’s 2014 production of Les Misérables. Other Broadway and National Tour credits include Hello, Dolly! (with Carol Channing), Camelot (with Richard Burton) and The Best Little Whorehouse in Texas (with Alexis Smith).

Starring opposite Gaines as Aldonza is Laura Hodos. Hodos is a four-time Carbonell Award nominee and New Times Critic’s Choice for Best Supporting Actress in 2016. She has been seen in the new Frank Wildhorn musical, Bonnie and Clyde (Asolo Repertory Theatre), in the premiere production of Jolson at the Winter Garden (Maltz Jupiter Theatre), and in 1776 (Mad Cow Theatre). Hodos’ cabaret, The Bard Takes Broadway was produced by Orlando Shakes for UCF Celebrates the Arts 2017. 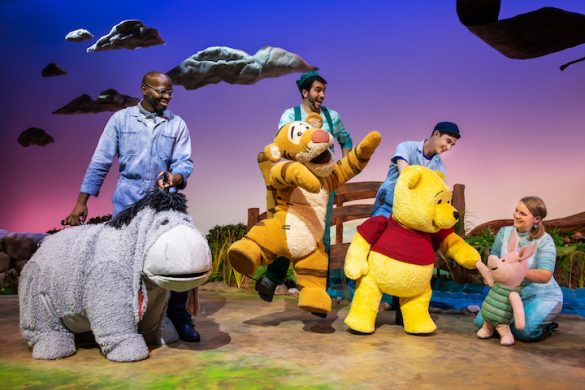