Top Posts
‘Company’ to Hit the Road on North American...
Meet the Full Cast of ‘Shucked,’ Coming to...
Full Cast for ‘Parade’ Announced
Stephen McKinley Henderson Gives the Performance of His...
The McKittrick Hotel Announces the Return of ‘The...
Broadway Stars Honored with Academy Award Nominations
Taylor Trensch, Danny Wolohan, and More Join the...
A Gay Road Trip Comes to The Brick...
Maude Apatow of ‘Euphoria’ is the Next Audrey...
Tony Award Winners to Star in ‘Hercules’ at...
Home Beyond Broadway Lost in Space: Sideshow Theatre Company’s ‘X’
Beyond BroadwayReviews 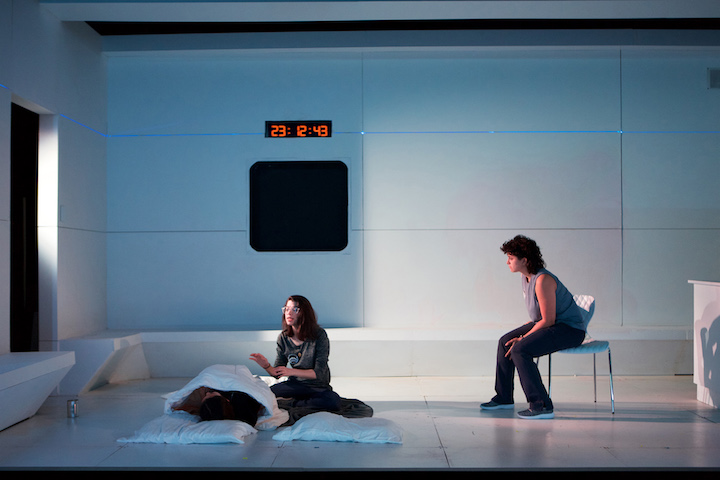 Sideshow Theatre Company opens its 2019-20 season with X, a dystopian offering boasting a first act that feels alarmingly imminent for a work set in the future. Yet in the second half, right as the script flirts with existential connection, the production collapses in on itself like so much dark matter. The curtain rises on relatable human confusion and despair and lowers with unsatisfying, literal nonsense.

This Chicago production serves as the U.S premiere of English playwright Alistair McDowall’s 2016 science-fiction script, written when Mr. McDowall was just 29 years old. Unfortunately, the inexperience demonstrates itself profoundly in structural incongruity and impulsive narrative decisions that undermine the entire first hour the audience spends investing in the characters.

Now billions of miles from an almost uninhabitable Earth, an international space crew is stationed on “X,” on a mission of undefined discovery. It’s been weeks since the grounded team received communication from its home planet. As time passes and normal anxiety progresses to self-annihilating panic, forms, shapes, visions and noises may no longer be what they seem.

A collective descent into madness – or perhaps just a pedantic reaction to the paranormal – is exhibited by the play’s five adult characters, and one preternatural changeling (Natalie Ortega). Lonely, nerdy Gilda (Sarah Price) serves as the crew’s leader, as well as its emotional and moral center. Though her training as an engineer little prepares her for the completely illogical and inexplicable events that follow, Ms. Price fortifies Gilda with enough internal strength to make the audience feel something about her last-woman-standing status. 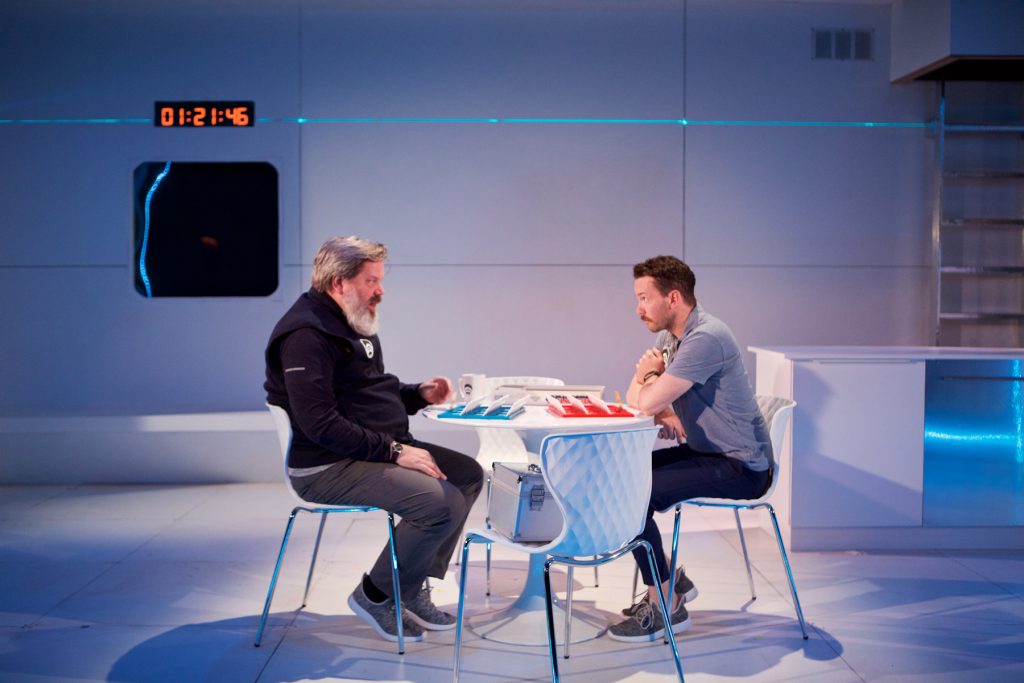 The most effective science fiction is that which places authentic people in fantastic situations, lending a constant and credible edge to intriguing unreality. Somewhere along his writing journey, Mr. McDowell stumbled over that paradigm and was unable to course correct (space pun acknowledged, if not intended). By the conclusion of X, the audience, like the characters onstage, must necessarily lose the narrative thread.

While Mr. McDowell alone is responsible for the rhetorical downshift into linguistic babble, there is enough empty space left for director Jonathan L. Green to clarify the narrative, but he doesn’t seem to know what direction it’s headed, either. In spite of the dramaturgical and production challenges, Gage Wallace delivers a worthy performance as British space bro Clark, a revelation of obnoxiousness, comedic timing and genuine pathos. Mr. Wallace, Ms. Price and H.B. Ward, who plays universe-weary elder crewman Ray all deserve better material.

If X ended after the first act, theatergoers would be treated to a meditation on the present stewardship of our planet as leading to inevitable tragedy. However, the fresh ideas, innovative structure and fearless reckoning with the mistakes of the cultural present that offer such early promise, yield to a confusing, senseless and forgettable conclusion.

Given the Chicago theater market’s worthy and plentiful slate of fall 2019 theatrical offerings, X is one to miss by a few thousand parsecs.