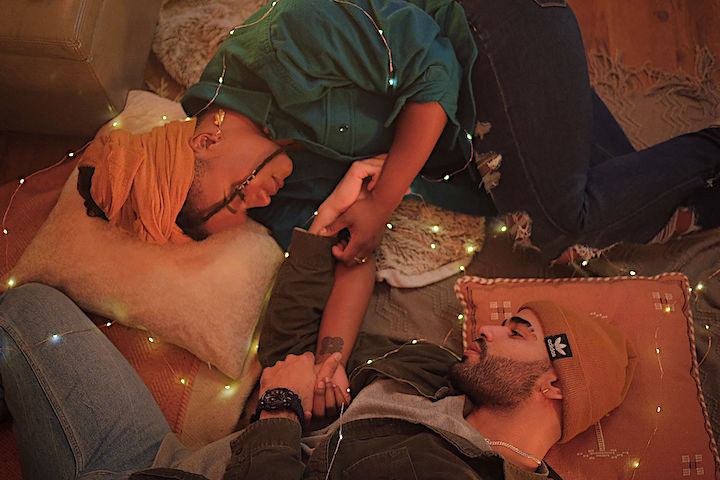 I know of a few relationships that have gone south over the past year. One of them was close to home, literally: my neighbors started getting into screaming matches, rather audible through our apartment’s paper-thin walls, and a few weeks later they were each moving out, separately. The pandemic’s been a challenging time for any relationship, and while Jason Robert Brown’s The Last Five Years was written long before COVID upended our lives, boy does it feel like a ripe time to present that musical about a romance in free fall.

Or is it about all the promise a partnership has in store? In this two-hander, it depends on your perspective as Jamie (Nicholas Edwards) and Cathy (Nasia Thomas) take turns trading solos, with the former moving from first-date to dissolved marriage and the latter storytelling in reverse. No matter who’s side you’re on, this production of The Last Five Years, now streaming through March 28, is highly inventive, deftly executed, and as intimate as the one-bedroom apartment it’s set in.

Jason Michael Webb’s production is a master class in not only how to pivot as a theatermaker during this time but also how to, timelessly and fluidly, breathe new life into a work. Webb may leave fellow directors wondering what potential their apartments hold: in this production — while Jamie and Cathy flit between the bedroom and living room, kitchen and bathroom — exuberant musicians move in and out of scenes, close-ups narrate as much as the lyrics, and washes of purple lighting throw the actors into the ecstasy and confusion of a fast-moving relationship. The domestic setting for the piece heightens its rawness, with songs acting as both diary entries and lovers’ quarrels.

Quarrel or ballad, in Edwards and Thomas’ hands, each solo is a knockout. Thomas’ “Still Hurting” aches with big “How did I get here?” energy as the hand-held camera tracks her rocky voyage from dark living room to the harsh light of an open fridge to fetch some curative wine; Edwards’ “Shiksa Goddess” hums with the electricity of a relationship about to bloom while, projected on the wall, we see the lesser-than mates he’s swiping through on Jdate. And when the two come together for “The Next Ten Minutes,” it takes little imagination to feel whisked out of their claustrophobic home and into the open air of Central Park.

Produced by Out of the Box Theatrics, Holmdel Theatre Company, and Blair Russell, this virtual and site-specific piece is so powerful it might cast any memories of the sub-par Jeremy Jordan and Anna Kendrick film out of your head. What’s more, it makes as good a case as any for a new way to imagine filmed musicals — during COVID, and hopefully long after.