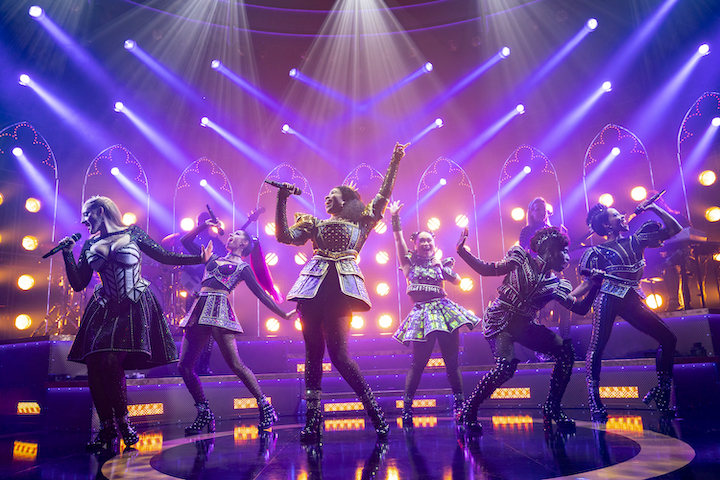 By April Stamm and Matthew Wexler

We first saw Six, the jewel box musical about the wives of Henry VIII, just before the pandemic shut down Broadway. The 85-minute bio-concert first saw the light of day in 2018 at the Edinburgh Fringe Festival and had already played Chicago, Minneapolis along with an open-ended London production, and was pummeling ahead at the velocity of a high-speed train. And so was the audience — a cacophony of teen girls and their moms along with superfans dressed like royalty. As much as we enjoyed the show’s spirit, at the time, it all felt a bit assaulting.

Now, 19 months later and more than 710,000 Americans dead due to coronavirus, Six resonates differently. Its six women deliver electrifying vocals that resonate as an anthem that rises above the muck we’ve all been living in. Make no mistake, though, Six is incredibly self-aware.

A concert-style set (designed by Emma Bailey) and a single set of bedazzled costumes (by Gabriella Slade), along with its four-piece “Ladies in Waiting” onstage band, make Six a perfect package to set out on the road to entertain the masses. Olivier-nominated choreographer Carrie-Anne Ingrouille makes the whole affair look bigger than it is, reconfiguring the cast in countless formations and drawing inspiration from some of our favorite pop performers like Beyoncé, Shakira, Nicki Minaj, Britney Spears and others.

What happens for the next hour or so is exhilarating. Adrianna Hicks starts us off as Catherine of Aragon, followed by Andrea Macasaet’s Anne Boleyn. Both numbers are big and bold, full of strength and thought, all with a little wink. They play with the modern both in sound and style while also delivering historical context.

As we hear Abby Mueller’s siren song as Jane Seymour, inspired by the drama and musicality of powerful singer-songwriter types like Adele, we start to wonder. Is this ok that we are going along with this all, categorizing these women, this history? Then who can feel trepidation when Brittney Mack’s Anna of Cleves breaks it down for us with a healthy dose of German techno and pure diva belting, reminding us that even though Henry VIII divorced her primarily because her looks didn’t stand up to the portrait he had seen, she landed on top. After the divorce, she had an estate that she ruled over, unfettered. Sounds great, empowering, right? It is the best-case scenario…well, given in the scenarios available to women treated as possessions.

At one point, Boleyn says, “Omg I get it – since the only thing we have in common is our husband, grouping us is an inherently comparative act, and as such it necessarily elevates a historical approach ingrained in patriarchal structures – yeah, I read.” 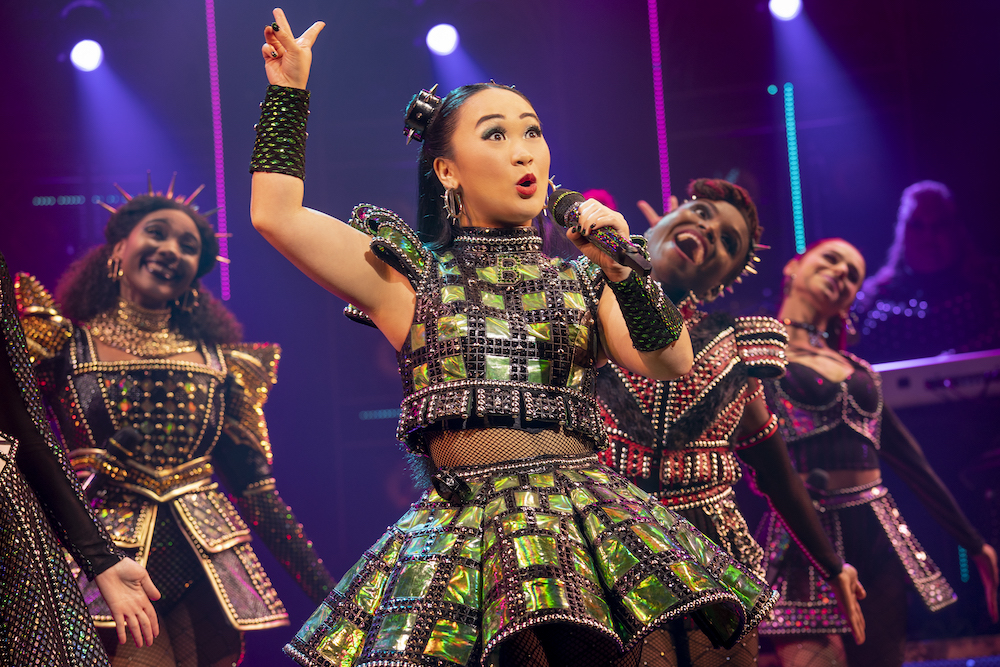 Then Six takes a further turn, and the intentional cracks begin to show through Samantha Pauly’s Katherine Howard’s spinningly fun and heart-crushing number. Finally, Anna Uzele’s Catherine Parr shines a light on what we’ve known all along. We see what the show is truly about.

Therein lies the mastery of Six, from the small and silly to the entire thesis of the show, Six is complexly and powerfully self-aware. It is aware of the pop divas it mirrors. They are picked not only because their music and voices call to us but because of how they’ve been put on a stage so very often by the patriarchy and had to claw their way into their own stories. This show is even aware of the social media buzz it spun into a frenzy, good for business, yes, but there’s something else there, a call to arms, a call to attention, a call to rewrite history through a wider lens.