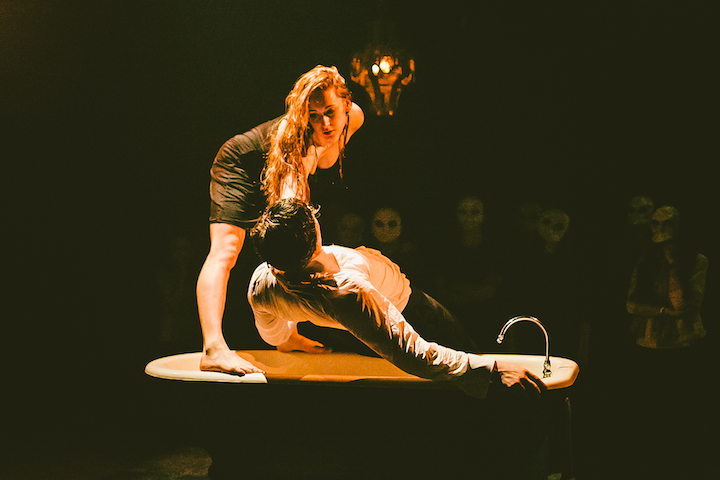 Once one of the hottest tickets in town, Sleep No More rises again at The McKittrick Hotel, reopening October 4 with performances on Sundays, Mondays, Wednesdays, and Thursdays at 7PM; Fridays at 7:30PM; and Saturdays at 3PM and 8PM.

The immersive retelling of Shakespeare’s Macbeth is part of the hotel’s return to live events, including music performances inside its revelrous Manderley Bar. The hotel’s rooftop garden bar & restaurant, Gallow Green, is already open for dinner and drinks, and dazzling feats of wonder return with Speakeasy Magick in The Club Car later this summer.

Presented by Emursive, Punchdrunk’s Sleep No More is an award-winning theatrical experience that tells Shakespeare’s classic tragedy, Macbeth, through a darkly cinematic lens. Audiences move freely through the epic world of the story at their own pace, choosing where to go and what to see, ensuring that everyone’s journey is different and unique.

The story unfolds through an awe-inspiring blend of acrobatic choreography, film noir soundtrack, and 100 rooms of densely detailed atmosphere sprawling over 100,000 square feet of space. The elements intertwine for a subversive and intoxicating 360-degree sensory immersion. During their stay, guests may also enjoy live music, cocktails, and an expansive wine and spirit list in the Manderley Bar.

Originally built in 1939, The McKittrick Hotel was intended to be the finest and most decadent luxury hotel of its time. However, six weeks before opening and two days after the outbreak of World War II, the legendary hotel was condemned and left locked, permanently sealed from the public until Emursive brought the Grande Dame back to life, reinventing the legendary space in collaboration with London’s award-winning Punchdrunk theater company.