Top Posts
Stephen McKinley Henderson Gives the Performance of His...
The McKittrick Hotel Announces the Return of ‘The...
Broadway Stars Honored with Academy Award Nominations
Taylor Trensch, Danny Wolohan, and More Join the...
A Gay Road Trip Comes to The Brick...
Maude Apatow of ‘Euphoria’ is the Next Audrey...
Tony Award Winners to Star in ‘Hercules’ at...
‘New York, New York’ Finds its Two Leads
Full Casting Announced for Oscar Isaac-Led ‘The Sign...
Disco Pop Musical ‘Here Lives Love’ to Bow...
Home Beyond Broadway Review: Somewhere With You
Beyond BroadwayBuzzReviews “Somewhere With You” (photo: Jeanette Aultz via The Broadway Blog.)

Now in it’s 11th year, the New York Musical Theatre Festival returns for three weeks of ingenious works in progress, all vying for the tiara of best musical, in hopes they will get picked up by a bevy of the city’s finest producers. Of the nearly 500 shows curated at NYMF, only three—Next To Normal, [title of show] and Chaplin—have made it to Broadway, and several musicals like Altar Boyz, Yank! and last year’s Volleygirls, which is being developed at New World Stages, have become cult hits.

With some tinkering, the JT Harding and Peter Zinn penned honky-tonk country rock musical Somewhere With You may join the latter. Offering a vicious yarn of addiction and meta-commentary of Bush’s war on terrorism, this Nashville radio-inspired musical gives a 21-gun salute to red-blooded Americans.

Somewhere With You follows TJ (Graham Scott Fleming), an aspiring 19-year-old country music star in backwoods Shreveport, Louisiana, down on his luck after losing his job for “sucking helium from a Slurpee machine” at the local Burger King. When his father evicts him from his trailer park home, TJ, now homeless and destitute, his cumbersome best friend Drew (Jonathan Judge-Russo) takes him in, much to the chagrin of Drew’s demanding girlfriend Nancy (Lauren Hoffmeier).

It doesn’t take long before TJ is kicked out and left to slum it with Benjaman Bakerman (Andrew Rothenberg), a sleazoid petty pusherman that may rival James Franco’s white bread ‘ratchet’ Spring Breakers alter ego. In lieu of a place to crash, Bakerman, a distributor of Methamphetamine, forces TJ to move his product. But the bright-eyed, fresh-faced Nashville crazed singer-songwriter has to know what he’s selling first.

Thus, TJ is sent to a room to try it out. There he has an unexpected meeting of the minds with crystal meth buff “23,” a spaced out young woman nicknamed after a spy on her mother’s favorite espionage TV show. This chance encounter spearheads the star-crossed couple into dangerous territory when they fall in love with one another. Katy Frame (23) in “Somewhere With You.” (Photo: Craig Bagno via The Broadway Blog.)

A prisoner to a drug lord and narcotrafficker, TJ is convinced by “23” to take Drew’s car and leave town, and so the two love birds elope and get clean. A happy ending seems just around the corner, until TJ enlists with the U.S. National Guard on the eve of September 11, 2001. His tenure with the military takes him around the globe while his vulnerable ex-junkie wife is left to her own devices. Things get ugly for the cast and spectators, as Act Two pivots the audience into the Third World of Husaybah, Iraq, and violence balloons. This is not for the faint of heart.

Zinn’s book feels contrived and convoluted at points, if not staggeringly offensive. For instance, shortly after the two love interests meet for the first time in the dark room sharing stories over a bonfire of crystal meth, they are interrupted by Bakerman who proceeds to carry a terrified “23” away before forcing himself on her. Not even a moment later, TJ sings a ballad about how smitten he is about the shell of woman being sexually assaulted in the next room. It is such a moment that one could argue reinforces the insouciant red flags of rape culture. Especially in the first act, the book does similar things in terms of juxtaposition, taking diegetic songs—most of which were previously written and recorded by celebrated artists like Kenny Chesney, Uncle Kracker and Jake Owen—and dropping them in chancy moments that rarely progress the story. But the talented cast anchors many of the glitches.

The cast of young actors, featuring neat cameo appearances by Jay Thomas (Emmy Award winner for Cheers), crafts a believable tale. Graham Scott Fleming’s voice, a silver toned baritenor with raspy tinge, searches the room with soulful, yearning eyes that sees wonder in everything. Katy Frame as “23” is spellbinding, hooking the audience with her warped ingénue character who has been weathered by life, showing a range and hardened exterior rarely seen in performers her age. Her Vaseline smile seems numbed by Novocain and peppered with pain. Jonathan Judge-Russo as Drew echoes America’s answer to James Corden, his offbeat humor tinged with a lick of self-deprecation. Lauren Hoffmeier’s aggressive alto, however, feels unfocused with signs of struggling vocal technique as she attempts to reach the soaring rafter-shaking notes that have become a standard in the musical theater canon.

Nevertheless, this occasionally controversial new musical inspires chill-inducing concerns, questioning the unnerving problems centralized around war and drugs. From the dissection of AA culture to faulty psych evaluations in admitting prospective legionnaires, the production raises profound inquiries for the both the mind as well as the heart. 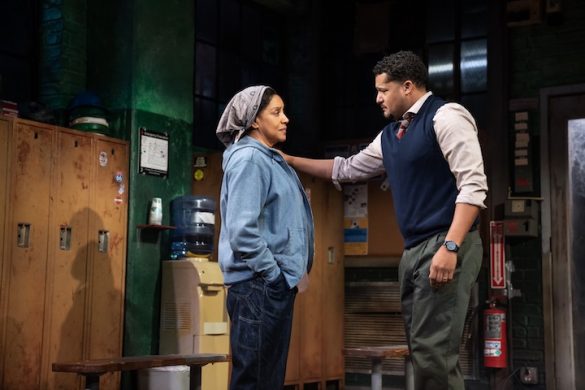