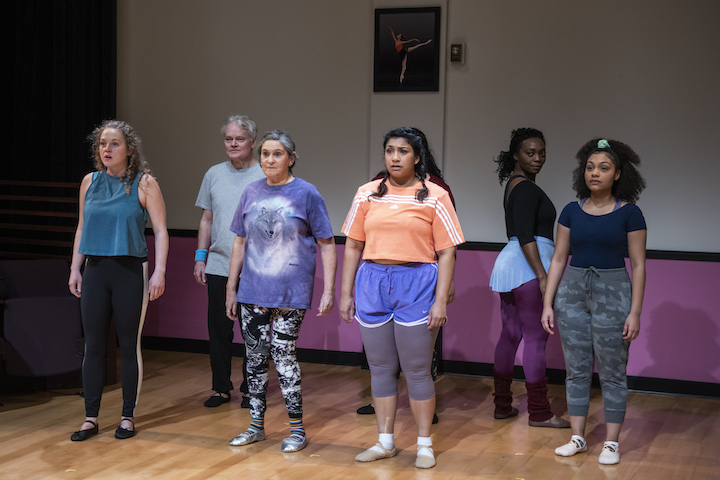 There’s a standout exchange in Sofia Coppola’s 1999 film The Virgin Suicides where a well-meaning physician says to his patient, young Cecilia Lisbon, “What are you doing here, honey? You’re not even old enough to know how bad life gets.” Cecilia dryly responds, “Obviously, Doctor, you’ve never been a 13-year-old girl.”

I’ve quoted that film over the years, often disappointed and sometimes downright angry at pop culture’s portrayal of teen girls as either the butt of jokes (they like texting! They roll their eyes a lot!) or cautionary tales (don’t go online or you’ll get sexually assaulted!). Judging from most media, you’d think it was impossible to see teen girls as complex human beings – disappointing to those of us who remember that time as the wild ride it is.

After seeing The Wolves, Sarah DeLappe’s stunning and nuanced portrayal of a high school soccer team, my sister and I looked at each other in awe because theater finally got it, got us, right. Clare Barron’s Dance Nation follows suit, replacing The Wolves’ soccer cleats with ballet slippers and its frenzied warm-up drills with group tap numbers.

Barron’s dialogue is equal parts dreamy and brutal, her character’s actions alternating between inexplicable and highly relatable. Diverse and noticeably older actors portray Dance Nation’s young teen characters. They aren’t trained hoofers but move with aplomb, and thanks to Lee Sunday Evans’ thoughtful direction, what could be gimmicky is instead extraordinary. Steppenwolf Theatre Company’s Chicago premiere of Barron’s Pulitzer Prize-finalist drama is as beautifully conceived and executed as the choreography its protagonists strive to master. 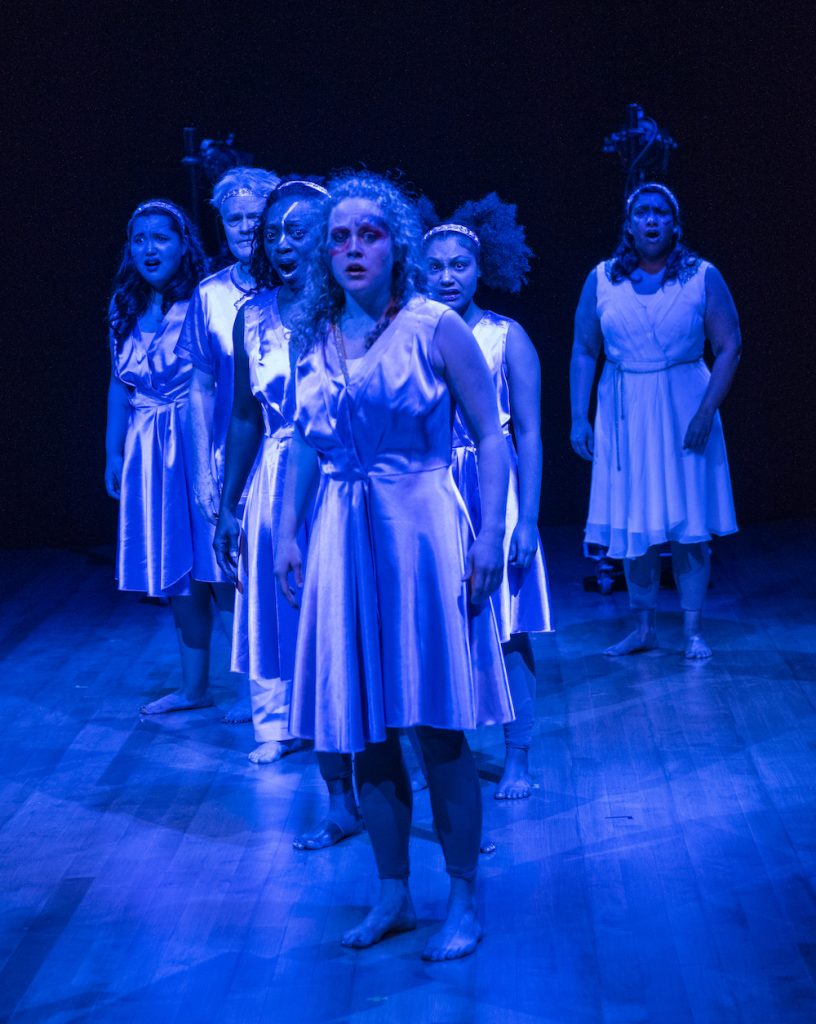 For a group of 13-year-olds from Indiana, competitive dance is the name of the game. The troupe must win three competitions to get to nationals in Florida, and Dance Teacher Pat (Tim Hopper) has the golden ticket: an “acro-lyrical” number about Gandhi. But who will land the lead role? Zuzu (Caroline Neff) knows that achievement would please her mother (Audrey Francis), but Amina (Karen Rodriguez) is the teacher’s pet and has the best technical skills. But then there’s Connie (Adithi Chandrashekar) who’s actually Indian. As the girls and their one male teammate Luke (Torrey Hanson) rehearse in the studio, gossip in the locker room and endure firsts behind closed bathroom doors, they learn about loyalty, friendship and the price of being on top.

Here’s the thing about being a teenage girl: it’s a dark, odd dichotomy of feeling so young you’re convinced you can fly, and so world-weary at the pressures of womanhood you’re already facing. When an older man looks your way, you’re both intrigued enough to show him your tight leotard and so afraid you brandish a plastic toy and run away shrieking. You’re not sure how to swear effectively and you question your masturbation skills. Barron’s script, combined with Evans’ direction and choreography, illustrates all of the above in a way that elicits nervous gasps, uncomfortable silences and uproarious laughter from audience members of every age and gender.

Whether it’s a sweetly naïve conversation about virginity-loss scenarios or a resounding chorus about pussy worship, Dance Nation captures the uncertainty of youth in a way that’s both powerful and disturbing. In an intense and intermission-less 115 minutes, Barron creates a specific yet universal environment that evokes the fleeting but unforgettable feeling of growing up.

As a former 13-year-old dancer whose instructors were the most important adults in my life after my parents, Dance Nation felt like immersive theater. When the lights came up, I was grateful that adolescence is a one-time deal. And during the show, when Dance Teacher Pat ordered his young team to breathe, I found myself obeying. Without question. Some old habits are hard to break.