Top Posts
‘Company’ to Hit the Road on North American...
Meet the Full Cast of ‘Shucked,’ Coming to...
Full Cast for ‘Parade’ Announced
Stephen McKinley Henderson Gives the Performance of His...
The McKittrick Hotel Announces the Return of ‘The...
Broadway Stars Honored with Academy Award Nominations
Taylor Trensch, Danny Wolohan, and More Join the...
A Gay Road Trip Comes to The Brick...
Maude Apatow of ‘Euphoria’ is the Next Audrey...
Tony Award Winners to Star in ‘Hercules’ at...
Home Beyond Broadway ‘Stop Kiss’ Still Resonates More Than 20 Years After its Premiere
Beyond BroadwayReviews 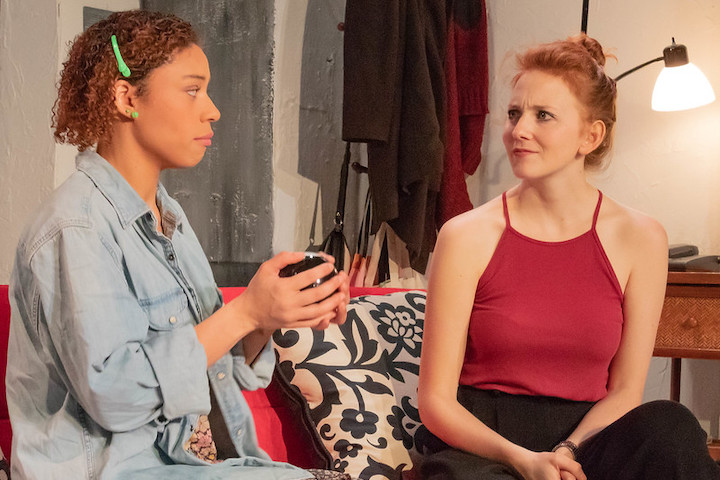 First produced Off-Broadway in 1998 at New York City’s Public Theater, Stop Kiss delivers a 90-minute emotional wringer, set to a nostalgic, late 20th-century pop music soundtrack. The result is an unrelenting portrait of American love and violence that feels as relevant today as it did over 20 years ago.

Featuring intelligent, complex source material from playwright Diana Son, solid direction from Kanome Jones, and a tightly connected five-person cast, Pride Films and Plays and The Arc Theatre collaborate to bring Stop Kiss to the stage, not so subtly reminding Chicago audiences that vigilance against hate crimes is as necessary as ever.

As the play opens, the audience meets two very different New York City women. Callie (Flavia Pallozzi) is a sophisticated on-air traffic reporter who stayed in the Big Apple after graduating college. Callie knows all the good restaurants and maintains a somewhat messy friends-with-benefits arrangement with her longtime friend George (Shane Novoa Rhoades). She lacks real passion for any of it, assuming that existential boredom is a tradeoff for the sensory stimulation of urban life.

Bright, excited and freshly relocated from St. Louis, Sara (Kylie Anderson) is a sheltered free spirit ready to leave her mark on New York. A committed public school teacher who has already tried and rejected heteronormative suburban life with her ex-fiancé Peter (Joe Faifer, in a dual role), Sara is looking for something more. After a rather pedantic establishment of their friendship rooted in cat-sitting, it’s clear that Sara and Callie have simmering chemistry.

The structure of the play’s narrative fully supports the organic, but complicated development of the women’s relationship. Their mutual attraction becomes apparent, then the action and timeline flip to a violent incident months later, which explicitly calls upon the integrity, resilience and heretofore undefined commitment of both characters. As the production moves back and forth between the nascent days of Sara and Callie’s attraction, and the “after,” which must necessarily change everything, we can follow the halting emotional and spiritual investment the characters make in one another, finding it as relatedly imperfect as our own unpredictable experiences.

This audience engagement and transferability would be impossible without the terrific performances of Pallozzi and Anderson. The former: the tall, physically graceful Callie, a paradoxical character with zero self-certainty. The latter: a diminutive, bubbly Sara, who nonetheless possesses an inspiring level of trust in her own instincts. 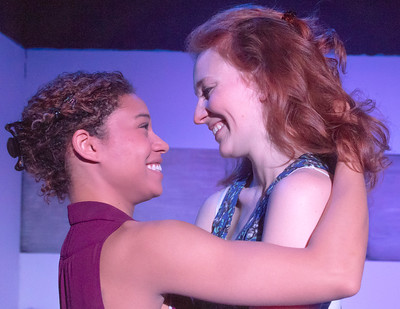 The two actresses create fully-formed, recognizable people. We know why Callie fills her schedule with dinners and parties – so she doesn’t have to do the frightening, quiet thinking. We equally understand what Sara is risking by falling in love with her new friend – her entire Midwestern, girl-next-door identity. But most importantly, the audience believes it when the women finally drop all exhausted pretense and surrender to each other. The scene where Callie and Sara finally wrap themselves in an urgent, passionate kiss is earned and cathartic for everyone in the room.

Which makes the next few minutes, never actually shown on stage, so harrowing. We hear about the sequence of events from a stunted, terrified Callie, who must simultaneously grapple with injury, fear for her lover, and being outed by the media. Sara, incapacitated and at the mercy of loved ones with conflicting agendas, can no longer be Callie’s leader. That her faith in love is ultimately rewarded does nothing to erase the challenges the two must face long after play’s end.

Stop Kiss packs a lot of emotion and action into an hour and a half. Its conclusion, deliberately uncertain, is not without hope. I’m still daydreaming about Callie and Sara’s future, despite awareness of the physical and social challenges that await. That’s the best, most universal kind of American drama — one that stays with you long after you’ve left the theatre.