The cast of ‘Sunday in the Park with George.’ (Photo: Matthew Murphy via The Broadway Blog.)

“White. A blank page or canvas. The challenge: bring order to the whole.”

These words embody the gauntlet thrown down before generations of artists. The opening line of Stephen Sondheim and James Lapine’s musical, Sunday in the Park with George, resonates deeply in the Broadway revival that christens the historic re-opening of the Hudson Theatre.

Starring Jake Gyllenhaal as George (both in Act One’s late 19th century setting and as George’s namesake great-grandson in Act Two, set in an American art museum in 1984) and Annaleigh Ashford as his muse Dot, and later, as George’s maternal grandmother, Marie, Sunday in the Park with George remains one of writing team’s most iconic works. More than 30 years since it debuted at Playwrights Horizons and countless productions worldwide, the musical strikes a resonating chord—both in terms of its exploration of the creative (and often obsessive) process of making art, as well as the personal relationships that can crumble in its wake. Jake Gyllenhaal and Annaleigh Ashford in ‘Sunday in the Park with George.’ (Photo: Matthew Murphy via The Broadway Blog.)

Inspired by George Seurat’s painting, “A Sunday on La Grande Jatte,” Sondheim used the artist’s technique, later named Pointillism, as a musical springboard to create the score. It is filled with staccato punctuations (further accentuated by Gyllenhaal’s delivery) and contrasting lush melodies, which encapsulates the sum on the parts. Michael Starobin’s orchestrations and music direction by Chris Fenwick beautifully capture Sondheim’s work as delivered by a stellar cast of Broadway veterans.

Seurat died at the age of 31 and, at least according to the script, never sold a painting in his lifetime. The tragedy of his artistic tenacity and a world not quite ready to accept his creative gifts is the stuff that great musicals are forged from and it’s no surprise that Sunday in the Park with George won the 1985 Pulitzer Prize for Drama. Director Sarna Lapine mines the material for its wealth of treasures, shedding new light and nuance.

There is a purposefully broken current of electricity between George and Dot, interrupted by his nearly manic artistic pursuits. Gyllenhaal leans heavily into this neurosis, but unlike so many film actors that have stumbled onstage before him, he embodies George’s physical precision all the way through the tip of his imaginary paintbrush. Ashford approaches Dot with flirty mischief. Beautiful as she is, she is able to convince us that she’s less than society’s norms, uneducated and increasingly curvy as she carries George’s bastard child. A Tony Award winner for You Can’t Take it With You and nominee for Kinky Boots, Ashford is adept at interpreting lyrics and Sondheim gives her a full sandbox to play in. Gyllenhaal, too, is not afraid to approach the score with riveting intensity. Jake Gyllenhaal in ‘Sunday in the Park with George.’ (Photo: Matthew Murphy via The Broadway Blog.)

Casting directors Carrie Gardner and Stephen Kopel have assembled a top-notch ensemble to support Gyllenhaal and Ashford, including Penny Fuller as George’s mother (Old Lady) in Act One and Blair, an art critic, in Act 2; and Robert Sean Leonard as Jules, a successful artist in Act One, and Bob Greenberg, a museum director in Act 2. Other recognizable faces include Ruthie Ann Miles (The King and I, Here Lies Love), Brooks Ashmanskas (Bullets Over Broadway) and Jenni Barber (Wicked, Annie).

Act 2, which has often been problematic in past productions, jumps to 1984, where George (Dot’s great-grandson) is struggling with creative blocks after years of success with a series of Chromolume art installations (one of which is brilliantly conceived by lighting designer Ken Billington for a show-stopping moment). Ashford, now in a wheelchair as the aging Marie, captivates with a Charleston drawl that imbues her reflective “Children and Art” with a bluesy, languid warmth that will bring tears to your eyes.

This production of Sunday in the Park with George found footing last year as part of New York City Center’s Encores! series. Its physical presence still feels lean, with a simple set by Beowulf Boritt and projections designed by Tal Yarden. Costume designer Clint Ramos opts for a plain Pantone palette and one wishes Seurat himself could have gotten his hands on the designs to offer as much depth as the production warrants.

For anyone that has questioned the value of his or her creative expression, Sunday in the Park with George will hit a raw nerve. Like Seurat’s masterful paintings, the musical’s beauty is in its ever-changing perspective. “Order. Design. Tension. Balance. Harmony,” says George before the show’s resounding end. On the page, these words appear so simple. But it takes masters like Sondheim and Lapine to bring them to life. 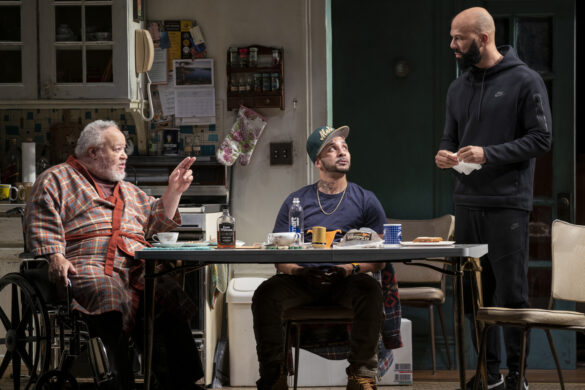