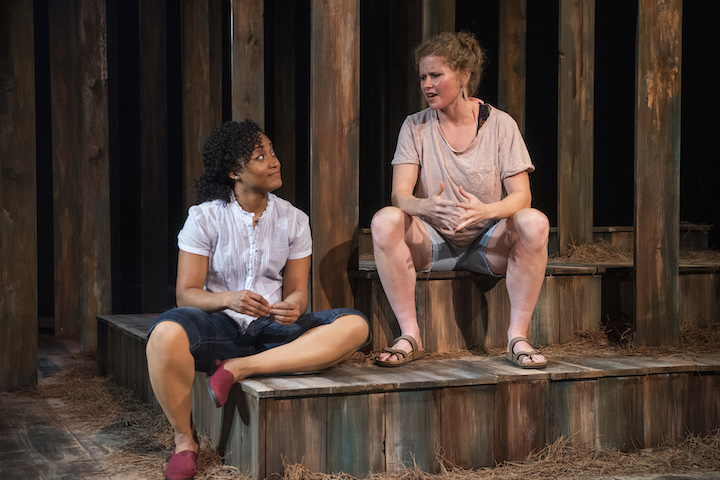 Rachel Bonds’ Sundown, Yellow Moon lacks the clarity of a moonlit night. Instead, its plot and characters are somewhat hazy and feel just out of reach. If the playwright had either expanded on her script or edited it down, Sundown, Yellow Moon could have been a quiet but powerful family drama, instead of a 95-minute handful of scattered thoughts.

Directed by Cody Estle, Sundown, Yellow Moon follows twin sisters Ray (Liz Chidester) and Joey (Diana Coates), who’ve returned to their childhood hometown in Tennessee for an extended visit. The women’s recently divorced father Tom (Will Casey) has been suspended from his beloved teaching job due to a violent incident, and his future is uncertain. As struggling songwriter Ray and overachiever Joey reconnect with people from their past, they recall the songs that have always brought them home.

Sundown, Yellow Moon is female-driven, with two protagonists who are emotionally close but very different: Ray has recently quit her job for mysterious reasons and can no longer connect with the music that once meant so much to her. Meanwhile, Joey keeps to a vegan diet, is a dedicated runner, and will soon leave for Berlin on a Fulbright. If these characters sound cliché, it’s because they are. 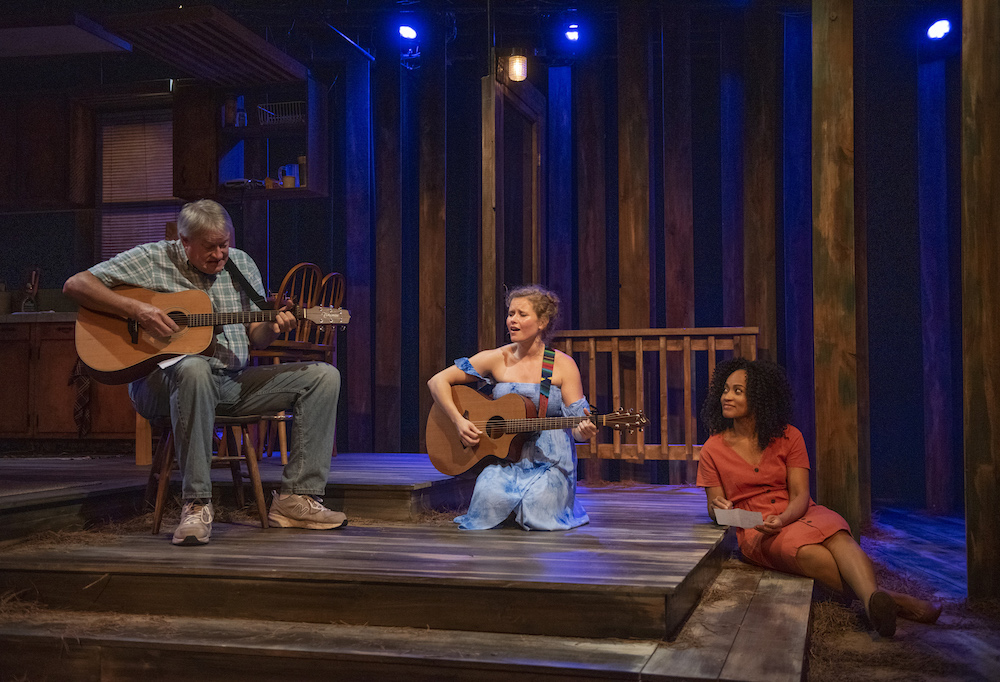 Bonds also doesn’t fully establish Tom’s issues, even as the character receives daily in-home counseling from Carver (Jordan Dell Harris), a former musician who went to Catholic school with Ray and Joey and is dealing with his own trauma. Depression is hinted at (Tom rarely leaves the house), as are anger issues (though these are often recurring and don’t culminate in a single incident). Ambiguity can be done well – in Proof, the audience never knows Robert’s diagnosis – but as with Ray and Joey, Bonds fails the characters she could have championed.

The other major issue with Sundown involves music, which is a significant part of Ray, Carver and Tom’s lives. With songs penned by married duo The Bengsons, Sundown is marketed as a play with music. (Production ads even feature Chidester holding a guitar.) However, the role of music is a cameo at best. Other than an extended sequence featuring actor-musicians Rob Frankel and Jeanne T. Arrigo as family friends, music isn’t really incorporated and therefore, the play’s closing song, while very pretty, feels unearned.

Despite a script that feels unfinished, Raven Theatre’s Chicago premiere has its bright spots. Chidester brings her signature lilting vocals and her Ray is appropriately full of angst. Coates’ Joey has both the charisma and drive befitting a woman who doesn’t know anything other than success but is lacking in her personal life. Josh Odor has a few rewarding moments as Ted, a struggling poet-turned-professor who forms an unexpected connection with Joey. Additionally, Jeffrey D. Kmiec’s set is down-home and lovely, conjuring rural Tennessee with simple beams of wood and tufts of dried grass.

There’s a lot to be said for a little ambiguity, but the end of Sundown, Yellow Moon feels like Bonds ran out of ideas to give her characters the closure they deserve. The play is overrun with long two-person scenes that meander with endless dialogue about Popsicles and the Cheshire Cat rather than expanding on a theme. Is Sundown, Yellow Moon about the complex relationship between sisters? The consequences of our life choices? How a well-written tune can save us all? In Bonds’ current incarnation, the audience will never know.