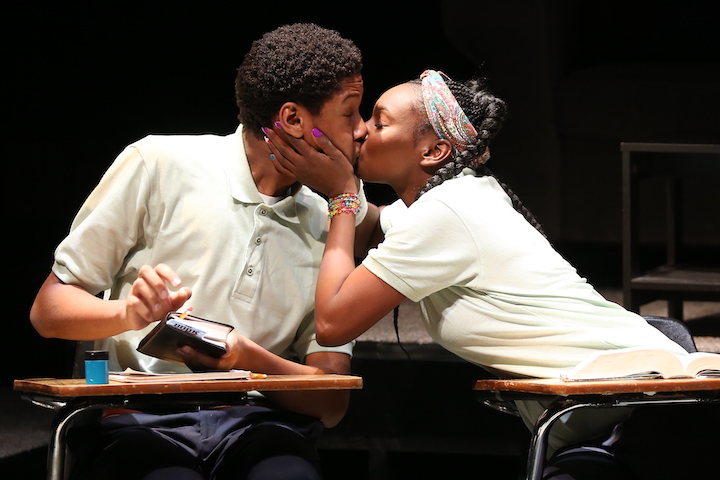 In a world that often times feels like it is crumbling before our eyes, it is hard to disparage art that holds kindness to the light. However, just the sentiment is not necessarily impactful. Deeds are what we need. We need action, particularly in the theater. Keen Company’s Surely Goodness and Mercy offers a kernel of kindness but collapses under the apathy that creeps upon us in the absence of passion.

The story of an unconventional 12-year-old boy named Tino (Jay Mazyck) in Newark, New Jersey, Surely Goodness and Mercy wants to look at selflessness, faith and determination. Tino’s mother has been killed, and he’s now living with his Auntie Alneesa (Sarita Covington), the epitome of fear and ignorance all wrapped up in overt anger, abuse and selfishness.

Tino’s few relationships at school include the gruff but ultimately benevolent lunch lady, Bernadette (Brenda Pressley), and an unlikely new friend Deja (Courtney Thomas). Although vexing to his aunt, Tino finds solace at a local church, where he hears a glimmer of acceptance in the distant voice of the preacher. At school, Tino notices what the rest of the student body and staff fail to see: Bernadette is in pain and trying to hide it. He throws himself, enlisting the somewhat confused and disengaged Deja, into helping Bernadette through tirelessly researching her condition and searching for ways to get her the medical care she needs. 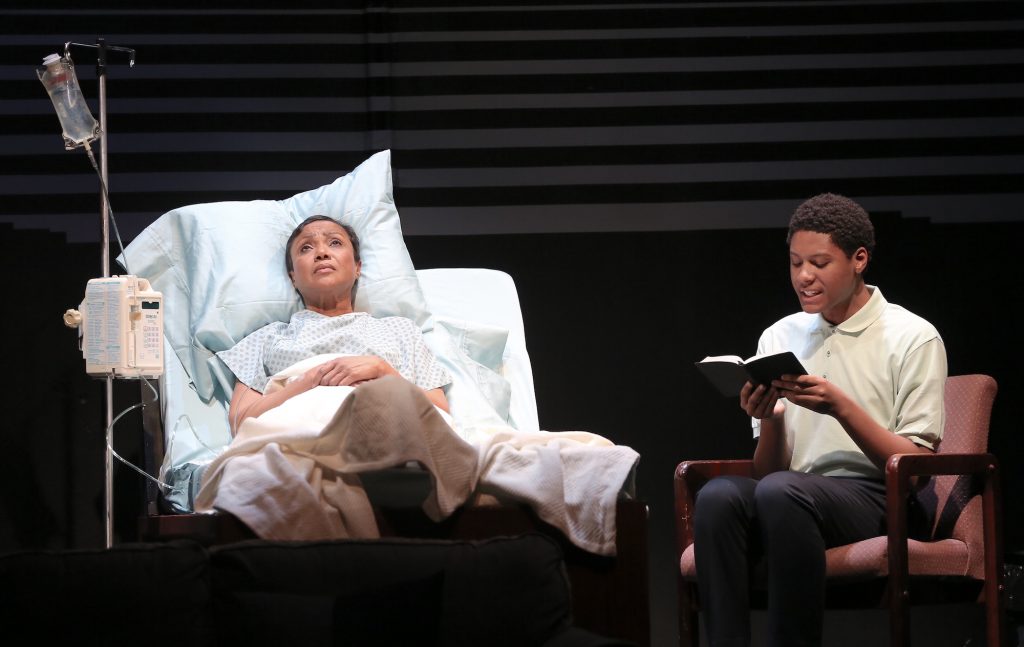 Playwright Chisa Hutchinson’s plot brims with potential power. However, the characters never develop beyond sketches. We learn that Tino’s mother has been shot, but there’s no deeper exploration as to the boy’s calling to bravely swim against the stream. The powerful message of compassion lacks emotional connection, and often times comes off preachy both literally (in voice-over sermons from a preacher) and figuratively, as we’re told but not shown the spiritual impact of love and kindness. It doesn’t help that adults portray the two main characters who are meant to be pre-teens, further distancing us from any sense of authenticity.

Mazyck delivers faint moments of thoughtfulness, offering glimpses into a boy’s life filled with deep pain, but they’re few and far between. Covington’s performance as Tino’s too-cool-for-school friend is riddled with childish mannerisms. Director Jessi D. Hill’s static and monotonous pacing makes the proceedings feel more like a staged reading rather than a fully realized performance.

Design elements offer little to enhance the disappointingly flat production. Lee Savage’s scenic design makes efficient use of Theatre Row’s Clurman Theatre but does little to set the mood. Sadah Espii Proctor’s sound design was technically troubled at the performance I attended, in addition to the awkward decibel of voice-overs.

Keen Company’s latest production requires mercy, indeed. But those paying Off-Broadway prices for a work not ready for the stage might not be feeling such goodness in their hearts.