Top Posts
‘Company’ to Hit the Road on North American...
Meet the Full Cast of ‘Shucked,’ Coming to...
Full Cast for ‘Parade’ Announced
Stephen McKinley Henderson Gives the Performance of His...
The McKittrick Hotel Announces the Return of ‘The...
Broadway Stars Honored with Academy Award Nominations
Taylor Trensch, Danny Wolohan, and More Join the...
A Gay Road Trip Comes to The Brick...
Maude Apatow of ‘Euphoria’ is the Next Audrey...
Tony Award Winners to Star in ‘Hercules’ at...
Home Beyond Broadway Unhinging the American Dream: Goodman Theatre’s ‘Sweat’
Beyond BroadwayReviews 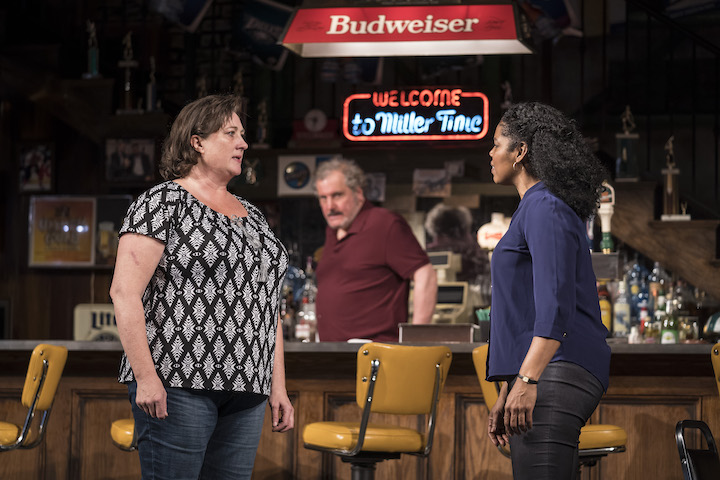 On the one hand, the decimation of rural economies through globalization and the offshoring of manufacturing jobs cannot be denied. At the same time, fiscal pain has served to provide coded cover for ugly class warfare and systemic racism that predates the North American Free Trade Agreement (NAFTA).

Nottage’s play, which premiered at Oregon Shakespeare Festival and eventually migrated to Broadway, tackles ““the collision of race, class, and friendship at a pivotal moment in America,” with the action unfolding in two distinctly important 21st Century years: 2000 and 2008. The leaps back and forth through time show a country in two very different places. 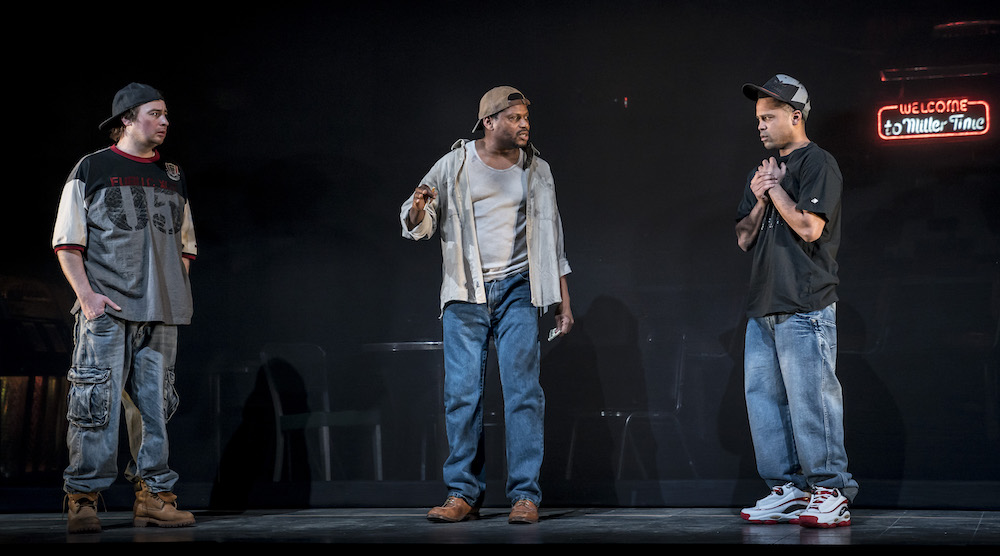 In 2000, the United States had not felt the full pain of NAFTA and its crippling of the blue collar workforce. We had yet to experience the 9/11 terrorist attacks, the dot com bust, a housing market implosion and an ensuing, not coincidental spike in opioid addiction that followed these events.

By 2008, we had waved goodbye to Clinton’s budget surpluses, years of relative international peace and the promise of economic stability for those willing to work hard and pay their union dues. The methodical union busting that swept through American industries following NAFTA’s passage drives much of the action in Ms. Nottage’s electric script.

Veteran Ron OJ Parson returns to direct Goodman Theatre’s rendering of Sweat. The story examines the lives of two generations of friends in a Pennsylvanian Rust Belt town just before, during and after everything about the community’s economic rubric changes. Where generations of residents once moved from high school graduation to factory floor, guaranteeing good wages, a pension and ability to provide for their families, NATFA demanded the acceptance of a new paradigm. Relocated production and the undercutting of worker bargaining which had driven the expansion of the middle class since the end of World War II became the new normal. Opportunities and bank accounts shrank while the temptation to scapegoat “others” (typically immigrants and Americans with brown skin) proved irresistible.

The suffering caused by these forces are given names and faces by Ms. Nottage and the Goodman cast. As the play opens, Tracey (Kirsten Fitzgerald) is a single-income widow trying to raise her son and fellow factory employee, Jason (Mike Cherry) to follow a career path she’s not fully aware is endangered. Cynthia (Tyla Abercrumbie) is estranged from her drug-addicted husband Brucie (Andre Teamer) and in pursuit of a promotion that ends up costing her more than she imagined. Cynthia’s son Chris (Edgar Miguel Sanchez) is ambivalent about his mother’s desire to see him become the first member of their African-American family to go to college. The youthful lure of fast money unites Chris and Jason in friendship until racial tensions explode and send the young men down very different paths. 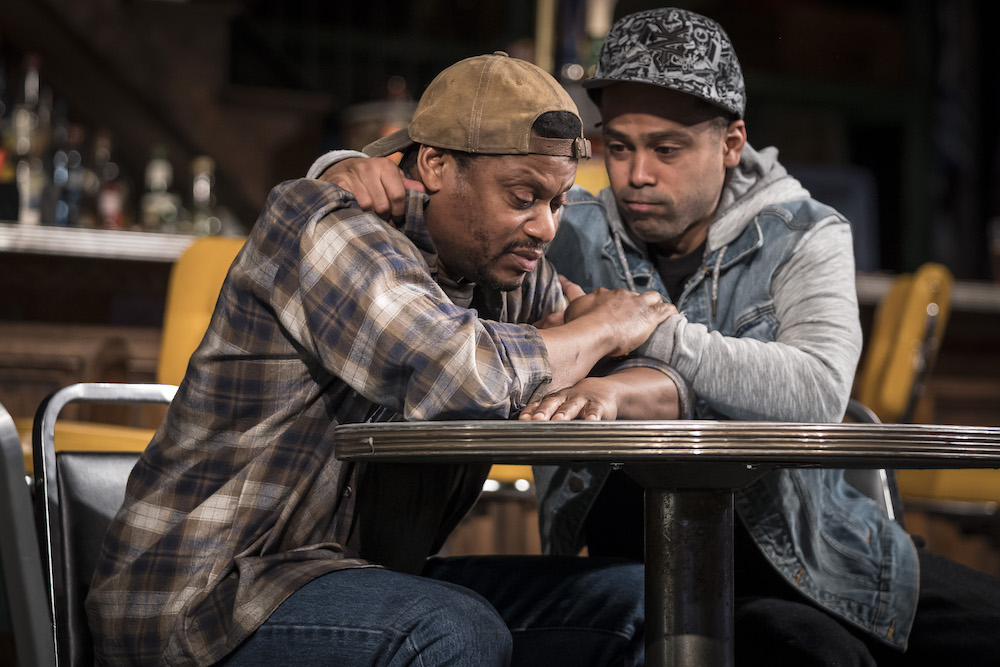 The trope of a neighborhood working-class bar weaves these narrrative threads together. Operated by Stan (Keith Kupferer) and his assistant Oscar (Steve Casillas), it’s an establishment where everyone knows your name and will buy you a drink. At the same time, audiences are aware that the watering hole provides a place to defer private alienation and pain. In one terrific scene, Tracey and Cynthia’s friend Jessie (Chaon Cross) reflects on a youth spent deferring hippie wanderlust under the belief that there would be time (and money) later. Instead, Jessie’s middle-aged years find her broke and stained with a reputation as the town drunk.

The cast is uniformly superb. Owing to terrific dialogue and performances, an act of violence perpetrated by Jason and Chris that changes the course of every character’s life is foreseeable, yet tragic and wasteful in so many ways. The event’s predictability in no way lessens the emotional punch.

Curious to read more about playwright Lynn Nottage? Check out this League of Professional Theatre Women interview and our recent review of one of Nottage’s other works Crumbs From the Table of Joy.