Top Posts
‘Company’ to Hit the Road on North American...
Meet the Full Cast of ‘Shucked,’ Coming to...
Full Cast for ‘Parade’ Announced
Stephen McKinley Henderson Gives the Performance of His...
The McKittrick Hotel Announces the Return of ‘The...
Broadway Stars Honored with Academy Award Nominations
Taylor Trensch, Danny Wolohan, and More Join the...
A Gay Road Trip Comes to The Brick...
Maude Apatow of ‘Euphoria’ is the Next Audrey...
Tony Award Winners to Star in ‘Hercules’ at...
Home Hot Ticket Don’t Miss: TedX Broadway 2020
Hot Ticket 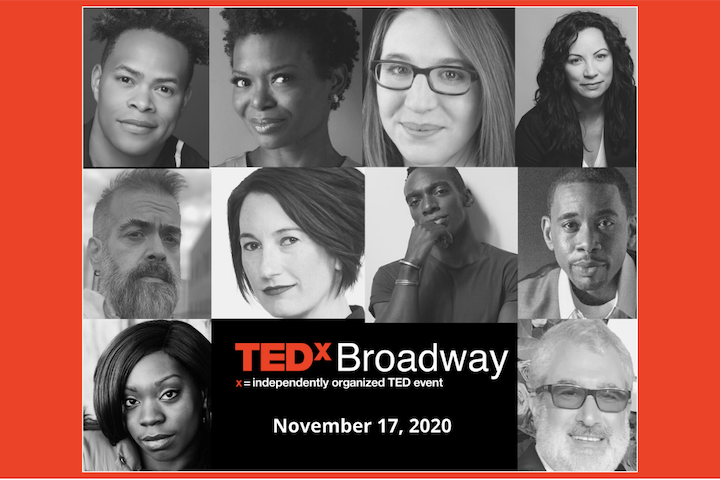 “If ever there was a time we needed to come together to share ideas and insights on what the best Broadway can be, it’s now,” says TEDxBroadway Co-Founder Jim McCarthy of Goldstar and Stellar. “We’re more keenly aware of the urgency of our mission than ever. This year’s speakers are exactly the voices we need to hear to steer the industry we love and embolden the entire Broadway ecosystem.”

Bruce Barish is the fourth-generation owner of Ernest Winzer Cleaners, the premier dry cleaner for Broadway’s costumes since 1908. Bruce graduated from Pace University in January 1986 but has worked at Winzer cleaners since early in his childhood. In keeping with his grandfather’s service philosophy, Bruce takes personal responsibility for seeing that Winzer always satisfies the demands of its most discriminating customer. At the 72nd Annual Tony Awards, Bruce accepted an Excellence in the Theatre award on behalf of the family business.

David Gallo has designed over 30 Broadway productions, including Jitney (Tony nomination), Memphis, First Date, The Drowsy Chaperone (Tony award for Best Scenic Design of a Musical), Gem of the Ocean (Tony nomination), Radio Golf (Tony nomination), The Mountaintop, Reasons to be Pretty, Xanadu, Company, Thoroughly Modern Millie, and many others. He has won virtually every theater award he has been eligible for.

His designs for Blue Man Group have been seen by millions, and the Illusionarium dinner show he created for Norwegian Cruise Line was a pioneer in shipboard immersive entertainment. His work for Stage Entertainment, Disney, DreamWorks, Nickelodeon, PBS, Atlantis, S2BN, and others is seen daily in a dozen cities worldwide.

Hassan Sayyed is the founder of Haus Urban, a natural line of skin and body care formulated for the professional performer. A former actor, his need for a bath soak turned into a realization that performers didn’t have the knowledge or tools to keep their bodies and faces up to the daily rigors of a life lived on stage or on screen. What started as a simple gift for castmates has become a full range with a dedicated cult following of TV and Broadway performers, high-profile makeup artists, pro athletes and multi-platinum recording artists. Becky Leifman is the Executive Director of CO/LAB Theater Group. She is also a Teaching Artist for CO/LAB and is currently the Treasurer and a Steering Committee member for the Museum, Arts, and Culture Access Consortium. She has previously worked at The Keswell School as an instructor and provided one-on-one support for two individuals with disabilities. Becky has various professional experience at arts organizations; she founded Two Lights Theatre Company (Chicago) in 2007 and worked for The Acting Company and The Play Company in their respective development departments. She has independently consulted with SUMMERTIME Gallery, the Broadway Advocacy Coalition, and multiple budding theater companies. Becky has produced shows, including Sarah Ruhl’s translation of Three Sisters, Ross Mueller’s Construction of the Human Heart and the Off-Broadway musical, Peter & I.

Brian Moreland is a creative lead commercial producer based in New York City. Brian is also one of five Black producers for Broadway, with a passion for universal stories while blending marginalized people and topics with entertainment. Previous Broadway credits include The Lifespan of a Fact with Daniel Radcliffe, Cherry Jones and Bobby Cannavale; Sea Wall/ A Life with Jake Gyllenhaal and Tom Sturridge; and The Sound Inside with Mary-Louise Parker, to name a few. 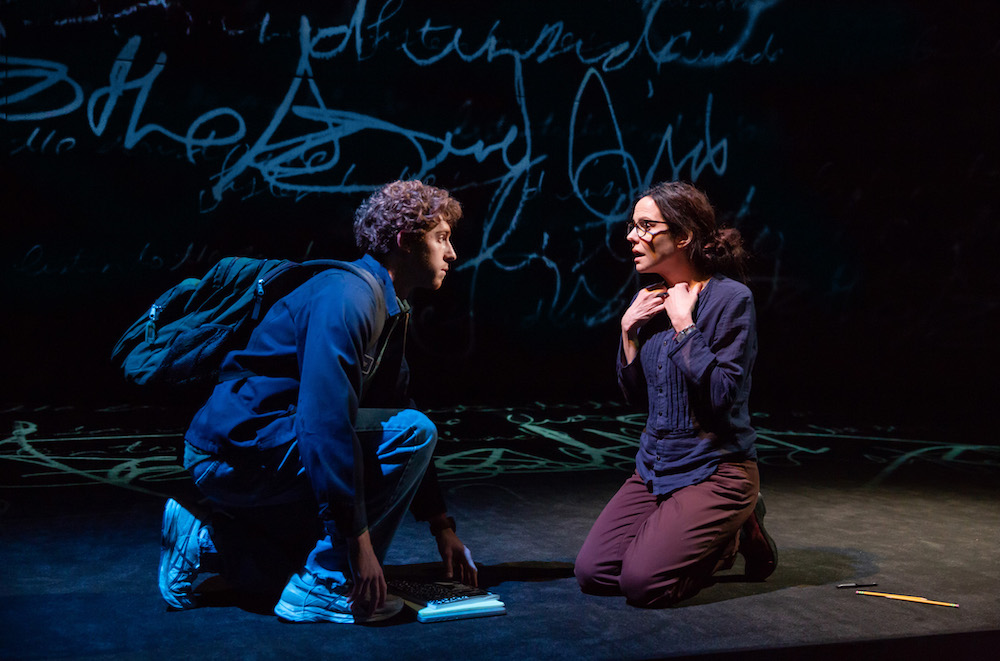 (l to r) Will Hochman and Mary-Louise Parker in ‘The Sound Inside.’ (Photo: Jeremy Daniel)

Brian is an active member of the Broadway community. In addition to volunteering his time for the Theatre Development Fund, he is also a Trustee of the Board for Broadway Cares Equity Fights Aids and proudly serves on the Board of Governors for The Broadway League.

Stephanie Riggs, a former Disney Imagineer and Refinery29/Vice Media Experiential Creative Director, has been bridging storytelling and immersive technology for over two decades through ground-breaking projects across theatre, film, experiential and XR. Her collaborations with international corporations (Instagram, Google, Netflix, Amazon), start-ups (InceptionVR, JauntVR, Lightframe.co), non-profits (IndieFlixFilms, The Nantucket Project), and academia (Yale Blended Reality Lab, NYU Future Reality Lab) have pushed the boundaries of technology and story. She explores learnings from these experiences in her acclaimed book, “The End of Storytelling,” and presents a powerful new paradigm for narratives in immersive technology. Passionate about inspiring diverse, interdisciplinary teams, Stephanie frequently mentors and speaks around the world.

Daniel J. Watts, who recently starred as Ike in the hit Broadway musical TINA (Outer Critics Circle Award), has appeared in nine Broadway shows, including Hamilton, Memphis, and After Midnight. He received the Barrymore Award (Peoples Light) and the LA Ovation Award (Geffen Playhouse) for best featured actor for his portrayal of Sammy Davis, Jr. in Lights Out: Nat King Cole opposite Dulé Hill.  Off-Broadway he has starred as the title character in Suzan-Lori Parks’ Death of the Last Black Man in the Entire World AKA The Negro Book of the Dead (Signature Theatre) & Whorl Inside A Loop (2nd Stage).

Stephanie Ybarra began her tenure as Artistic Director of Baltimore Center Stage in 2018 after serving seven years as Director of Special Artistic Projects for The Public Theater in New York. Her career spans over two decades and includes roles at Dallas Children’s Theater, Dallas Theater Center, Yale Repertory Theater, Two River Theater Company, and Playwrights Realm. Recent awards and honors include the 2018 Nation Builder Award from the National Black Caucus of State Legislators as well as being counted among the Yerba Buena Center for the Arts 2019 YBCA 100. She is on faculty at The Juilliard School and serves on the boards of The Make Believe Association and Citizen University. Stephanie holds an MFA from Yale School of Drama.

TEDxBroadway will also shine the spotlight on community organizations working tirelessly on behalf of so many, including Broadway Advocacy Coalition, Broadway Cares/Equity Fights Aids, The Actors Fund, Be An Arts Hero and many more.

“Of course, we wish we could see everybody at New World Stages, which has been our home for the last eight years,” adds Damian Bazadona, TEDxBroadway Co-founder and President of Situation. “Having to make this an online event, we’re embracing the opportunity to welcome a global audience. We’re trying to break down every barrier to expand the conversation and engage a wider array of people. We’re not limited by seating capacity this year, and we’re offering three ticket price options — all to make sure that those who want to be involved can be.”

A general admission ticket for the event is $40. TEDxBroadway Organizers invite those who are able to purchase a $100 ticket to help subsidize others in our community who’d like to attend but are significantly impacted by the shutdown. Those who are impacted can register for the free ticket lottery. All tickets to TEDxBroadway 2020 are available here.

TEDxBroadway will livestream exclusively on Stellar. 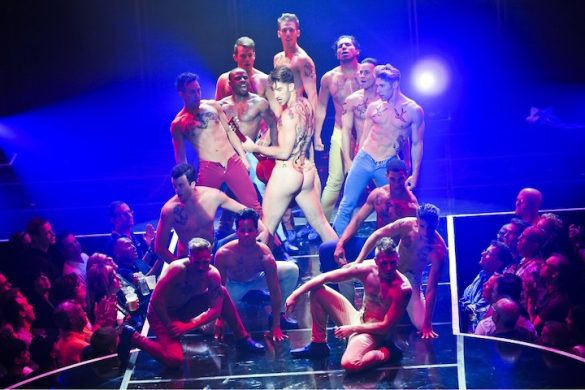 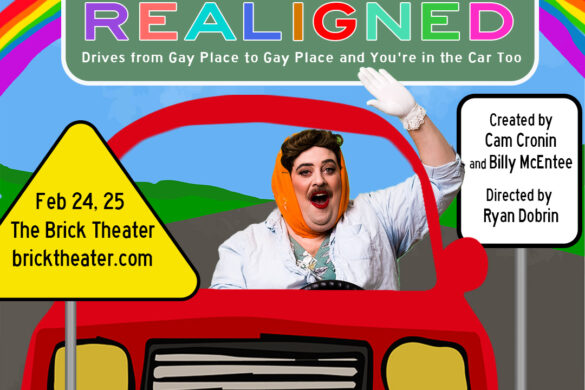