Top Posts
Broadway Review: ‘Skeleton Crew’
‘B is for Broadway’ Feb 1 Release to...
Broadway Photographer Matthew Murphy Heads Underground to Help...
Keala Settle Heads to West End to Join...
‘The Kite Runner’ Heads to Broadway for Limited...
First Look at Audible’s ‘Long Day’s Journey Into...
Robert Cuccioli Stars in ‘A Touch of the...
Tim Rice Teases that ‘Chess’ May Come to...
‘Girl From the North Country’ Announces Closing, Sort...
NYC Broadway Week 2-For-1 Tickets Now on Sale
Home Buzz TedXBroadway Recap: What’s the Best That Broadway Can Be?
Buzz 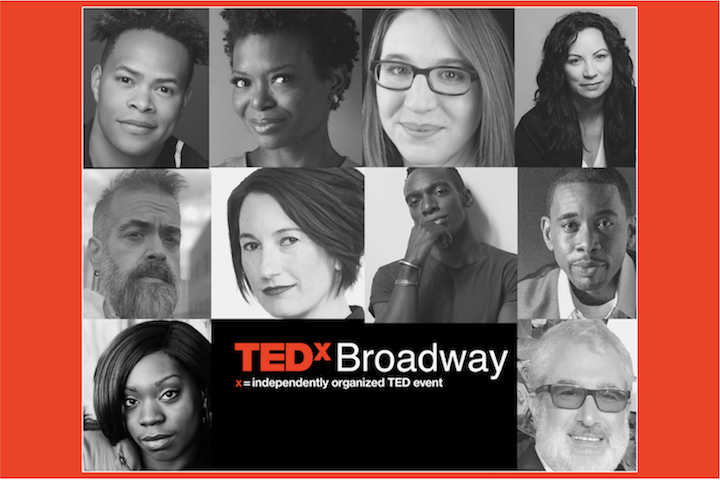 Live theater continues to take a longer than expected intermission. Yet over the past several months, the creative team behind TEDxBroadway has been planning for their ninth annual conference, which was held virtually on Tuesday, November 17.  Stellar, a new live streaming service that launched earlier this year, served as the platform for the event. Jim McCarthy, CEO of Goldstar and Stellar, and Damian Bazadona, CEO of Situation digital agency, hosted the two-hour discussion that asks, “What’s the best Broadway can be?”

Resilience and patience were the recurring themes throughout as speakers navigated the uncertain road ahead for live performance.

Tony Award winner LaChanze opened the day by discussing her own experiences with finding resilience. As a 9/11 widow, a divorcee, and an actor who has had to adapt to constant rejection, she’s become quite skilled at seeking it. She spoke of her family’s recent challenges with COVID-19. “During the pandemic, we had to sit and be by ourselves, and we’ve learned a lot about ourselves in that time,” she said, adding, “Instead of constantly doing, we must focus on just being. That is when the battery gets recharged.”

Becky Leifman showed us the importance of saying “Yes and…” to obstacles and opportunities. Leifman is the Executive Director of CO/LAB Theater Group, “a nonprofit that offers individuals with developmental disabilities a creative and social outlet through theater arts.” Leifman was a theater major who grew weary of resistance. As a result, she founded her own theater company that is welcoming and “will work with whatever actors bring into the room.” “By saying ‘Yes and…’, you end up creating, learning, and celebrating yourselves and each other,” she said.

Stage and screen star Vanessa Williams delivered a brief but powerful pre-recorded message on behalf of Black Theatre United, a new organization that serves to “protect Black people, Black talent and Black lives of all shapes and orientations in theatre and communities across the country.”  Williams stated, “This pandemic of 2020 is an opportunity for Broadway to re-set and commit to an anti-racist system of practices so that we can come back better.”

We caught a glimpse into the theater’s future through David Gallo, a Tony award-winning scenic designer who suggested environmentally sound seats that continually pump fresh air throughout the space. He acknowledged that it will “take people of great courage to bring us forward.”

Hassan Sayed gave us a lesson in self-preservation. After a serious accident, the former actor founded Haus Urban, a line of beauty care products that caters to performers. “Do an investigation into yourself for self-care,” he said. “You can’t change the paradigm and have a seat at the table if you can’t be compassionate with yourself.”

Broadway producer Brian Moreland and Stephanie Ybarra, Artistic Director of Baltimore Center Stage, offered similar sentiments. Moreland encouraged us to make unconditional investments of kindness into other people. Ybarra observed that “in order to be present, build empathy and understanding, we must make ourselves vulnerable. To do so will only increase our imagination and creativity for the future of the American theater.”

Creative director Stephanie Riggs acknowledged that theater has lost so much, but to get it back, we must “diversify relationships, look to the future, and create something new.”

Dry-cleaning Broadway’s costumes is the main job for Bruce Barish, fourth-generation owner of Ernest Winzer Cleaners. His company worked through 9/11, snowstorms, protests, and Hurricane Sandy to meet his client’s needs. “You never get a second chance to make a first impression, and you should always strive to be the best,” he said. That advice is why his company was given a special Tony Award in 2018.

Daniel J. Watts ended the afternoon with a poignant metaphor of painting as life. As he painted with his feet, the Tony nominee spoke about his busy schedule and pre-pandemic success. He referred to those activities as “wet paint” but ultimately realized that he needs to let the paint dry—a symbol of patience to accomplish the work he wants. “Broadway can’t come back. It has to come forward,” he mused. “And when it does, it has to be more expressive with the colors that it uses.”

To watch the conference on Stellar on-demand, click here.