Top Posts
‘Company’ to Hit the Road on North American...
Meet the Full Cast of ‘Shucked,’ Coming to...
Full Cast for ‘Parade’ Announced
Stephen McKinley Henderson Gives the Performance of His...
The McKittrick Hotel Announces the Return of ‘The...
Broadway Stars Honored with Academy Award Nominations
Taylor Trensch, Danny Wolohan, and More Join the...
A Gay Road Trip Comes to The Brick...
Maude Apatow of ‘Euphoria’ is the Next Audrey...
Tony Award Winners to Star in ‘Hercules’ at...
Home Beyond Broadway ‘The Book of Mormon’ Announces New National Tour
Beyond Broadway 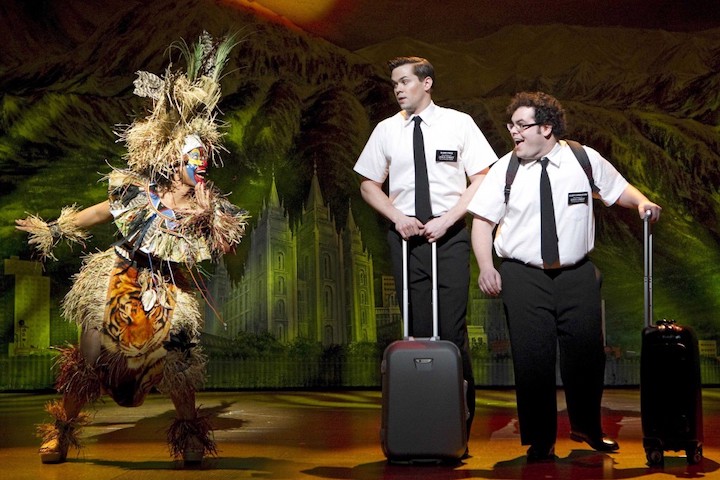 The original Broadway company of ‘The Book of Mormon.’ (Photo: Joan Marcus)

Hello! The smash-hit, Tony Award-winning musical The Book of Mormon has announced a new upcoming tour, with exact dates and cities to be named at a future time. The tour will begin in the fall of this year and will stop in 48 cities in total.

The musical has toured the country before, most recently cutting its national tour short due to COVID. Now, a new tour will start afresh, this time visiting 25 cities the show has never been to before.

The tour will be helmed by Network Presentations, which has previously presented the touring productions of “Anastasia,” “The Prom,” “Fiddler on The Roof,” and other Broadway successes. The exact dates, cities, and casting are still to be announced. Until then, the Broadway musical is playing in New York at its longstanding home, the Eugene O’Neill Theatre.

With a book, music, and lyrics by the creators behind South Park and Avenue Q (Trey Parker Robert Lopez Matt Stone), The Book of Mormon follows two young missionaries sent to Uganda to try to convert citizens to the Mormon religion. One missionary, Elder Price, is an enthusiastic go-getter with a strong dedication to his faith, while his partner, Elder Cunningham, is a socially awkward but well-meaning nerd whose tendency to embroider the truth soon lands him in trouble. Upon their arrival in Africa, Elders Price and Cunningham learn that in a society plagued by AIDS, poverty, and violence, a successful mission may not be as easy as they expected.

Kevin Clay, Cody Jamison Strand, and Kim Exum currently star in the Broadway production, which has been running since 2011. The musical made stars out of original cast members Josh Gad and Andrew Rannells and took home the Tony Award for Best Musical, along with awards for Best Book, Best Original Score, and Best Featured Actress in a Musical for Nikki M. James, among other awards.