Top Posts
Keala Settle Heads to West End to Join...
‘The Kite Runner’ Heads to Broadway for Limited...
First Look at Audible’s ‘Long Day’s Journey Into...
Robert Cuccioli Stars in ‘A Touch of the...
Tim Rice Teases that ‘Chess’ May Come to...
‘Girl From the North Country’ Announces Closing, Sort...
NYC Broadway Week 2-For-1 Tickets Now on Sale
Brittney Johnson Will Be First Black Glinda in...
Broadway-Bound ‘Paradise Square’ Delays Opening Due to COVID-19
James Monroe Iglehart Joins Cast of Broadway’s ‘Chicago’
Home Beyond Broadway What Happens When the Radioactive Dust Settles: Steppenwolf’s ‘The Children’
Beyond BroadwayReviews 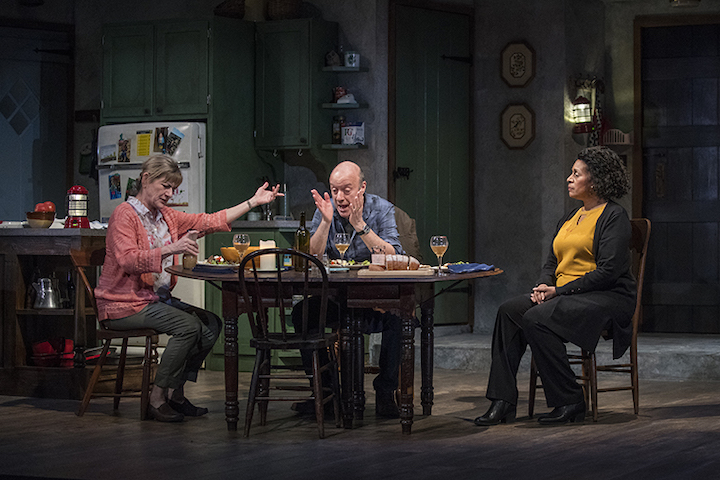 The global immediacy of man-made climate change, the consumptive guilt of the Baby Boomer generation and a renewed confrontation with an old, complicated love triangle. Any one of these themes is more than enough for a production that runs an hour and 45 minutes (no intermission). Steppenwolf Theatre’s The Children is, therefore, too much in all the right ways.

Written by dynamic young playwright Lucy Kirkwood (a Fellow of the Royal Society of Literature’s “40 Under 40” initiative) and directed by celebrated Chicago theater director Jonathan Berry, The Children is the important, funny, socially conscious gut punch I didn’t know I needed.

A 2018 Tony Award nominee for Best Play, The Children opens per press materials, “on a summer evening in an isolated sea cottage in the East of England.” Due to perfectly understated work from scenic designer Chelsea M. Warren, lighting designer Lee Fiskness and sound designer Andre Pluess, this looks and sounds idyllic.

Audiences learn rather quickly, however, that the enviable bohemian lifestyle of married former nuclear scientists Hazel (Janet Ulrich Brooks) and Robin (Yasen Peyankov) is not what it seems. What we witness instead is England’s answer to Chernobyl and two of its architects. Though long retired with four grandchildren and literally vapored dreams of operating an organic farm, the couple’s individual habits communicate a suppressed culpability. Hazel, pushing 70, goes all in on the cult of salads and yoga as the keys to eternal life, as Robin retreats to their abandoned farm to bury dead animals, absorb radiation and weep in peace. Intense stuff.

The stiff upper lip strain worn by Hazel and Robin is intensified with the return of an old friend, colleague and, in Robin’s case, lover. Rose (Ora Jones) materializes on the couple’s seaside driveway, jolting them out a reverie of silent, shared shame, asking the ultimate sacrifice to atone for the mistakes of their collective, careless youth. A carelessness that extends past the confines of old jealousies, rivalries and parenting errors, into the very dirt of their homeland.

On the way to that invitation, audiences are treated to densely packed anger, denial, laughter and one glorious dance. Just three performers carry this production, and their onstage chemistry is the core of its success. Steppenwolf ensemble members Ms. Jones and Mr. Peyankov (who recently dazzled me in the company’s production of A Doll’s House, Part 2) collaborate with Ms. Brooks to deliver an aria of middle-aged existential crisis and a reminder that certain bills are coming due for the Woodstock generation. It’s both appropriate and poignant that an insightful member of Generation X, currently leading the planet after the 20th century’s industrial and nuclear excesses, wrote the piece. 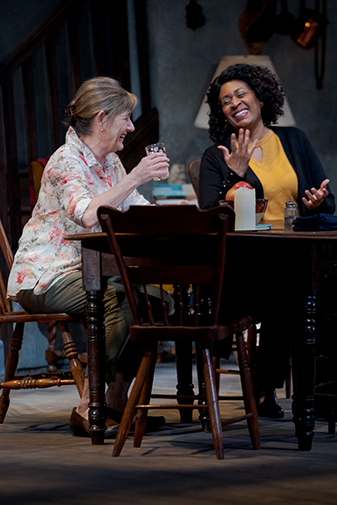 Underneath the monolithic themes that drive the action are so many small, gorgeous moments. Hazel and Rose’s friendship — worn by time, betrayal and illness — yet full of mutual admiration, and as the wine is consumed, bracing honesty. Robin coughs up radioactive blood but opines that his one true regret is a frustrated sexual dalliance with a hot milkmaid. Rose is a breast cancer survivor. Was the disease caused by her career at the power station? Ms. Kirkwood’s script doesn’t say, and Ms. Jones’ portrayal gives nothing away. It is clear from opening to curtain drop that her Rose is in charge of herself as well as the unfolding drama between three burdened old friends.

The Children arrives in Chicago just after the 33rd anniversary of the Chernobyl catastrophe in Soviet Ukraine. It is a haunting reminder that the planet has suffered from the reckless pursuit of scientific dominance, that our kids and grandkids will inherit a diminished future through no agency of their own. And because of the miracles of that same science, many of us have decades ahead to live with — and regret — our sins.

Curious to read more about The Children? Click here to read our review of Manhattan Theatre Club’s Broadway production.