Top Posts
‘Company’ to Hit the Road on North American...
Meet the Full Cast of ‘Shucked,’ Coming to...
Full Cast for ‘Parade’ Announced
Stephen McKinley Henderson Gives the Performance of His...
The McKittrick Hotel Announces the Return of ‘The...
Broadway Stars Honored with Academy Award Nominations
Taylor Trensch, Danny Wolohan, and More Join the...
A Gay Road Trip Comes to The Brick...
Maude Apatow of ‘Euphoria’ is the Next Audrey...
Tony Award Winners to Star in ‘Hercules’ at...
Home Beyond Broadway The Bible as It Was Meant to be Heard: ‘The Gospel of John’
Beyond BroadwayReviews 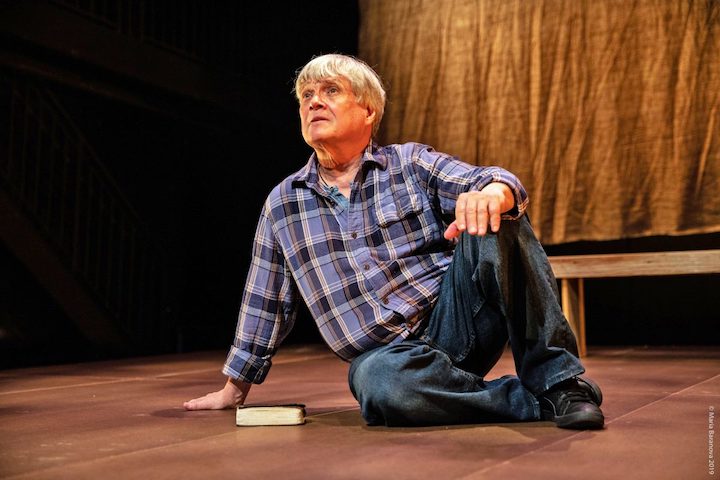 Ken Jennings in ‘The Gospel of John.’ (Photo: Maria Baranova)

A bible and a bench. These are the only two props needed for The Gospel of John, a beautiful one-man show starring Broadway veteran Ken Jennings. In 90 minutes, Jennings describes the basics of the Christian faith, explains who Christ is, and makes a compelling argument for believing in Jesus.

On the outset, it may seem fodder for Bible thumpers. Yet Jennings, who has used the fourth book of the New Testament Bible as his source material, is so nuanced and humble in his performance that even non-believers will be moved by the poetry and the fundamental life lessons that it imparts.

Unlike the first three chapters in the New Testament (Matthew, Mark, and Luke), John’s gospel begins with the adult version of Christ. The others describe his birth and youth. At the beginning of the show, Jennings defines his narrator:

There was a man sent from God whose name was John, called the Baptist. He came to bear witness to the light that all might believe. Through him the true light that enlightens everyone was coming into the world. He was in the world. The world was made through Him, but the world didn’t know Him. He came to His own home and His own people didn’t receive Him. But to all who received him, who believed in Him, he gave power. He gave the right to become Children of God.

Miracles ensue. Jesus turns the water into wine, heals the son of a royal official in Capernaum, feeds a crowd of 5,000 with five barley loaves and two fishes, walks on water, and survives a crucifixion. “Unless you see signs and wonders, you won’t believe,” He tells his skeptics.

Jennings’ delivery is so natural and pure that one feels as though he is speaking directly to each audience member. In that way, he is honoring the way the gospel was first presented. In an interview with Adam Rothenberg, Jennings said, “When this was first written, most of the world could neither read nor write. Oral tradition was much more important. There was a time, long before the Gospel was codified when John would have told the story orally. That’s what I hope to do. Tell the story in a way that John might have first told it.”

Toggling between Christ, his disciples, and the townspeople, Jennings embodies each character with distinction. He is especially poignant when speaking Christ’s lines with calm assurance.

Jennings, best known for originating the role of Tobias in Broadway’s Sweeney Todd, did not initially set out to make this a performance piece. He had been caught up in a custody battle for his 13-year-old son and turned to the book as a means of prayer. He had hoped it would bring solace. Soon, he realized he had memorized the whole book and decided to turn it into a solo show.

The Gospel of John is not your typical theater fare, but when it comes to drama, fewer texts offer more dramatic flair than the Bible. Near the show’s end, Jennings tells us that “Jesus did so many other things. If everything he did were written down, the whole world would not have room enough for the books that would be written.”

Fortunately, Jennings keeps it to a brisk 90 minutes, but what miraculously spent time it is.