Top Posts
‘Company’ to Hit the Road on North American...
Meet the Full Cast of ‘Shucked,’ Coming to...
Full Cast for ‘Parade’ Announced
Stephen McKinley Henderson Gives the Performance of His...
The McKittrick Hotel Announces the Return of ‘The...
Broadway Stars Honored with Academy Award Nominations
Taylor Trensch, Danny Wolohan, and More Join the...
A Gay Road Trip Comes to The Brick...
Maude Apatow of ‘Euphoria’ is the Next Audrey...
Tony Award Winners to Star in ‘Hercules’ at...
Home Reviews Broadway Review: ‘The Little Prince’ Fails to Warrant a Royal Reception
Reviews 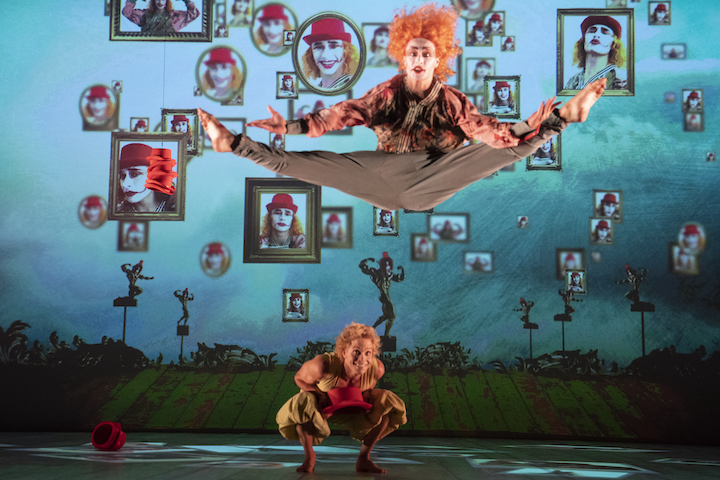 Antoine Marie Jean-Baptiste Roger, comte de Saint-Exupéry, better known as Antoine de Saint-Exupéry, daring aviator, poet, and journalist, experienced many adventures before his 1944 death while flying a mission for the Free French Air Force. Only a year before, his best-known book, The Little Prince, was published in New York, although not in France until the war was over. It ultimately was translated into over 300 languages and has found expression in all media, from radio to television, film to stage, and opera to ballet. Unfortunately, its latest transmogrification is a boringly bland stage production that recently arrived on Broadway.

I cannot say wherein lies the secret of The Little Prince’s continuing magnetic hold, even though I read it to my kids when they were young (it wasn’t part of my own childhood). The book’s artfully vague philosophic musings on such things as loneliness and friendship, illustrated by Saint-Exupéry’s delicate, cartoon-like watercolors, are probably too challenging for most young readers, although it possesses a definite lyrical charm. However, its relative lack of dramatic conflict makes it something of a drag, one of the biggest problems of its latest incarnation, an ambitious French show that has toured internationally since opening in Paris in 2019 and is now playing at The Broadway Theatre for a limited run. 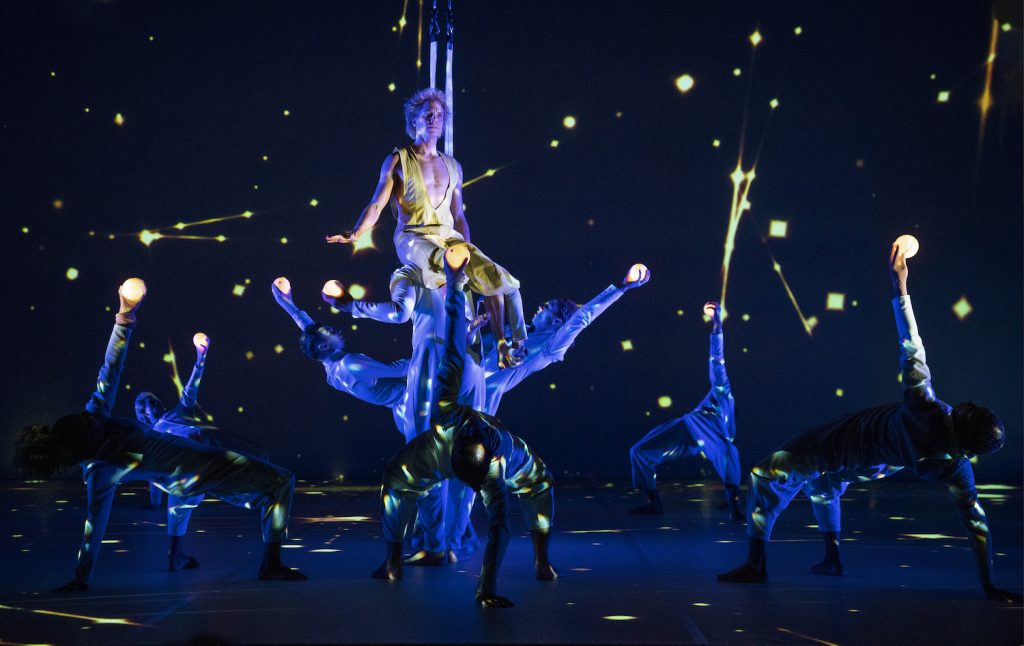 This mingling of music, ballet, acrobatics, and narration—with a Cirque du Soleil aesthetic—forgoes dialogue among the characters in favor of having a narrator speak—recite would perhaps be better—all the lines. This allows the company of acrobat-dancers to express the episodic situations choreographically. Occasionally there is recourse to a Cyr wheel, that staple of circus shows in which a performer rolls around within the framework of a large metal hoop or to balancing on a large ball, but the chief acrobatic devices are aerial silks and hanging ropes. Flying à la Peter Pan is also present, most spectacularly during a curtain call routine in which someone goes soaring over the orchestra—flying effects by Foy—as thousands of red paper hearts snow down on the audience. Pity the poor cleanup crew.

The only voice we hear, the Narrator’s, belongs to Chris Mouron (who wrote the libretto), a middle-aged woman dressed by costumer Peggy Housset in an oddball, swallow-tailed coat, like a would-be ringmaster. Her cropped hair sprayed green, Ms. Mouron’s French accent combines with a melodious rhetorical tone to deliver the text as the cast enacts it. At the end, she displays a lovely voice when she performs — in French (with English titles on the backdrop) — “The Song of the Little Prince,” the sole musical number with lyrics (again by Ms. Mouron, who also co-directed).

This is the familiar story of the Aviator (Aurélien Bednarek) who crash lands in the Sahara Desert and, with only enough water for eight days, sets to fixing his plane. He is visited by a strange, golden-haired boy, the Little Prince (played by a lithe young adult, Lionel Zalachas), an alien who has fallen from a tiny planet. He asks the Aviator to draw him a sheep, but the Aviator’s attempts — brought to life by actors in banal sheep costumes — fail until he depicts a sheep in a crate. Aha! Just what the prince was looking for.

The prince then recounts his life story, including why he needs a sheep; his love for the Rose (Laurisse Sulty), a beautiful but self-involved flower; and on and on through a series of fanciful episodes on different planets, each teaching some sort of lesson in morality and human relations, but most remaining muddily opaque.

The scenes are differentiated by a sequence of video projections designed by Marie Jumelin and programmed by Étienne Beaussart, some visually impressive but none capturing the charm of Saint-Exupéry’s originals. Moreover, the projection screen is too narrow for the vast stage, so it’s framed by black drapes, greatly reducing the effect a smaller space might have provided.

Throughout, Terry Truck’s atmospherically offbeat music — in a vein reminiscent of what one hears at Cirque du Soleil — plays continuously as director/choreographer Anne Tournié keeps her gymnastic dancers rhythmically climbing, flying, flipping, rolling, twisting, leaping, and contorting for an hour and fifty minutes — with a 20-minute intermission. It’s all proficiently done with an international company of skilled performers, but interest in its fanciful, nonspeaking characters and its fantastical situations quickly pales, inspiring Morpheus to compete with The Little Prince to control your drooping eyelids.

While the idea of setting circus methods to a relatively conventional narrative — albeit a highly whimsical one — is not without promise, The Little Prince never achieves the theatrical thrills for which its narrative-lite Canadian forebear is known. With Cirque du Soleil, the narrative thread is little more than an excuse for the performance; with The Little Prince, the performance seeks to serve a narrative that, for all its reputed literary appeal, seems as alien to theatre as the little prince is to Earth.

The Little Prince
Broadway Theatre
1681 Broadway, NYC
Through May 28