Top Posts
‘Company’ to Hit the Road on North American...
Meet the Full Cast of ‘Shucked,’ Coming to...
Full Cast for ‘Parade’ Announced
Stephen McKinley Henderson Gives the Performance of His...
The McKittrick Hotel Announces the Return of ‘The...
Broadway Stars Honored with Academy Award Nominations
Taylor Trensch, Danny Wolohan, and More Join the...
A Gay Road Trip Comes to The Brick...
Maude Apatow of ‘Euphoria’ is the Next Audrey...
Tony Award Winners to Star in ‘Hercules’ at...
Home Beyond Broadway Dancing and Conversation During Difficult Times: ‘The Michaels’
Beyond BroadwayReviews 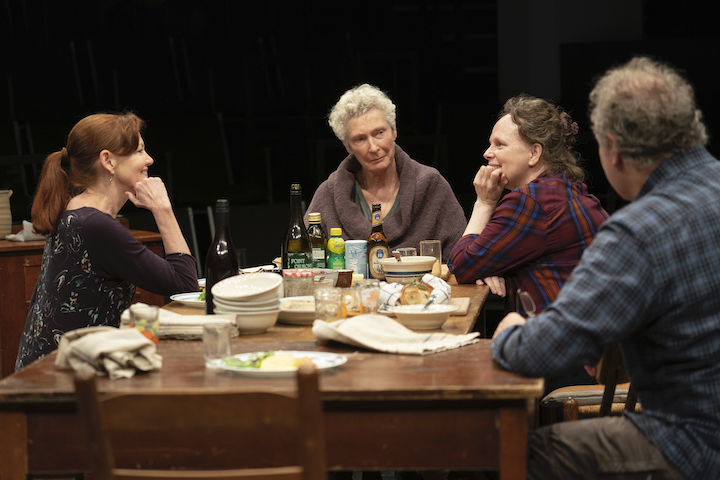 Richard Nelson’s series of plays presenting families in Rhinebeck, New York, casts a spell even when, typically, they lack high drama and emotional fireworks. His latest, The Michaels, which he also directed, again allows us to perch like flies on the wall watching casually-dressed (by Susan Hilferty and Mark Koss), loving, humane characters believably sharing their thoughts, memories, and mutual concerns. Coming in the wake of Nelson’s The Apple Plays and The Gabriels: Election Year in the Life of One Family, however, The Michaels has déjà vu written all over it.

Like the rest of what’s been dubbed “The Rhinebeck Panorama,” everything takes place in a country-house kitchen (designed by Jason Ardizzone-West and lit by Jennifer Tipton). It’s October 27, 2019 (the night the play opened, a typical Nelson device) and, as so often, a meal is prepared (although barely any of it gets eaten). The well-used appliances and wooden furniture dispersed about the theatre-in-the-round setting could easily come from Nelson’s other plays.

Both Jay O. Sanders and Maryanne Plunkett, veterans of the earlier Rhinebeck plays, are again involved, increasing The Michaels’s resemblance to its predecessors, especially since these exceptional actors play roles not unlike those they’ve done before. Plunkett again portrays a school teacher, of history this time, instead of English. And once more the imminence of death looms over a beloved family member.

The liberal politics of Nelson’s characters get only a glancing notice, with Donald Trump receiving his de rigueur lumps. Of principal concern, instead, is the world and art of modern dance. Of the seven characters, only Plunkett’s Kate Harris has no connection to dance, chiefly represented by the semi-retired, autocratic choreographer Rose Michael (Brenda Wehle, perfectly composed), a silver-haired doyenne with terminal cancer.

Kate, a local resident, has replaced a previous companion, Alice, the love of Rose’s life, and become her altruistic caretaker, even though she’s only recently gotten to know her. 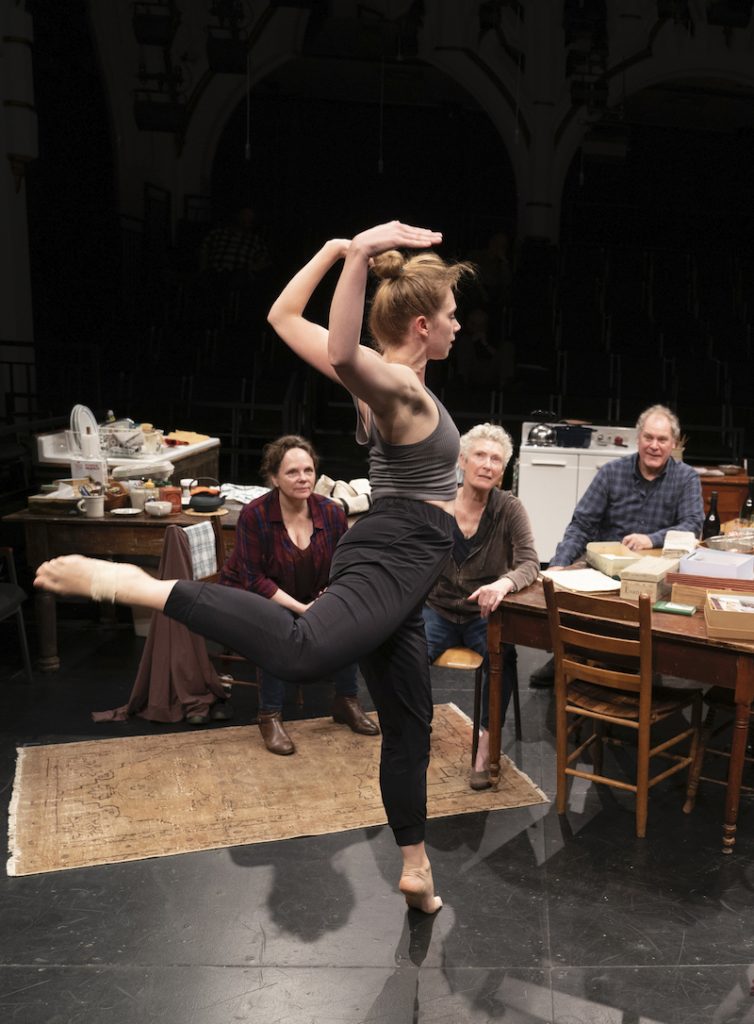 Those familiar with Nelson’s Rhinebeck plays know that they’re going to see interesting, intelligent, unpretentious people sitting around, preparing a meal, setting the table, eating, going for walks or naps, and chatting calmly about family, friends, and matters professional, political, and local (i.e., Rhinebeck). Speaking conversationally, they force you to lean in; you might want to request an assistive listening device before the play begins.

Very little happens. Nelson even writes a passage describing a dance based on a movie, in which all that occurs during a five-and-a-half-hour performance is the cooking of a meal. The minute you hear it, you know it’s a self-conscious nod to his own methods.

Rose’s cancer is the most dramatic element, especially since everyone is concerned about her future, including her illness’s impact on a major commission she’s been contracted for in London. When dance is discussed, the names of influential icons like Martha Graham, Pina Bausch, Anna Halprin, and Yvonne Rainer are dropped.

Several recreations of Rose’s dances (Dan Wagoner did the choreography) enliven the two hours of stage traffic. This includes numbers set to ragtime and blues—expertly performed around the kitchen furniture by Lucy and May, as Rose observes and comments with hawk-like focus.

No false steps are evident in the delicately crafted ensemble, each actor perfectly at home in Nelson’s naturalistic style. And it’s always good to witness upcoming actors, like Sakamoto and Bydwell, who so ably combine thespian with terpsichorean skills.

Those whose family gatherings are more volatile than the ones depicted in the Rhinebeck Panorama may envy such politesse. I can’t help hoping that the promised follow-up to The Michaels will somehow abandon the formula and provide the kind of emotional catharsis that soars in this work’s dances but is generally suppressed in its dialogue. If so, perhaps Nelson can leave Rhinebeck and move on to other dramatic real estate.

The Michaels
The Public Theater
425 Lafayette St., NYC
Through November 24