Top Posts
‘Company’ to Hit the Road on North American...
Meet the Full Cast of ‘Shucked,’ Coming to...
Full Cast for ‘Parade’ Announced
Stephen McKinley Henderson Gives the Performance of His...
The McKittrick Hotel Announces the Return of ‘The...
Broadway Stars Honored with Academy Award Nominations
Taylor Trensch, Danny Wolohan, and More Join the...
A Gay Road Trip Comes to The Brick...
Maude Apatow of ‘Euphoria’ is the Next Audrey...
Tony Award Winners to Star in ‘Hercules’ at...
Home Buzz ‘The Music Man’ Postpones Broadway Opening to May 2021
Buzz 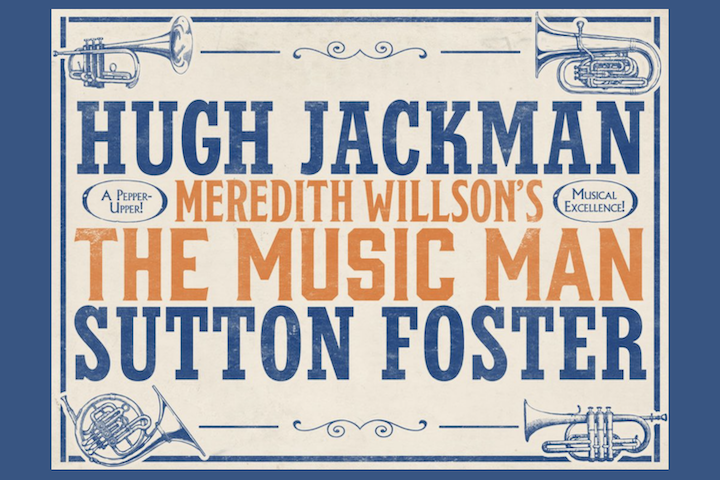 Producers announced today that the start of preview performances and the opening night of the highly-anticipated revival of Meredith Willson’s The Music Man have been rescheduled.  Starring two-time Tony Award, Grammy Award, and Emmy Award-winning star Hugh Jackman as Professor Harold Hill, and also starring two-time Tony Award winner Sutton Foster as Marian Paroo, preview performances of The Music Man are now set to begin on Wednesday, April 7, 2021, with Opening Night scheduled for Thursday, May 20 at the Winter Garden Theatre. As a result of New York State’s ban on large gatherings, rehearsals (which were to have begun June 29), will now commence on Monday, February 8.

“Performing on Broadway is a great honor for an actor; in fact, one of the greatest,” said Hugh Jackman. “No two shows are exactly alike, in large part due to the audience. Show One is filled with anticipation, fear and excitement. It’s like an opening night eight times a week; the energy in the theater is palpable. It is those same feelings that happen every show thereafter – and you and I are going through it together. The change of dates will not take any of that away. What it will do, however, is help to ensure that The Music Man audiences, and our company, are in a completely safe environment. Can’t wait for that day!”

Producer Scott Rudin added, “We’re obviously profoundly disappointed to be unable to start rehearsals for The Music Man as scheduled. But safety is safety, and it has to take precedence over every other consideration — for both our audience and for our company. Despite the postponement, we are sticking together as a company, and we are grateful to be able to do so. And so we look forward arriving at The Winter Garden — with a beautiful, heartening Music Man in tow — at the beginning of April, and to being just one part of what we expect will once again be a vibrant and exciting Broadway.”

One of the most universally cherished treasures of the American musical theater, The Music Man was an instant smash hit when it premiered on Broadway on December 19, 1957. It went on to win five Tony Awards, including the prize for Best Musical and ran for 1,375 performances. The original cast album held the number one position on the Billboard charts and stayed on the album charts for 245 weeks. The recording won the first-ever Grammy Award for Best Original Cast Album. The Smithsonian Institution ranks The Music Man as one of the “great glories of American popular culture.”

Ticketholders who made their purchase via Telecharge.com or Broadway.com will be contacted automatically with directions for exchanges. Customers who bought in person at the Box Office or through any other outlet should contact Telecharge Customer Services.