Top Posts
Stephen McKinley Henderson Gives the Performance of His...
The McKittrick Hotel Announces the Return of ‘The...
Broadway Stars Honored with Academy Award Nominations
Taylor Trensch, Danny Wolohan, and More Join the...
A Gay Road Trip Comes to The Brick...
Maude Apatow of ‘Euphoria’ is the Next Audrey...
Tony Award Winners to Star in ‘Hercules’ at...
‘New York, New York’ Finds its Two Leads
Full Casting Announced for Oscar Isaac-Led ‘The Sign...
Disco Pop Musical ‘Here Lives Love’ to Bow...
Home Beyond Broadway In ‘The Perplexed,’ the Rich are the Only Ones Laughing
Beyond BroadwayReviews 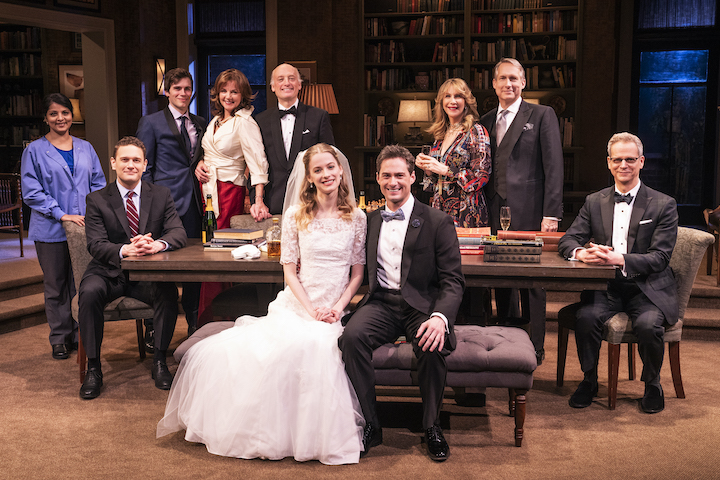 The cast of ‘The Perplexed’ at Manhattan Theatre Club. (Photo: Matthew Murphy)

The one thing that playwright Richard Greenberg nailed in his new play, The Perplexed, is the title. The rest is up for debate.

If you’re looking for two hours of whining from the one percent, you’ll feel right at home in scenic designer’s Santo Loquasto’s gorgeous Fifth Avenue library. It’s the kind of indulgence plucked out of a Noël Coward comedy. The striking details are almost enough to distract your wandering mind from the longstanding feuding families that drive Greenberg’s plot.

New York’s elite have gathered for the marriage of Caleb (JD Taylor) and Isabelle (Tess Frazer). Their parents have long feuded, spurned by the never-seen patriarch Berland Stahl and a past infidelity that emerges long after anyone beyond the fourth wall might care. Side plots ripple throughout the evening. Isabelle’s brother, Micah (Zane Pais), reveals that he’s been moonlighting as a fetish gay porn star; Cyrus (Eric William Morris), her childhood friend and former rabbi, discovers that he may still have feelings for the bride; James (Patrick Breen), Isabelle’s uncle, lurks in the background, browsing through books off of the plentiful shelves and keeping the abundance of furniture warm.

Greenberg’s 35-year body of work has often revolved around those who have versus those who have not but typically taps into a cultural zeitgeist. Eastern Standard (1988) intimately portrayed the emerging impact of the AIDS crisis; Take Me Out (which won the 2003 Tony Award for Best Play and is being revived on Broadway this spring) tackled homophobia and racism in professional sports. But The Perplexed’s excruciatingly unlikeable characters make it a squeamish endeavor.

Caleb’s mother, Natalie (Ilana Levine) needles mother-of-the-bride Evy (Margaret Colin) about her upcoming run for city council, saying, “What with all the gays and lesbians and people of color to choose from. There was a time when it would have been enough if you were a woman — if you were a Jew!”

Of course, Evy’s no angel, later bemoaning to her brother about what she refers to as “Pronoungate,” saying, “One day I’m going to get a bunch of those pronoun fascists into a room and ask them to identify an adverb.”

Later, James emerges from his reading chair for a painfully awkward conversation with Berland’s Guyanese nurse Patricia (Anna Itty), whom he mistakenly refers to as Muslim and then admits that he’d “be more at ease” if she hated being in this country for all the hardships she’s suffered.

For an 11 o’clock number, Greenberg places Patricia in the middle of a family conflict after she threatens to report Isabelle’s father (Frank Wood) for attacking Berland during the pre-wedding reception. Caleb conveniently edits the cell phone footage that he captured during the altercation and convinces the one person of color in the room that what she saw wasn’t true.

Unlikeable characters can make for great drama: Sergeant Vernon C. Waters in A Soldier’s Play or Roy Cohn in Angels in America — but when an entire cast (even the innocuous Isabelle has no sense of purpose for a 21st-century woman with a life of opportunity ahead) simmers and stews in its own entitlement, it’s not funny, it’s offensive.

Greenberg references writer Anand Giridharadas’ words, questioning, “Is there space among the woke for the still-waking?” Yes, but you won’t find them in this Fifth Avenue library.