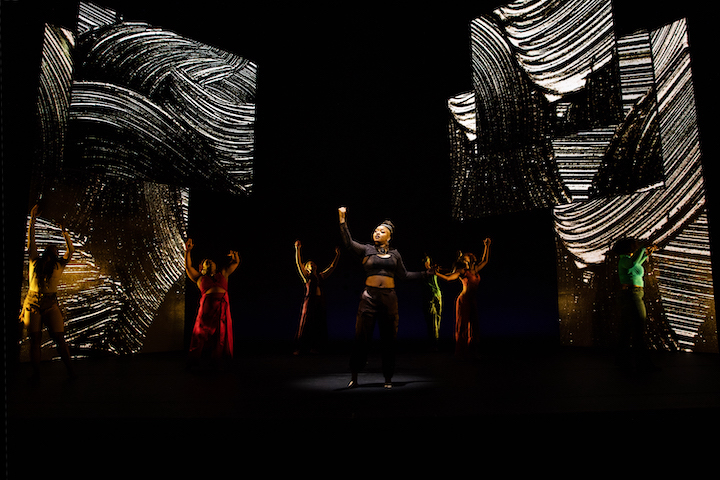 The glittering arc of Black women’s experiences comes to life as Ntozake Shange’s for colored girls who have considered suicide/ when the rainbow is enuf, a series of poetic monologues accompanied by dance and music, arrives at Broadway’s Booth Theatre.

A recent matinee performance also brought several of the understudies to the stage, including Alexis Sims as The Lady in Green, McKenzie Frye as The Lady in Orange, and Treshelle Edmond as The Lady in Purple. It felt nice to see these actors get their due turn treading the Broadway boards. It was equally heartening that the cast included a Deaf actor both using ASL and talking, with the hearing actors periodically signing along with her.

The 90-minute, intermission-free play begins with a joyful dance as the Ladies enter the stage one by one. The Lady in Brown speaks “dark phrases” of struggle and hard times balanced with “the song of her possibilities.”

Each Lady hails from a different city, and each has a story that balances the joy they find through sing-song rhythms and dances with the pain that lies in wait for them around every corner. The Lady in Yellow tells excitedly of losing her virginity on graduation night in the back seat of a Buick, exclaiming, “We waz finally grown!”

The Lady in Blue isn’t for all that grinding in dark corners. She lights up the South Bronx dancing “mamba, bomba, merengue” to the sounds of Willie Colón, saying, “If Jesus cdnt play a horn like shepp/ waznt no need for colored folks to bear no cross at all.”

The Lady in Red is tired of loving so assiduously, leaving packages, poems, and cards, and being stood up then called at 3 AM for a long-distance pickup. She ends her experiment on selfish love by concluding that she cannot stand not being wanted and leaves.

The joy cedes to the pain of male friends revealed as “latent rapists” and a woman’s inability to press charges if “you’ve been seen in public wit him/ danced one dance/ kissed him good-bye lightly/ wit closed mouth.” The betrayal of men you know cuts deep. Shange’s wrenching “abortion cycle” poems follow.

Sechita, The Lady in Purple, tells of quadroon balls in St. Louis, and The Lady in Brown recalls running away at the age of eight to find her hero, Toussaint L’Ouverture. The Lady in Red takes men to her bed, then pushes them back into the night. The Lady in Blue bemoans that her whole world is being condensed into six Harlem blocks of “bad smells/ kissing ladies smilin & dirt/ sidewalks spitting/ men cursing/ playin.” And The Lady in Green breaks down in “a night with beau willie brown,” the tale of poor Crystal who longs to give her two children a real father, until the crazy and crack kick in, and Willie drops his kids out a fifth-floor window.

As much as the world disappoints these women, so do they cleave to each other and affirm themselves; as The Lady in Red says near the end of the play, “I found god in myself/ & I loved her/ I loved her fiercely.”

This unabashed cycle of truth-telling could certainly justify how this world makes Black women mean just so they can survive. But instead, the show ends with a “layin’ on of hands” and a sisterhood that somehow allows for the victory of joy over pain. Shange’s cycle of poetic monologues finds a way to put a rainbow of vibrant color back in what can often be a very bleak world.

For colored girls who have considered suicide/when the rainbow is enuf
The Booth Theatre
222 West 45th Street, New York, New York
Through August 14