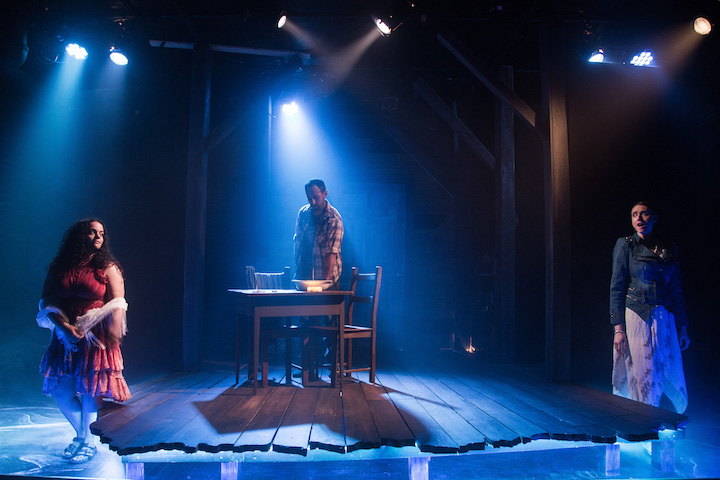 Dating seems to be universally hard and is well-traversed territory in literature, film, TV, and theater. And despite this play being about fishing, ostensibly, it was dating and relationships I was left thinking about after seeing BoHo Theatre’s production of The River at The Greenhouse Theater Center.

Tony Award-winning playwright Jez Butterworth sets the play in a remote fishing cabin somewhere in rural England, where The Man (Joe Lino) has brought his girlfriend, The Woman (Christina Gorman), to participate in a yearly family tradition of fishing ocean trout on a perfect moonless night as they swim up the river. The Man waxes rhapsodic about the beauty of fly-fishing, the grace of the hunter, the prey, the dark of the water, the thrill of the hunt. The Woman is less enthralled at being asked to stand around in waders in the cold water all night. They have an early relationship kind of tiff and then head out together. When The Man returns, there is a different woman in the cabin. This Other Woman (Chelsee Carter) has wandered off down the river and caught a fish with the help of another fisherman.

And so it goes, with scenes repeating and referencing each other. The Woman and The Other Woman experience a similar trip with The Man. They cook fish, bicker about why fly fishing is or is not exciting, and talk about their past life experiences. The Man is the only constant. He is ensorcelled with fishing. He quotes the women, each in turn, from the writings of Aelian, a third-century writer, on the beauty of fishing and the death of the fish. He tells an impassioned story about the first fish he caught when he was a boy. The Woman talks about her uncommunicative father and how she lied to The Man about never having fished before. The Other Woman gets a little drunk and flirty.

But these trips are not all freshly caught fish dinners and afternoon delight. The Woman sees what seems to be a ghost of a woman on the riverbank, laughing at her. The Other Woman finds a drawing of a woman, in the same cabin, though The Man assures both women he has never brought another woman there before. There is an inexplicable, and never addressed moment where The Man grabs one of the women by the throat to silence her. 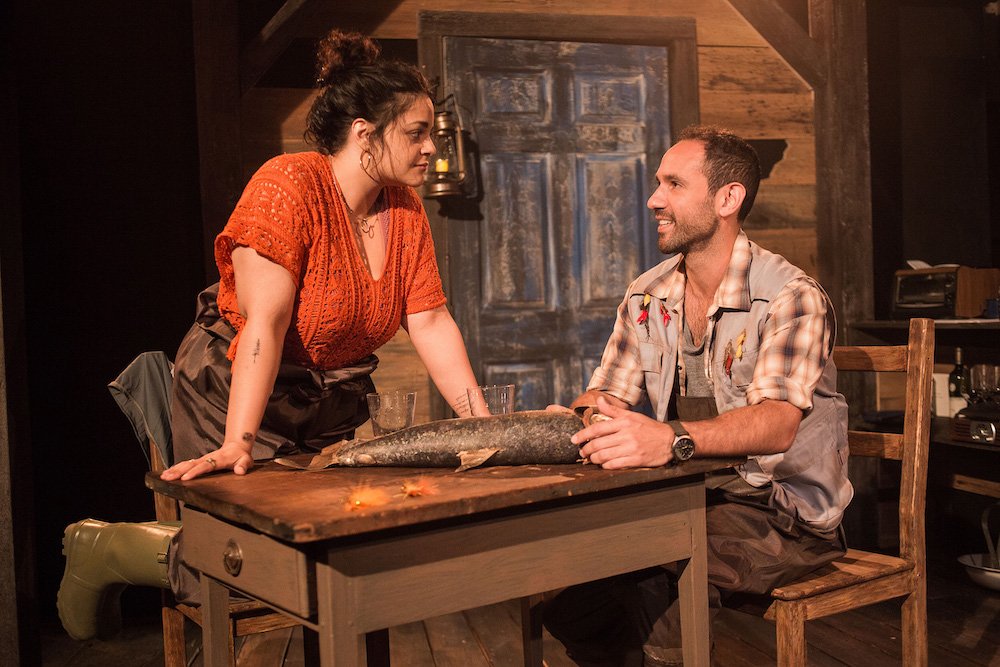 While there are moments of levity to lighten the drama and fish-focused monologues, I had one reoccurring question: How did this fishing-obsessed man lure not one, not two, but seemingly multiple women to his old, spider-filled cabin to talk at them about fishing? How come his beautiful, poetic language about trout and lures and childhood memories was not a red flag for these seemingly smart, capable women? Where did the dating process fail everyone here?

Though very little is resolved about The Man, the cabin, his love of fishing, and the women, The River manages to be creepy, haunted, and scary with very little actually happening. The skill of the actors adds life to what could have been a confusing piece of work about a man talking at women about what he loves. Carter, in particular, is vibrant and alive when on stage, stealing focus in all her scenes.

Is The River a theatrical catch? I guess it depends on what you expect to pull out of the water.