Top Posts
Stephen McKinley Henderson Gives the Performance of His...
The McKittrick Hotel Announces the Return of ‘The...
Broadway Stars Honored with Academy Award Nominations
Taylor Trensch, Danny Wolohan, and More Join the...
A Gay Road Trip Comes to The Brick...
Maude Apatow of ‘Euphoria’ is the Next Audrey...
Tony Award Winners to Star in ‘Hercules’ at...
‘New York, New York’ Finds its Two Leads
Full Casting Announced for Oscar Isaac-Led ‘The Sign...
Disco Pop Musical ‘Here Lives Love’ to Bow...
Home Beyond Broadway Being More Chilled at Lucas Hnath’s ‘The Thin Place’
Beyond BroadwayReviews 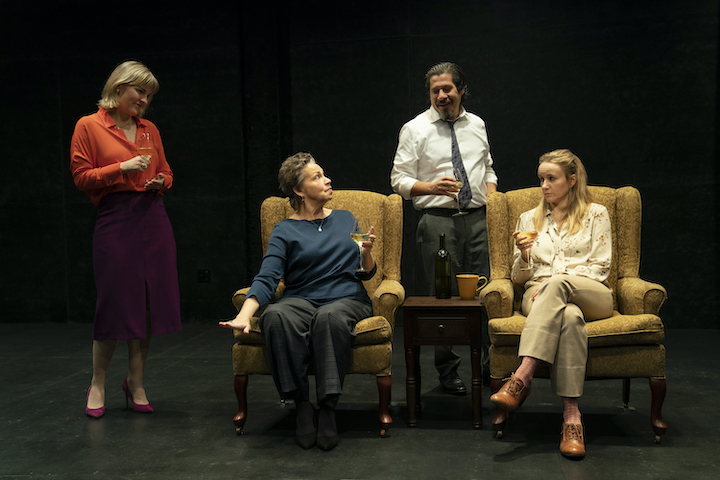 Being dressed for winter may not guarantee you won’t feel a shiver now and then as Lucas Hnath’s The Thin Place exercises its ectoplasmic enticements. Late in the play, after the space has been entirely blacked out, a tiny red light begins to glow, and . . . well, maybe it’s best to let you discover for yourself how Hnath’s chiller drops the temperature a degree or two.

Hnath (Hillary and Clinton, A Doll’s House 2) always has a surprise up his uncategorizable sleeve. The Tony Award-winning playwright was inspired to write this ghost story—which premiered at Louisville’s 2019 Humana Festival—while pondering how to dramatize a “horrifying incident” involving his mother. The seed was planted when the play’s eventual director, Les Waters, mentioned something called “the thin place.” This, he explained, is a sort of liminal space between one reality and another, “where the line between this world and some other world is very thin.”

The Thin Place, which, in a sense, is also that between the audience at Playwrights Horizons’ Peter Jay Sharp Theater and the actors on the bare, black-bricked stage, uses only two armchairs and a small table. (Mimi Lien did the scenery-less design.) When it begins, Hilda (Emily Cass McDonnell), a blonde in her 30s, appears, sits in a chair and speaks calmly to us, stage and houselights up (Mark Barton did the lighting), even addressing particular spectators.

The innocent-seeming Hilda, who recently lost her mother (she’d “gone missing,” she says), relates how impressed she was by attending a “sitting” in which “a real professional psychic” named Linda (Randy Danson, Art and Leisure), conjured the spirits of dead people for the benefit of the bereaved. Fascinated, Hilda befriended the middle-aged Englishwoman, who eventually revealed the trickery in her work.

That, though, isn’t to deny the existence of a “thin place.” According to Hilda, remembering her childhood relationship with her grandmother: “Like it’s sort of like if you were to imagine an octopus / in an aquarium pressed up against glass, / . . . except that there’s no glass / and no octopus.”

Throughout the 90-minute play, we listen to Hilda and Linda, who do little more than sit and talk of Linda’s work and Hilda’s interest. At a postprandial gathering, we meet Linda’s wine-lubricated friends, Sylvia (Kelly McAndrew, Men on Boats), a fashionable younger woman of means who appears to be the borderline dowdy psychic’s lover, and Jerry (Triney Sandoval, Bernhardt/Hamlet), a cousin/advisor of Linda’s about whom we learn little but whose brash enthusiasm is tinged with something slightly sinister.

No substantial plot seems underway, just a series of moments that raise possibilities for further action, such as Sylvia’s arguing that Linda’s claim to be helping people by her services is doing the opposite, or the hint that Jerry may harbor inappropriate intentions regarding Hilda.

Jerry also introduces the Japanese tradition in which people spend the night sitting around lit candles, telling one ghost story after the other, blowing out a candle for each until they’re all extinguished. (He says this involves 50 stories, but the tradition, as its unmentioned name [hyaku monogatari] implies, is actually 100.)

He never gets to repeat his memory of the final, and scariest story, but Hilda, who up to now has been more reactive than proactive, shares a true one of her own, involving her late mother, in which Linda took part. It’s now that the venue goes completely dark for a few moments. Hilda’s story, emerging from the relatively normal, if slightly edgy conversations we’ve been listening to, is… well, let’s just say you may briefly wish you’d added another layer to your winter gear.

The Thin Place, despite a relatively plotless format and a few red herrings flopping about, is continually engrossing, thanks, in part, to Waters’ tonally adept direction. Credit as well its excellent cast. Both McAndrews and Sandoval (each, like McDonnell, was in the Louisville production) provide reality-based oddness, while Danson and McDonnell are magnetic.

Danson, despite an accent sounding more Caribbean than working-class British, gives Linda a grounded honesty, but she makes you wonder just how far that honesty goes. McDonnell, whose thin nasality is at first off-putting, assumes a quietly overwhelming power, particularly during her long monologue. Hers is a stirringly original presence.

The Thin Place has more than a ghost of a chance to haunt you after the lights come back up.