Top Posts
‘Company’ to Hit the Road on North American...
Meet the Full Cast of ‘Shucked,’ Coming to...
Full Cast for ‘Parade’ Announced
Stephen McKinley Henderson Gives the Performance of His...
The McKittrick Hotel Announces the Return of ‘The...
Broadway Stars Honored with Academy Award Nominations
Taylor Trensch, Danny Wolohan, and More Join the...
A Gay Road Trip Comes to The Brick...
Maude Apatow of ‘Euphoria’ is the Next Audrey...
Tony Award Winners to Star in ‘Hercules’ at...
Home Beyond Broadway A Spellbinding Take on Social Upheaval and Salvation: ‘The Total Bent’
Beyond BroadwayReviews 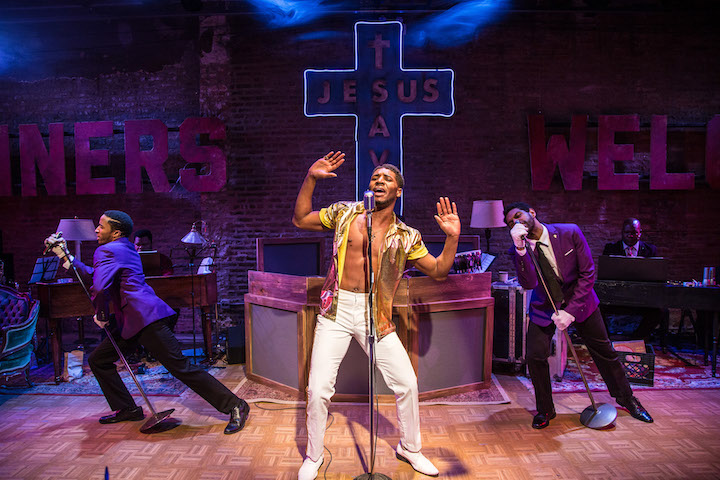 Chicagoans in search of the next great rock opera musical experience will find it in the Den Theatre’s Janet Bookspan room. The cozy space is currently home to the Midwest premiere of The Total Bent, a rollicking, meaningful and gratifying show brought to us by the creative team behind 2008’s Tony Award-winning musical for Best Book, Passing Strange.

The plot synopsis offered in the production’s press materials presents a more linear narrative than the one that plays out on stage, but it hardly matters. Many of the great rock operas have inexact story details. Think Tommy or Hedwig and the Angry Inch. It is the songs, rather than the dialogue, that move and take an enraptured audience with them. 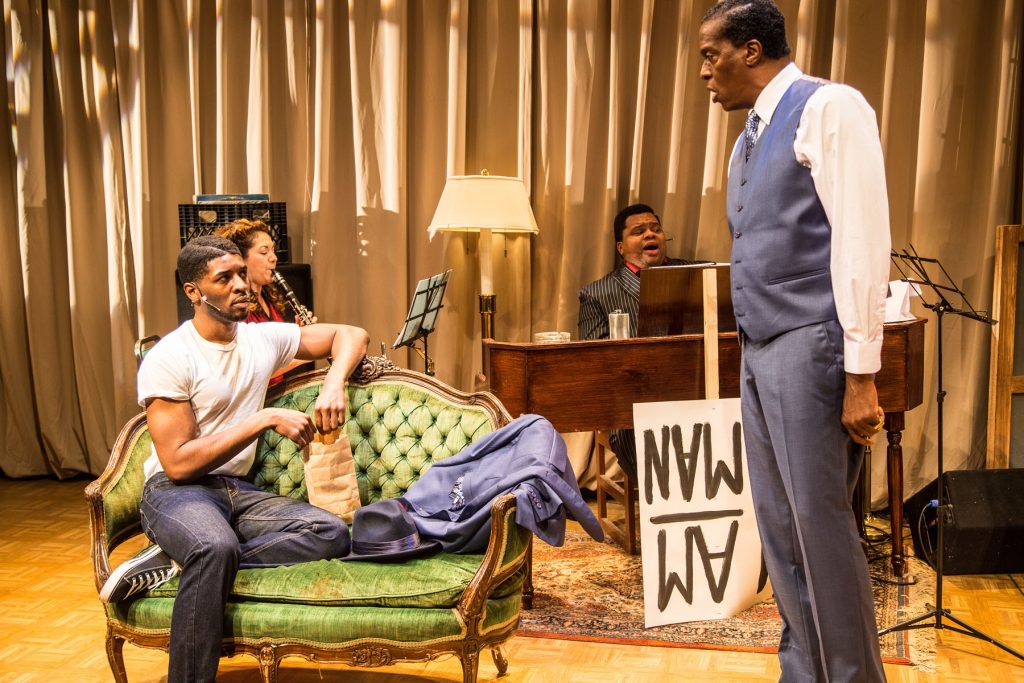 The action loosely centers on a British record producer who arrives in Montgomery, Alabama and discovers Marty Roy, a young black musical prodigy. Music and lyrics from Stew and Heidi Rodewald take that basic premise and turn it into a work of art packed with an exploration of so many social issues.

Some of these themes are timeless, such as the tensions between father and son, and the experience of growing up black and gay in a red state, as Marty does. That said, the action takes place in 1960s Alabama, and so the Civil Rights Movement is a de facto character, shaping the musical present and futures of Marty and his gospel star father, Joe. At varying intervals, both characters are slapped with “Uncle Tom” labels by their community, in direct correlation with the growth of their financial prospects. Then as now, racial tensions and economics are interconnected.

Although the story is ostensibly Marty’s (and other idealistic, disillusioned, queer black men of the era for whom Marty speaks), it is Joe Roy’s voice we hear first. Given life by actor and Poi Dog Pondering band member Robert Cornelius, what a voice is it. The show opens with Joe’s barn burning, blues gospel number “That’s Why…” which is an instant classic.

In case you’re wondering what comes after the ellipses, the full chorus of the song is “That’s Why…He’s Jesus and You’re Not, Whitey.” The amazing soundtrack bursts with rich tunes that break the mold of traditional spirituals. They are infused with anger, pain, irreverence, passion, truth and hope. Irrespective of one’s relationship with the Holy Ghost, audience members will be summoned from their chairs and moved to their feet.

Mr. Cornelius is positively spellbinding, nearly as gripping in short bursts of spoken word as he is in song. In more ways than one, he brings the perfected gifts of a musical elder statesman to the Janet Bookspan Theatre. However, the show wouldn’t work if Gilbert Domally, who plays Joe’s rebellious son Marty, did not portray equal brilliance. Channeling the ghosts of Prince, James Brown and other masters of sexy funk, Domally leaves his audience hot and bothered. And we’re not talking about the room temperature, which rises with every pulsating, soulful musical performance.

Unfortunately, the shifty Brit record producer (Eric Lindahl) offers a lamentable cornerstone for Marty’s eventual success and Joe’s musical redemption and becomes a throwaway character. Written with a lack of necessity at several key points of the story and anemically played by Mr. Lindahl, the wandering dialect and equally off-pitch vocals are no match for the high-impact, nuanced stylings of Mr. Cornelius and Mr. Domally. The performance is a minor distraction from an otherwise rich and conflicted celebration of blackness.

This Midwest premiere of The Total Bent represents an important collaboration between Chicago’s Haven Theatre and About Face Theatre. The partnership allows the two storefront companies to pool the necessary resources and talent to produce works such as this and everyone wins.  The result? The Total Bent triumphs. 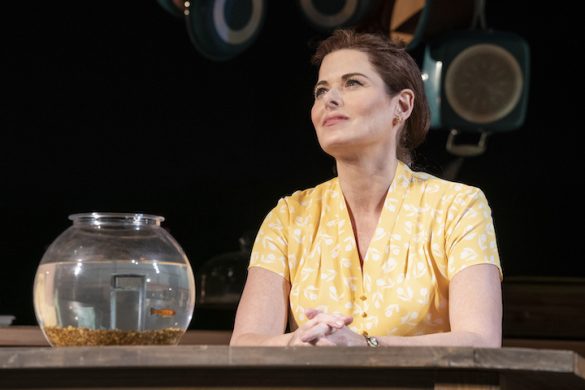