Top Posts
‘Company’ to Hit the Road on North American...
Meet the Full Cast of ‘Shucked,’ Coming to...
Full Cast for ‘Parade’ Announced
Stephen McKinley Henderson Gives the Performance of His...
The McKittrick Hotel Announces the Return of ‘The...
Broadway Stars Honored with Academy Award Nominations
Taylor Trensch, Danny Wolohan, and More Join the...
A Gay Road Trip Comes to The Brick...
Maude Apatow of ‘Euphoria’ is the Next Audrey...
Tony Award Winners to Star in ‘Hercules’ at...
Home Theater Buff Theater Buff: Max Jenkins from ‘Which Way to the Stage’
Theater Buff 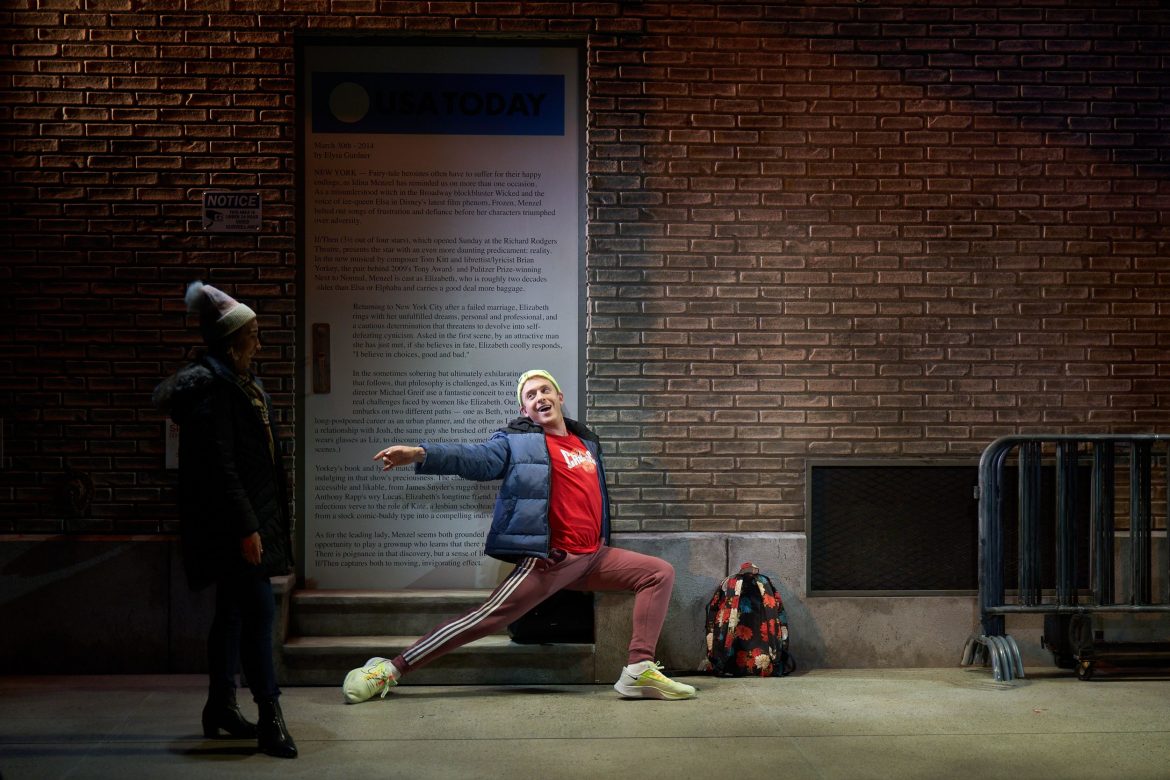 Max Jenkins in “Which Way to the Stage” (Photo: Daniel J. Vasquez)

Even as Tony Award season kicks into high gear, some of the hottest theater in New York is happening Off-Broadway. Ana Nogueira’s darkly comic play Which Way to the Stage, now at MCC Theater through June 5, has been hailed by critics as “the best new comedy since theaters reopened,” and “a love letter to theater people.”

Set in 2015, the searing and hilarious new work follows best friends and struggling actors Judy and Jeff, as they lurk outside the If/Then stage door hoping for a glimpse at Idina Menzel. The duo are hilariously inhabited by Sas Goldberg (Significant Other) and a quick-witted, sharp-tongued Max Jenkins.

The Broadway Blog spoke to Jenkins (Special, The Mysteries of Laura) about Nogueira’s play, his own relationship with stage door-ing, performing a drag tribute to Idina Menzel, and much more!

How did you first get involved with Which Way to the Stage?

I went to camp with the playwright Ana Nogueira at French Woods Festival for the Performing Arts in Hancock, New York. She made a splash as Lola in Damn Yankees and I’ve idolized her ever since. She sent me this play, and it was immediately a killer read.

I got to do one of its first readings at South Coast Repertory with Sas [Goldberg], who came out to California. You don’t want to see Sas in California, it doesn’t make any sense. She can’t drive, she was walking along the highway to go to Yogourtland, it was pathetic to witness.

What is your own relationship with stage door-ing, whether as a fan or as an actor?

As a native New Yorker I have the unfortunate affliction of always feeling too cool for stage door. I saw the original cast of Wicked, and my friend Jill’s mom screamed Idina’s name as we were walking by the stage door. I was so horrified I ran five blocks. I couldn’t be there, I couldn’t be part of that. 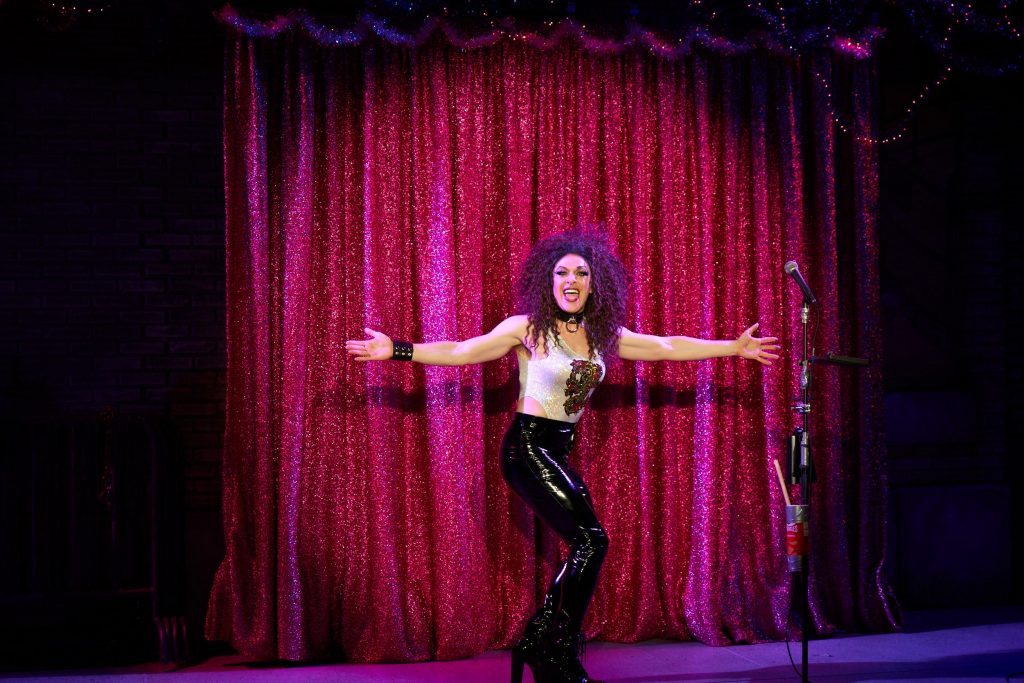 Max Jenkins in “Which Way to the Stage” (Photo: Daniel J. Vasquez)

In the play, your character Jeff performs a sharp-edged drag tribute to Idina. Did you have experience in drag performance to draw upon?

It was incredibly daunting. I don’t possess any amount of grace or femininity–well no, of course I have femininity in me, but not in the way that I would like! Not in the beautiful, physical ways that I could draw upon in my performance work.

The play also confronts the sexism, homophobia and other toxicity which actors face in the audition room–and which we can inflict upon one another. Has it helped you work through any judgments or insecurities in that area?

I learned early on in my career that all the things I was most humiliated by about myself are somehow the things that get me roles. All the things that when you’re a teenager you are embarrassed of about yourself, you gradually start to realize that they are quite fabulous.

The character of Jeff is so unapologetic that I have no choice but to embody that. Not only on a character level, but in the way that I engage with the audience. Because Jeff has a few moments where he boldly declares who he is, and he doesn’t always get pure love in response–but he doesn’t give a shit what the response is. So as a people-pleaser myself, I’ve learned a lot from embodying that side of Jeff.

Let’s finish up with a few rapid-fire questions. What’s your favorite spot for a post-show drink, and what’s your usual order?

Ardesia [Wine Bar], and I’m fond of their Lillet Spritz.

If you weren’t a performer, what might you be instead?

Tell us one thing about your workout routine.

Working out in capitalism is such a gyp. I would recommend sit-ups, push-ups, squats. It all comes back to that. Pick up something heavy–and put it all on your ass, otherwise you’ll injure yourself.

If you could live anywhere else besides New York City, where would it be?

I just did live in Los Angeles for four years, and I’m pretty sure I could do it again. If some friends from New York came with me. If Sas came out and I taught her how to drive in a parking lot.

That could be you two’s next play.

How I Learned to Drive – Part Two: No Paedophilia Here!