Top Posts
Stephen McKinley Henderson Gives the Performance of His...
The McKittrick Hotel Announces the Return of ‘The...
Broadway Stars Honored with Academy Award Nominations
Taylor Trensch, Danny Wolohan, and More Join the...
A Gay Road Trip Comes to The Brick...
Maude Apatow of ‘Euphoria’ is the Next Audrey...
Tony Award Winners to Star in ‘Hercules’ at...
‘New York, New York’ Finds its Two Leads
Full Casting Announced for Oscar Isaac-Led ‘The Sign...
Disco Pop Musical ‘Here Lives Love’ to Bow...
Home Reviews ‘This American Wife’ Is an Obsession-Turned-Performance-Turned-Reality
Reviews 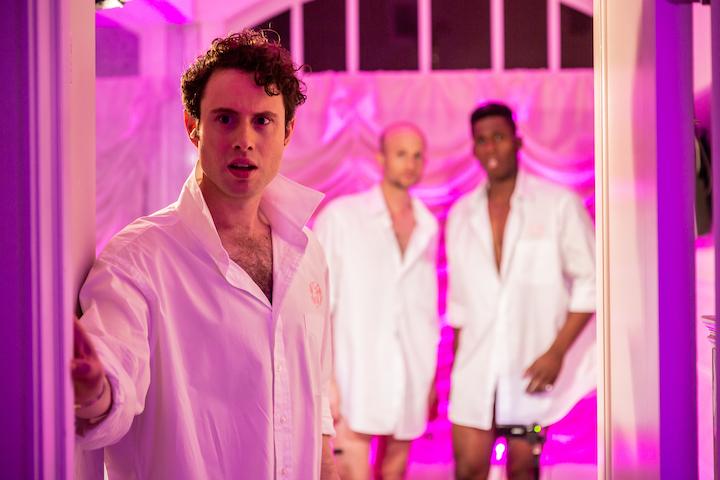 If a picture’s worth a thousand words, what’s the value of a GIF?

In 2021, a GIF can express the complexities of our emotions, galvanize fellow denizens of social media, and act as a succinct if not amusing reply to a work email. They have become a language unto themselves, one with its own structure, design, and beats. That is to say, they’re kind of like theater.

Fake Friends, the Brooklyn-based theater-media company that gifted us Circle Jerk earlier in the pandemic, starts their newest show This American Wife with a series of short clips, GIF-able moments from “The Real Housewives” franchise. Women pass out in manicured shrubs, trow champagne at tiki torches’ flames, and twerk in the middle of the street, giving the ever-hungry camera plenty to work with. Michael Breslin and Patrick Foley—founders of Fake Friends, This American Wife‘s creators, and two of the show’s three stars—understand the vulnerability and power of these women. They’re “Housewife” aficionados, though an encyclopedic knowledge of this sliver of the Bravo empire isn’t a pre-requisite to understand (and wildly enjoy) their show. In our age of living on a screen, we already know quite a lot about who we are when we’re on camera and who we are when we’re not. But as we spend more and more time inside a computer or camera’s lens, are those two beings not increasingly similar?

Inside a rented Long Island house, Foley, Breslin, and Jakeem Dante Powell (the third actor in the cast) flit in and out of rooms reenacting iconic moments from “The Real Housewives”—or what Breslin calls “contemporary American performance.” From Adrienne Maloof washing raw chicken with dish soap to Caroline Manzo telling Danielle Staub, “You’re a clown,” the three actors deftly move about the McMansion, complete with gaudy pillows and a fake topiary adorned with plastic lemons. Director Rory Pelsue blocks this sequence with smarts and aplomb as a camera follows them for an extended single take. It was so fun I almost forgot that live theater, too, is just one long, uninterrupted performance. 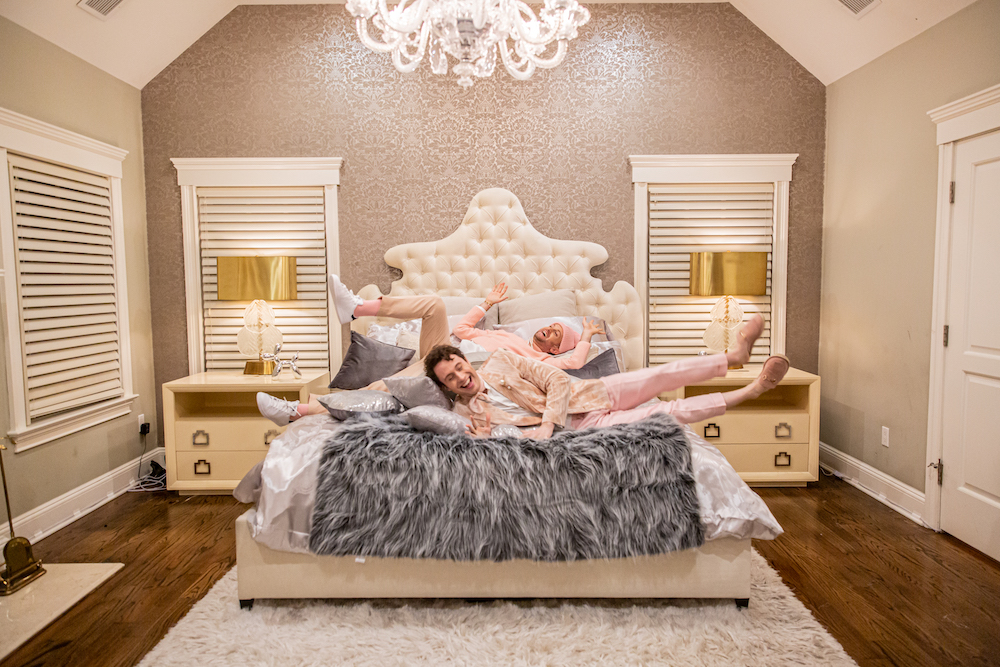 If all the “Real Housewives” references feel numbing, it only highlights the incessant gaze Bravo’s cameras cast on these women. But it’d be a mistake to think they are just ensnared victims; these shows have catapulted them to fame and jumpstarted their entrepreneurial brands and products—a small price to pay for constant surveillance.

Just as the three actors almost lose themselves in these women’s lives, Foley, Breslin, and Powell return, offering their own interiority—though not, at first, willingly. Each holds the camera over the other, asking increasingly personal questions. “Who’s watching this?” each asks. Despite their anxieties, all three open up, discussing class, body image, and sexual assault. Trauma makes for good TV, so there’s an intoxicating power to maintaining a camera’s stare.

In one of the show’s eerier moments, the three actors run through the house, now awash in fuchsia light. Each encounters the back of a woman, a figure who’s been lurking through the house, popping up as some phantom housewife, face always out of frame. After each actor finds her in a separate room, the woman turns around, and through innovative editing, reveals the actors in housewife drag, complete with a fabulous wigs, white coats, and bedazzled jewelry. Each seems to fail the mirror test, jarred by the self they see.

But then: inside the garage, after a door rises, in the verdant potential of a green screen and a bright camera’s light, Foley, Breslin, and Powell interrogate each other with questions sourced from Twitter and their own personal trove of secrets. Rumors, accusations, and blame follow. Their spat mirrors those seen on the TV shows Breslin, Foley, and Powell worship. It’s the most real we’ve seen them all night. Or was it also a performance?

This American Wife
Live through May 29, on-demand through June 6.