Sideshow Theatre Company’s world premiere production of Tilikum by Kristiana Rae Colon offers a bold preview on its website, a mostly-accurate teaser of what is to be expected at Victory Gardens Theater:

“Tilikum was a king, and the oceans of the world were his. Now, he is a king in captive in a marine amusement park, doomed to live as an opportunity for profit… Ripped from the headlines… Tilikum explores captivity, violence and rebellion in a vital and visceral blend of theatre, drumming and dance.”

It seems impossible to tell such an important story given the limitations of stage and human expression. How can you portray Sea World’s monetization of marine life, with connections to the horrors perpetrated by the Atlantic slave trade (in under 90 minutes) without alienating audiences?

It’s pleasing to report that in many ways, Tilikum is successful in its mission to connect nature, tribal ancestry, cynical capitalism and misguided humanity into a timeless, gorgeous and dystopic story of Us.

So much of this achievement is owing to the holistically phenomenal work of actor Gregory Geffrard as the titular orca whale struggling with confinement and a slowly encroaching forgetfulness. The dissociation from freedom and majesty that comes from long-term entrapment and lack of stimulation is heartbreakingly expressed in Geffrard’s poetic expression, comedic timing, fluid and pained movement. He is perfectly cast in a role that demands awareness of a shared history of land and sea. Sigrid Sutter, who inhabits Dawn, a poorly trained but well-meaning and eager lover of marine life, helps bring the story to life. We are with the young woman as she becomes progressively stuck between a rock of corporate power and the hard place of advocating for creatures she’s aware she could never engage in their natural habitat. In no spoiler for those who have followed headlines, the trainer pays for this curious paradox with her life. Sutter balances the role’s tension between corporate adherence and moral disquiet.

Tilikum’s only other companions inside the marine park are a trio of female whales, expressed via visual effects and drumbeats. The play must be experienced to fully understand its effectiveness. Musicians Coco Elysses, Melissa F. DuPrey, and Joyce Liza Rada Lindsey are remarkable at creating a sonic language that both seduces and eludes the segregated Tilikum. In the musicianship, we are at once comforted, yet more keenly aware of estrangement and the fear that can arise from its effects.

I found but one aspect of Rae Colon’s source material supremely disappointing. And that is the work’s bi-polar relationship with female empowerment. For example, Dawn is a tough if imperfect advocate drowned by indecision and male subjugation. At the same time, Tilikum’s orca lady neighbors are presented as fearful survivors by turn, morphing into an aquatic iteration of Macbeth’s witches by play’s end. Tilikum is ultimately stripped of his agency, left understood as the tool of white male imprisonment and female bewitchment. The awkward ending undermines an otherwise powerful emerging female voice in contemporary theater. 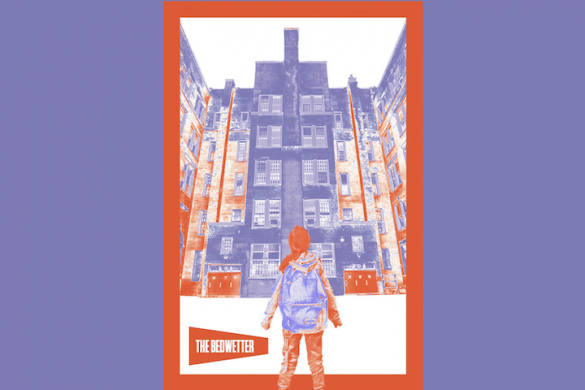