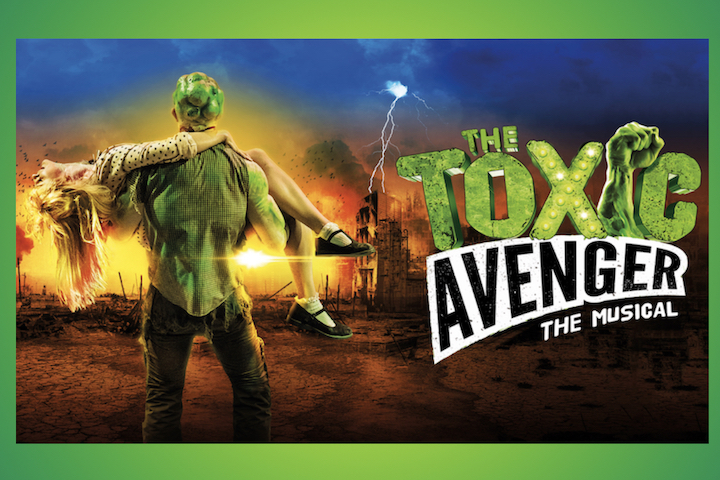 Life is radiant in Tromaville, but not in a manner that’s joyous. Dwarfed in the shadows by the “beautiful, conceited people of Manhattan,” the New York suburb provides the setting for The Toxic Avenger, The Musical.

“Who Will Save New Jersey?”  the opening song inquires. The answer: Melvin Ferd the Third (Ben Irish), an archetype geek who unearths the unscrupulous side of Mayor Babs Belgoody (Natalie Hope). Thanks to the town’s librarian, Sarah (Emma Salvo), Melvin is granted access to local records where he discovers that Belgoody has been accepting kickbacks to use Tromaville as a toxic waste dump. Without revealing too much of the campy plot, Ferd eventually morphs into a larger than life superhero with extraordinary strength who, of course, finds love in the library.

Joe DiPietro’s book, David Bryan’s score and the pair’s shared lyrics had a world premiere at the George Street Playhouse in New Jersey in 2008. John Rando (On The Town) directed, led by stage veteran Nancy Opel and Nick Cordero (A Bronx Tale, Waitress). In the spring of 2019, it transferred Off-Broadway to New World Stages, starring Opel and Cordero. Since then, the musical has been staged in venues around the globe and is a favorite pick for high school, college and regional theaters.

Broadway HD’s filmed version was produced at the Arts Theater in London’s West End, where it ran from October through December 2017. Although it lacks the comic precision so expertly executed by the New York cast, there is still much to enjoy.

At first blush, it may seem that DiPietro and Bryan are ridiculing the Garden State. After all, the opening number doesn’t exactly paint a picturesque view:

There’s a place between heaven and hell
Don’t need a map, just follow the smell
A place filled with filthy air
A place full of dark despair
A place you have no prayer
A place called New Jersey

In musical theater, however, it’s a safe bet that the underdog will conquer, and New York’s neighbor is no exception here. DiPietro and Bryan also have a gift for self-deprecation as they are both New Jersey natives with an ultimate appreciation for their home state. The duo, who were slated to open their new show Diana before the pandemic shuddered Broadway, has infused this superhero tale with a driving, crowd-pleasing rock score.

Tromaville won’t appear in an atlas, but for Lloyd Kaufman, it lives in his imagination. Kaufman, along with his business partner Michael Herz are the founders of Troma Entertainment, the longest-running independent film studio in North America. The two have made several low-budget films since 1974, many of which are set in the fictional town. One of their most well-known films, 1984’s The Toxic Avenger, provided the source material for the stage adaptation. The film company went on to produce two sequels. Arguably, this two-hour musical is more than enough time to devote to the franchise. Watch it through a lens of sheer entertainment, however, and you’ll be satisfied.

The Toxic Avenger
Available for streaming on BroadwayHD.
Like this? Consider another modern cult classic, Jerry Springer: The Opera.