Top Posts
Broadway Review: ‘Skeleton Crew’
‘B is for Broadway’ Feb 1 Release to...
Broadway Photographer Matthew Murphy Heads Underground to Help...
Keala Settle Heads to West End to Join...
‘The Kite Runner’ Heads to Broadway for Limited...
First Look at Audible’s ‘Long Day’s Journey Into...
Robert Cuccioli Stars in ‘A Touch of the...
Tim Rice Teases that ‘Chess’ May Come to...
‘Girl From the North Country’ Announces Closing, Sort...
NYC Broadway Week 2-For-1 Tickets Now on Sale
Home Beyond Broadway Paying the Price for a Higher Purpose: ‘The Trial of the Catonsville Nine’
Beyond BroadwayReviews 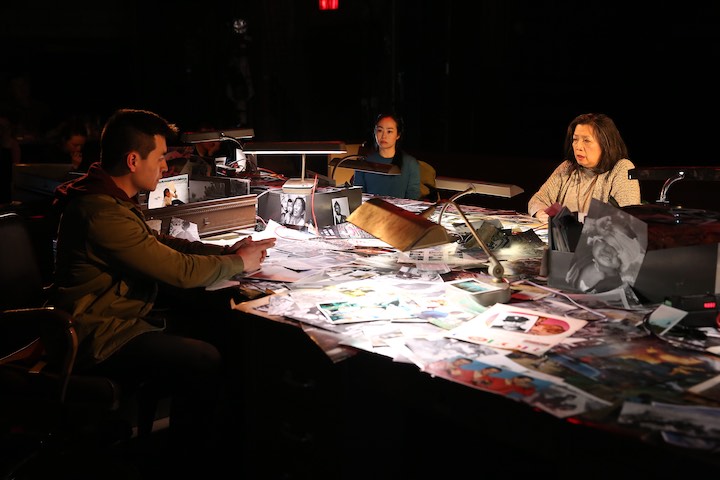 (l to r) David Huynh, Eunice Wong and Mia Katigbak in ‘The Trial of the Catonsville Nine.’
(Photo: Carol Rosegg)

Half a century ago, Jesuit priest, poet, and sociopolitical activist Daniel Berrigan wrote a docudrama (adapted by Saul Levitt) called The Trial of the Catonsville Nine. It was based on the trial that followed a radical act of anti-Vietnam War civil disobedience Berrigan, his brother, Phillip (also a priest), and seven others carried out, when,  three years earlier, they burned 378 draft records in Catonsville, Maryland. After its 1971 Los Angeles premiere, it moved to Off-Broadway before getting a brief Broadway run. Now in a riveting revival by the Transport Group, this is must-see theater for politically-inclined audiences.

The Trial… wrestles with much the same moral issue as another recent Off-Broadway revival, Robert Bolt’s A Man for All Seasons: in both, Catholic martyrs suffer the consequences of a conscience-driven stance toward the powers-that-be. Bolt’s Thomas More gives his life in protest against Henry VIII’s wish to subvert the Church’s opposition to divorce; Berrigan and his cohorts go to prison (they were incarcerated during the original production) for their efforts to stop the Vietnam War.

Unlike its first production, this one, superbly staged by Jack Cummings III, avoids a courtroom setting and straightforward Theatre of Fact style. Instead, it places nearly the entire production, audience included, on a proscenium stage reached by a side passageway reserved for theatre personnel.

On stage, you notice a large table on which hundreds of Vietnam War-related photographs have been (not so) casually dumped by designer Peiyi Wong (who also did the everyday costumes). Present as well are period ephemera, like LP albums, magazine covers, ads, and articles, file cabinet drawers, and goose-neck lamps with horizontal shades.

The audience of around 75 sits on wooden pew benches surrounding the table and is free to examine the memorabilia, much of it showing the physical suffering of the war. As the lights lower and the beating sound of rain and copter wings pounds overhead, three Asian-American actors (Mia Katigbak, David Huynh, and Eunice Wong) enter through the house and begin to slowly peruse the materials on the table, like visitors to an exhibit. This may be Cummings’ most radical innovation, as the original production had 13 actors, none of them Asian American.

Coming across the trial transcript, one begins to read from it. Soon, the others join in, not reading but reenacting the text as they sit by the table or move around it. What we witness is theatrically heightened but the result is very real, especially with the lines being spoken with rare clarity and power by each of these extraordinary actors, with some sequences delivered simultaneously for choral effect.

The use of only three, gender-crossing actors means that more than one may speak a specific character’s words, sometimes blurring the identity of the speaker. Such devices nevertheless help build the cumulative power of the testimony.

We hear the rationales for why the defendants acted (to stop the war and bring attention to its immorality and illegality), and we ponder the conflict between the urge to act out of conscience and the imperative to follow the law. Just what should be the punishment for acts of civil disobedience, regardless of their inherent morality? Should those who commit such deeds expect to pay a price or should they be exonerated for following a higher purpose?

Although its topical immediacy has faded, The Trial… remains a vital document reminding us of America’s continually aggressive foreign policy. Little has changed in how we supposedly serve our national interests via brutal militarism and violent cruelty.

Cummings’ staging is rhythmically controlled, the movement both realistic and tightly predetermined. Fan Zhang’s brilliant sound score includes a considerable dose of original and period music (wait for the irony implicit in the full version of “Look to the Rainbow” from Finian’s Rainbow). Aided by R. Lee Kennedy’s carefully calibrated dramatic lighting, tension enfolds us as we follow the engrossing discourse of witnesses and accused, attorneys and judge.

Cummings incorporates material from years afterward, allowing us to ruminate on the aftermath of what we’ve witnessed. There’s even a sort of postscript informing us of the ultimate fate of the Catonsville Nine.

An unforgettable mystical effect arrives at the end of the hour and 25-minute production: as the auditorium suddenly fills with smoke, we hear a hypnotic version of Buffalo Springfield’s iconic, protest song of the 60s, “For What It’s Worth,” with its unforgettable opening, “There’s something happening here.” At which point, the actors slowly melt into thin air.

Something’s happening on Grand Street and it deserves to be seen.

Additional material on the play’s background is available at Theatre’s Leiter Side. 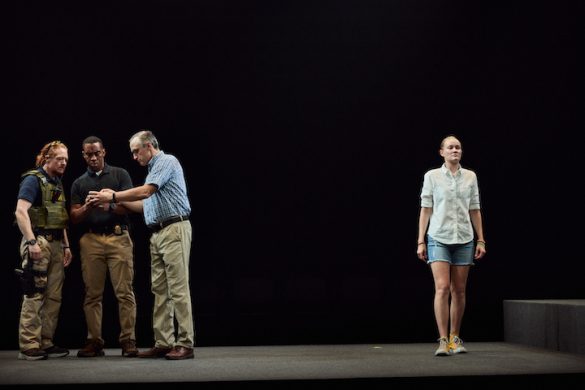