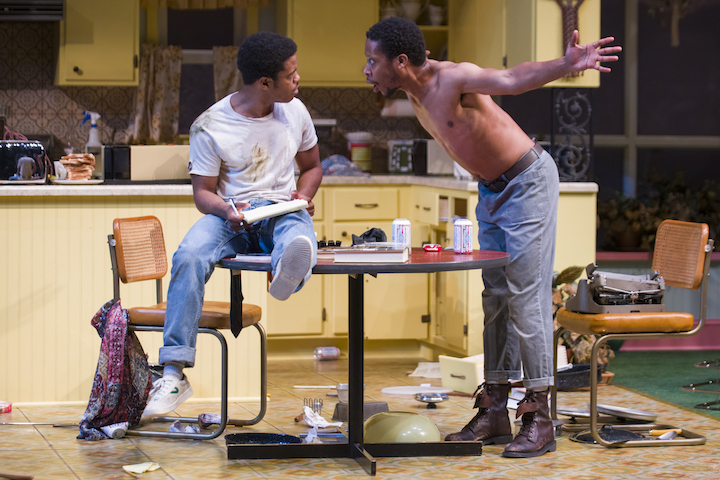 In Chicago’s theatrical history, much has been said of Steppenwolf Theatre Company‘s 1982 production of Sam Shepard’s True West, starring young Gary Sinise and John Malcovich. It was the play that launched Steppenwolf out of midwest obscurity and into the national spotlight, where it has stayed for nearly 40 years. The Chicago Tribune theater critic at the time, Richard Christiansen, described it as a “megaton explosion” and it has become the hallmark of what is known as “Chicago-style theater.”

True West, arguably Shepard’s most well-known and approachable play, is the story of brothers Lee (Namir Smallwood) and Austin (Jon Michael Hill). Austin, an over-educated Hollywood screenwriter, is hiding out in his mother’s suburban California house while she vacations, and trying to finish a script for a period piece. Lee shows up unannounced and encroaches on Austin’s privacy and working time.

The play, which has funny and darkly comic moments, gets an added layer of complexity when the race of the actors is added into the mix. Austin’s surprise at Lee’s skill at golf resonates differently, as well as the moment when Austin tells Lee he is going to stick out like a sore thumb, as he prowls the neighborhood looking for TVs to boost. Indeed, when seen through a lens of not just class but race, True West becomes a story about more than class, education, and opportunity.

Austin, dressed in an ugly cardigan and clean white sneakers clacks away on his typewriter while Lee slinks around drinking, fronting, and making a nuisance of himself. Lee is in the neighborhood to steal TVs and then head straight back to the desert where he’s been living. Austin is expecting a visit from a Hollywood producer, Saul (Francis Guinan) and would like Lee to be gone. When Saul and Lee meet, he is captivated by Lee’s easy storyteller’s charm, especially when compared to Austin’s uptight nervy energy. Competition, violence, drinking, and a lot of creative uses for a golf club spin out the brother’s life-long struggles. When Mom (Jacqueline Williams) gets home to find her house as trashed as her sons, there is a reckoning. 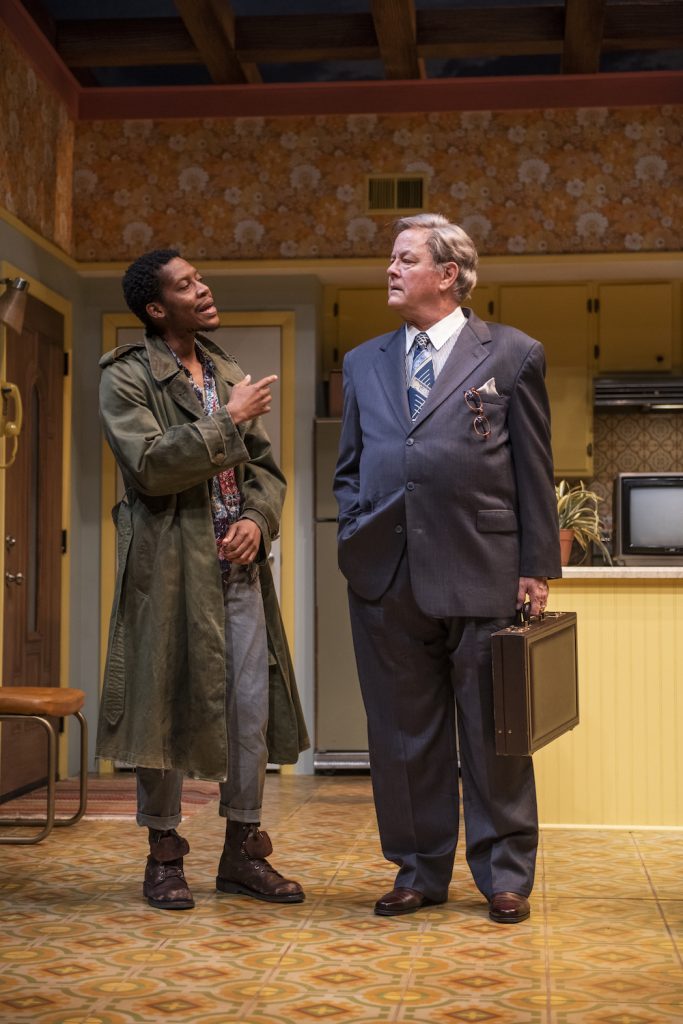 The always magical Guinan reprises his role from 37 years ago transforming Saul from a young up-and-comer to an older perhaps declining player looking for one more big hit; probably his last. The attitude of palpable menace mixed with jealousy and mayhem that Lee exudes can almost be seen sliding along the floor of the understated set as if someone turned on a fog machine. Austin is physically afraid of Lee, who towers over him bullying and shouting, but he still tries to be an encouraging brother. Their banter, jealousy, competition and simmering rage with one another are perfect and resonate with a Cain and Abel vibe. Shepard’s ear for dialogue keeps it fresh and real.

It is understandable why director Randall Arney went with a black cast for a play that has traditionally been cast white, as it was when Steppenwolf first mounted the production. It is a nod to their past and the changes that have been made in diversity, accessibility, and inclusivity of material and opportunities. This production of what Steppenwolf helped make a classic is more than up to the task of standing shoulder to shoulder with giants of the past.

True West hums with energy and life as did the original “megaton explosion.” This production shows a thoughtful, centered and intentional theater company that is deep with talent both new and mature. It showcases the best parts of the Steppenwolf tradition and makes great promises of things to come.