Top Posts
‘B is for Broadway’ Feb 1 Release to...
Broadway Photographer Matthew Murphy Heads Underground to Help...
Keala Settle Heads to West End to Join...
‘The Kite Runner’ Heads to Broadway for Limited...
First Look at Audible’s ‘Long Day’s Journey Into...
Robert Cuccioli Stars in ‘A Touch of the...
Tim Rice Teases that ‘Chess’ May Come to...
‘Girl From the North Country’ Announces Closing, Sort...
NYC Broadway Week 2-For-1 Tickets Now on Sale
Brittney Johnson Will Be First Black Glinda in...
Home Beyond Broadway Hunting for Humor: ‘Truffles: Music! Mushrooms! Murder!!!’
Beyond BroadwayReviews 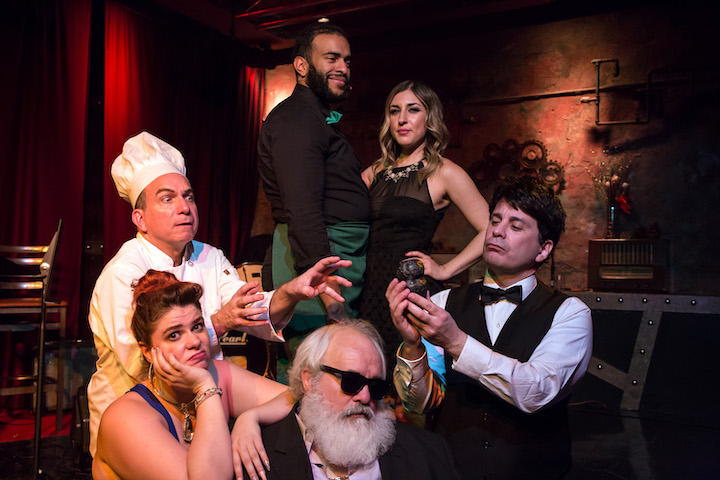 The cast of ‘Truffles.’ (Photo provided by JT Public Relations)

I wasn’t expecting King Lear. Truffles: Music! Mushrooms! Murder wants to be over-the-top, audience participatory, murder mystery dinner theater. Its peers are the bastions of mid-80s early 90s interactive frivolities like Tony n’ Tina’s Wedding, Shear Madness and Late Nite Catechism. The audience comes not to deeply feel or be changed forever, but to have ridiculous, laugh out loud silly fun. Sadly, this production fails to deliver on all fronts.

Billed as a dining experience as much as a theatrical one, and sponsored by Urbani Truffles, Truffles sets itself up for failure. As far as a piece of theater, even taking it in full context of its genre, Truffles does not connect. Instead of reveling in the corniness of their imagined situation and diving in with energy and winking silliness, family patriarch Dante Donati (John Guild), vacantly privileged chanteuse Isabella Donati (Lindsay Lavin) and the rest of the Donati clan are untethered.

Judging by their timid delivery and tendency to meander physically in their space, the cast is clearly unsure their jokes are funny. Sonia Carrion’s script is flat and without panache. Humor, even in its most over-the-top goofy way, has to have a grip on the human experience. We’ve all been to restaurants, many of us have worked in restaurants, there is a lot of real fodder for fun. Instead of tapping into the plethora of situational, tongue-in-cheek and even pun-worthy material that a restaurant setting offers, characters in Truffles run around in circles (literally) seeming to have never stepped foot in a restaurant much less own and operate one as the script would have us believe.

Like the script and production, the food has to be judged in the genre in which it sits: catered fare. No one with any understanding of the culinary world would expect this meal served en masse to be a life-changing dining experience. However, at $95 ($50 show ticket and $45 for dinner sans drinks), it is valid to expect well made albeit straightforward cuisine. Think again.

Clumpy truffle risotto almost stings with poor-quality truffle oil, decimated salmon served over inexplicably disintegrating lukewarm tomatoes and cucumbers are plated messily and without thought. Service was confused with multiple servers approaching tables to take orders, plates brought out and auctioned off at tables, etc. The “savory and decadent tasting platter” to start is a small salad plate with minuscule bites of grayish-brown morsels reeking of artificial and unbalanced truffle flavor.

Truffles: Music! Mushrooms! Murder!! could have been a couple hours respite from the harshness of the world. We could all use a moment to giggle at groan-worthy puns and gregarious characters while eating inviting dishes that remind us of the mom and pop Italian eateries of our childhoods. Instead, Truffles made us feel like we walked into something unrehearsed, unprepared and bland in every way.