Top Posts
‘Company’ to Hit the Road on North American...
Meet the Full Cast of ‘Shucked,’ Coming to...
Full Cast for ‘Parade’ Announced
Stephen McKinley Henderson Gives the Performance of His...
The McKittrick Hotel Announces the Return of ‘The...
Broadway Stars Honored with Academy Award Nominations
Taylor Trensch, Danny Wolohan, and More Join the...
A Gay Road Trip Comes to The Brick...
Maude Apatow of ‘Euphoria’ is the Next Audrey...
Tony Award Winners to Star in ‘Hercules’ at...
Home Beyond Broadway Urgent and Engaging, ‘Twice, Thrice, Frice…’ Examines the Female, Arab-American Experience
Beyond BroadwayReviews 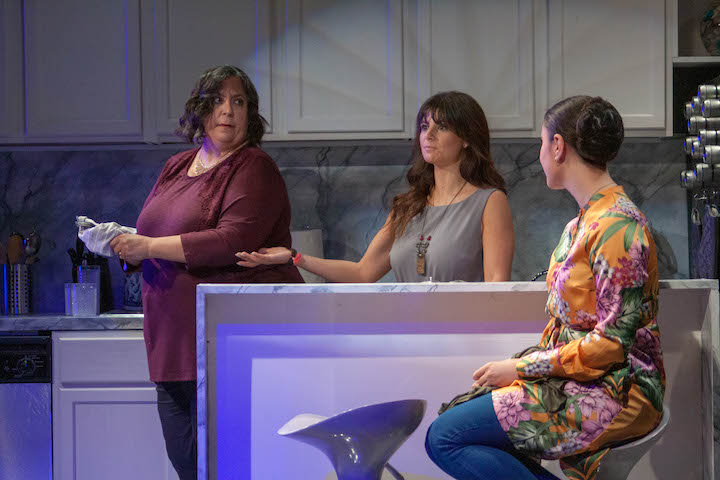 A joint production of Silk Road Rising theater company, and International Voices Project, Twice, Thrice, Frice… makes its world premiere onstage inside the historic Chicago Temple Building. The work, penned by playwright Fouad Teymour, offers a fresh, funny, tender feminist perspective on issues of the heart as old as time and agnostic of culture. Yet the story is specifically an Arab-American, female one. Thus, the Windy City’s bright slate of fall theater programming is burnished further by a self-evident case for diversity in storytelling.

Directed by Patrizia Acerra, Twice, Thrice, Frice… drops audiences in on the interconnected lives of three suburban Muslim women. Khadija (a terrific Annalise Raziq) is the mother hen/older sister figure to Amira (Catherine Dildilian), an artist and real estate professional, and Samara (Marielle Issa), a young 30-something balancing a career with an MBA program. Samara is also the daughter of Khadija’s deceased bosom friend, investing their relationship with what at first seems like a relatively harmless co-dependency.

Without giving away spoilers, the women’s somewhat predictable lives begin to quickly unravel. The play prophetically opens with an intense debate between the three on the subjects of adultery, polygamy, Sharia law and how all of these forces are shaped by American citizenship and culture. The discussion underpins the plot points to follow, as well as the dynamics between the women.

Amira—childless, happily married but somewhat lonely—initially serves as the rhetorical antagonist to her more culturally conservative friends, rejecting the notion that Muslim men are entitled to sensual gluttony by either gender or divine providence. Khadijah and Samara adopt more traditional positions that are taken apart and reconfigured as the story evolves. Over 100 intermissionless minutes, we learn that perhaps neither Khadijah nor Samara are quite as conventional as first presented. This is a tangled, complicated story of survival, betrayal and moral responsibility—written, directed and acted by talented women aware of their agency. 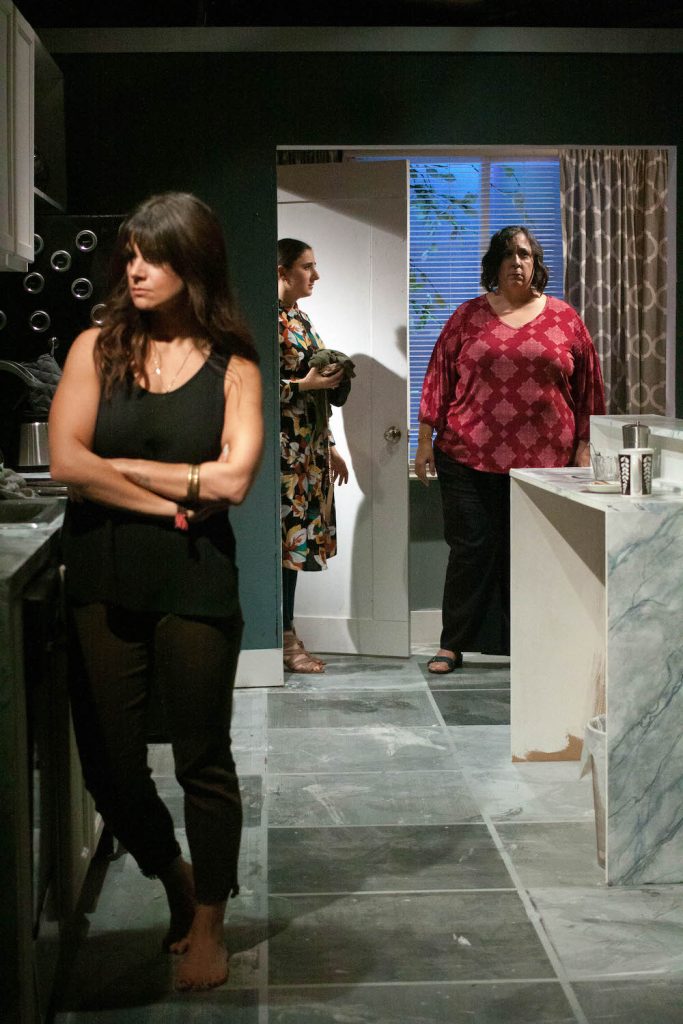 Ms. Raziq’s Khadija is both achingly sympathetic and a powerful force of wisdom and action with which to be reckoned. The eldest and least classroom-educated of the three characters, Ms. Razig’s comedic timing and gift for silent expression render her character a wise-cracking, street smart, but betrayed woman forced to wonder at the obvious limits of blind faith. Khadija experiences the most personal growth by the play’s end, and Ms. Raziq earns every bit of the audience’s credulity on that account. It’s the production’s anchoring performance.

Ms. Dildilian is more than her gorgeous hair and costume changes between expensive sets of loungewear, although just try to ignore either flourish. Her Amira brings an air of cosmopolitan glamour to a story about remaking convention with an outer glow and diminutive frame that belies her character’s steely, reflective intensity. Amira suffers no fools, particularly within her chosen American family. Ms. Dildilian’s palpable chemistry with Ms. Razig is one of the production’s pure delights.

Ms. Issa rounds out the cast as the ethically complicated Samara. The recent theater school graduate appears less sure of herself than her fellow actors, occasionally losing focus with a concentration that wafts into the audience, thereby fragmenting the world of the play.

As the end of 2019 rapidly approaches, I wish it weren’t still such a novelty to see engaging work staged for women, by women. Quality work like Twice, Thrice Frice…, which debuted to a packed house, should serve as a reminder that over half of the world’s population has a lot of interesting, urgent, universally appealing stories to tell.