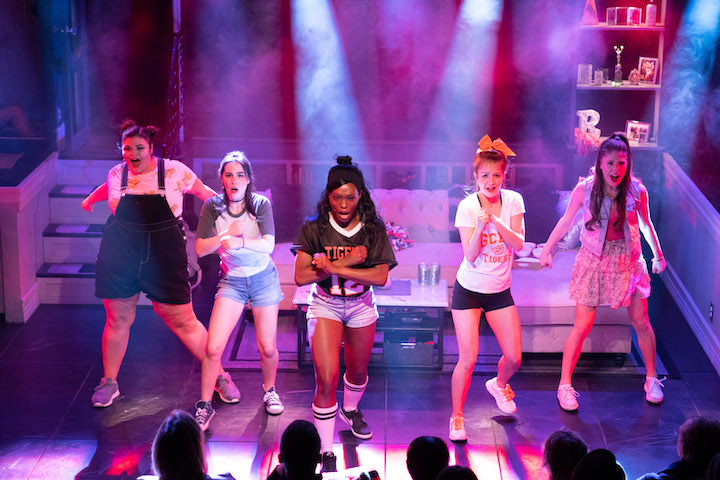 Is there anything more potentially vicious than a beautiful high school cheerleader? How about when said cheerleader will do anything to evade criminal charges? You don’t want to cross these girls in the Theatre 80 production of We Are The Tigers, a murderous new musical where an average cheerleading practice and sleepover turns into a felony.

With book, music, and lyrics by Preston Max Allen, We Are The Tigers sparkles and shines, and also offers a glimpse into the ugly inner turmoil tantamount in high school, especially among teenage girls. Yet the tropes applied to each character never go below the surface, denying them the ability to truly connect with each other and create a believable cheerleading team.

The pep is palpable from the onset: Riley, the captain, (an unwaveringly perky Lauren Zakrin, The Great Comet, Rock of Ages) gathers the girls at the start of the school year with the help of her co-captain (ish), Cairo (a striking Wonu Ogunfowora, Summer: The Donna Summer Musical, A Bronx Tale). Riley hopes to foster a competitive streak in the girls to redeem them from the embarrassment of the year before, which entails a shaky pyramid formation and a concussion. While this misstep earned them a viral YouTube video, Riley urges everyone to forgo their frustrations for the betterment of their cheerleading reputation.

‘We Are The Tigers’ (Photo: Mati Gelman)

This plot has been previously played out in Bring It On (both the movie and the musical) and Lysistrata Jones. Perhaps we would buy the cheerleading-as-an-end-goal if the rest of the girls believed in it as well, or if we saw a stronger consequence to their shortcomings from the previous year.

Instead, we’re dipped into a swirling pot of sulky, snarky, and vague teenage girldom: Kate (Jenny Rose Baker, Fiddler on the Roof) is angry with Chess (Celeste Rose); Annleigh (Kaitlyn Frank, Newsies, White Christmas) is frustrated with her sister Farrah (Zoe Jenson) for drinking too much; Reese (Mimi Scardulla) desperately wants to graduate from mascot duty to cheering; and Riley and Cairo come to head about who built up who. Oh, and the best flyer from a rival team, Eva (Sydney Parra) delivers a pizza, and later joins the Tigers. Typical high school japes.

While the ambiguous frustrations within the team dilute Allen’s book, the shiny veneer women will go to any lengths to uphold is clear and compelling. Each girl is riddled with unseen anxieties and insecurities, lamented through laced harmonies and wonting looks. Allen’s score is catchy, spotlighting individual dramas and how each cheerleader fits into their cache.

The damaging message that women often maintain pristine exteriors for the sake of societal constraints or social niceties comes through loud and clear. So, too, do we witness how these girls shame one another in regards to sex, drugs, and alcohol. No wonder they hate each other: every action is dissected and skewered.

And then the murders happen. With a spurt of blood and a scream, Tigers are slain by an unknown knife-wielding assailant. The girls quickly turn on one another to pin the crime before the culprit is eventually revealed, but not before they go through great sorrow, mourning their teammates and friends who have died for the sake of the Tigers.

We Are The Tigers is ripe with teenage tropes: slut shaming, manipulation, peer pressure — as well as a healthy dose of Gen Z and millennial jokes, but only a few are compelling enough to stick. We never get to see the squad bond or affirm one another: instead, they bristle and spat. And stab.