Top Posts
‘Company’ to Hit the Road on North American...
Meet the Full Cast of ‘Shucked,’ Coming to...
Full Cast for ‘Parade’ Announced
Stephen McKinley Henderson Gives the Performance of His...
The McKittrick Hotel Announces the Return of ‘The...
Broadway Stars Honored with Academy Award Nominations
Taylor Trensch, Danny Wolohan, and More Join the...
A Gay Road Trip Comes to The Brick...
Maude Apatow of ‘Euphoria’ is the Next Audrey...
Tony Award Winners to Star in ‘Hercules’ at...
Home Buzz We Love You Broadway, Part III
Buzz

For today’s picks of the best Broadway love songs, I turned to Duncan Stewart and Company, one of Broadway’s hottest up and coming casting agencies. Duncan Stewart and Benton Whitley have a keen eye for talent and are responsible for all of those unexpected star turns in the revival of Chicago. Other projects include the Tony award-winning revival of La Cage aux Folles and the much-anticipated revival of Pippin directed by Diane Paulus.

Duncan Stewart and Company was profiled in the June 2012 issue of Passport Magazine. Their meteoric rise on the New York theater scene is no surprise given their introspective takes on what makes for a great Broadway ballad. Here’s what they have to say…

“I love complicated love songs — ones that pull at the heartstrings and move me, yes, but the ones that really induce heartache are the songs that deal with both love and loss.”

“Goodbye Old Girl,” Damn Yankees
“This song has moved me since when I was young. A man loves his wife, yes, but he also needs to leave her to discover and re-awaken something in himself that has been missing for years. As his wife sleeps upstairs, he pens her a note, ‘Goodbye, old girl. My old girl. When you awaken I’ll be gone. Can’t tell you where I go, It isn’t fair, I know but trust in me and carry on.’

At the end of the song he sings, ‘Our love will keep old girl, till then, my old girl, goodbye.’ While in complete distress, Meg seems to understand that her husband has gone to find ‘himself’ and holds the torch for his ultimate return. I believe Meg and Joe are soul mates and that this kind of love is true, messy, complicated and unconditional… and in the biggest sense of the word, isn’t that what ‘love’ is all about?”

“How Could I Ever Know,” The Secret Garden
“A perfect example of love’s eternal flame. Archibald, in despair, cries out to the universe (and to the spirit of his deceased love, Lily) ‘How in the world, tell me how in the world, can I live without your love?’ Just as he is about to utter the word ‘gone’ she appears in a vision to calm him. Coming back from the grave to comfort the love of her life, Lily sings a most beautiful melody — that both lovingly soothes and reassures him: ‘How could I know I would never hold you? Never again in this world, but oh – sure as you breathe I am there inside you…”

“True love that lasts is not about cards, candy, flowers or heart-shaped boxes filled with chocolate. True love transcends struggles and strife, uplifting, beholding and celebrating both parties (as individuals and as a coupled unit) and yes, carrying on in eternity.”

Take the jump for Benton’s picks…
“These 4 Walls,” Gavin Creel
“This isn’t from a from a musical, but written and performed by Broadway actor Gavin Creel (currently starring in the London company of  Book of Mormon) on his solo album GoodTimeNation. Gavin’s song constantly reminds me that even in the darkest times we all have the ability to give and receive love from the people we care the most about.”

“All the Wasted Time,” Parade
“The people we love the most are often the ones we push away as we fear showing our true self’s and total vulnerability will not be embraced and loved fully in return. This song encapsulates that moment in a relationship when two people realize that their love is too strong to be thrown away over something so petty. Their love stands the test of time. Isn’t this what we are all searching for?!”

We Love You Broadway, Part IV 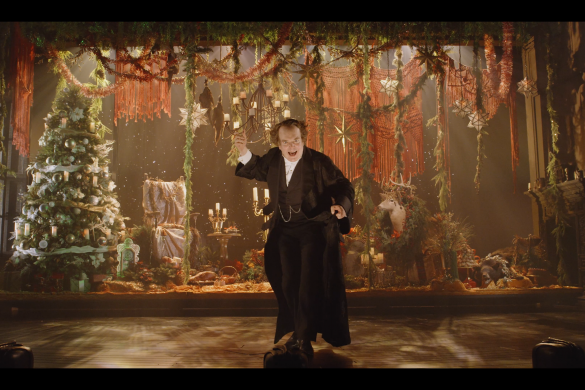