The theater community reunited in Times Square exactly one year to the day since Broadway shut-down for “We Will Be Back,” a special live pop-up experience and commemoration of Broadway’s “lost year.” The socially-distanced event aimed to provide a sense of hope as the industry and city move forward from the challenges brought on by the past year by shining a spotlight on the arts workers who suffered during the theatre’s darkest hours as well as celebrating the sense of community and diversity within the arts environment that mirrors that of New York City itself.

“We Will Be Back” included contributions from the variety of institutions and organizations that make Broadway what it is and are shaping the Broadway of tomorrow, including Broadway Inspirational Voices, Musicians United for Social Equality (MUSE), Judi Wilfore (leading front of house, ushers, company managers and concessions efforts), Be An Arts Hero, Black Theatre United, The Costume Industry Coalition, Broadway For Racial Justice, The Dramatists Guild, Black Theatre Coalition, Local 802, The Casting Society of America, The New York Drama Critics Circle, Open Jar Studios, Stars in the House, Dominick Costa (Merchant’s Hospitality), and RRR Creative. 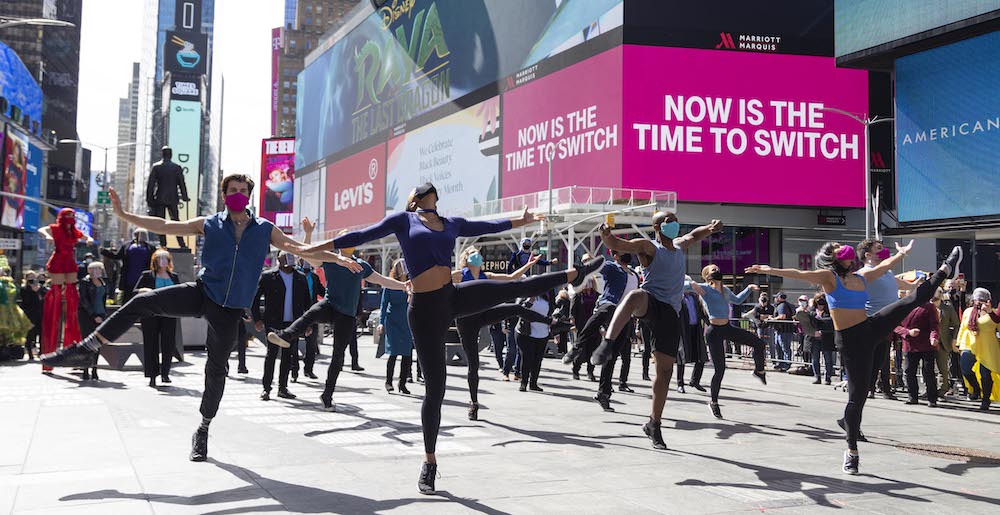 ‘We Will Be Back’ (Photo: Danny Perez)

Costumes from Ain’t Too Proud, Moulin Rouge! The Musical, Six, Phantom of the Opera, and Wicked displayed in and around the performers were built by members of the Costume Industry Coalition, representing 55 small businesses that make, supply and care for Broadway costumes.

The event organizers are collectively responsible for producing dozens of events all over the city during the pandemic, including pop-ups in the five boroughs and October’s Times Square Event featuring Bernadette Peters and 50 fellow artists singing on the red steps over TKTS in Times Square’s Father Duffy Square.

“Broadway Cares/Equity Fights AIDS takes great pride in standing with the Broadway community, which has stood beside us for so long,” says Executive Director Tom Viola. “These theater artists — all who work with such dedication onstage, backstage, and behind the scenes — are the first to respond with generosity, compassion, and action when crises hit others. We join everyone with a look to the future as we renew our longstanding commitment to do all that can be done to help ensure immediate, basic support for all those in the arts facing uncertainty in this unsettling pandemic and beyond.”