Top Posts
Ingrid Michaelson Rings in the Holidays for Two...
Review: ‘& Juliet’ Is A Daffy, Absurdly Joyous...
Jinkx Monsoon & BenDeLaCreme’s ‘The Jinkx & DeLa...
Review: Victoria Clark Shines in the Refreshingly Original...
Review: Mike Birbiglia Astounds in ‘The Old Man...
A Sondheim Stocking Stuffer: New Book Offers Insightful...
From ‘Tattooed Lady’ to ‘KPOP,’ Plus A Quick...
Museum of Broadway Will Open Its Doors November...
Previews Have Begun for One-Man ‘A Christmas Carol’...
Strong Performances Aren’t Enough to Save ‘Almost Famous’
Home Reviews Amending a Play’s Definition: ‘What the Constitution Means to Me’
Reviews 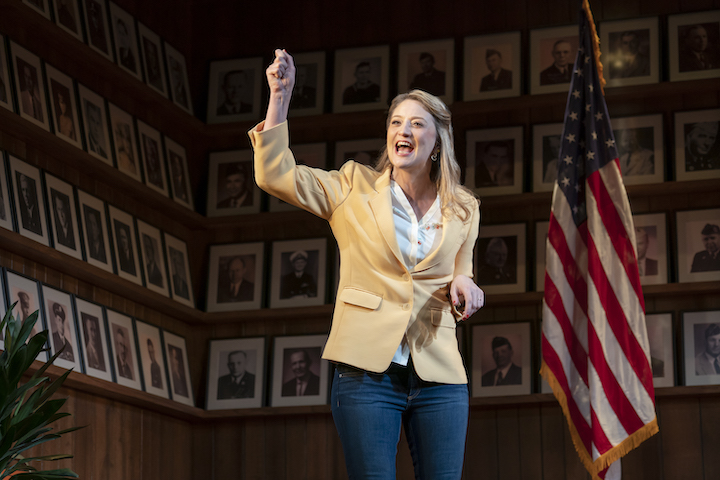 Heidi Schreck in ‘What the Constitution Means to Me.’ (Photo: Joan Marcus)

Heidi Schreck isn’t only expanding our definition of America’s seminal document; she’s also redefining what a play can be.

Especially a Broadway play. Sure, standup pieces or comedic experiences — Mike Birbiglia’s The New One, Nick Kroll and John Mulaney’s Oh, Hello — have been their own singular inventions, but Schreck’s What the Constitution Means to Me sparkles with something more timely and bold. It is a profoundly resonant, personal, and tragicomic exploration of a document that likely affects every person in the audience, treating some in the house better than others.

If you saw Schreck’s critically acclaimed work in any of its previous iterations (I saw it at the Greenwich House), it might be worth a revisit. Not just because the play (like our Constitution) is a breathing, evolving piece, but also because each relentless news cycle seems to add urgency to the play. Moving to a bigger house at the Helen Hayes, Constitution has lost neither its intimacy nor its immediacy. 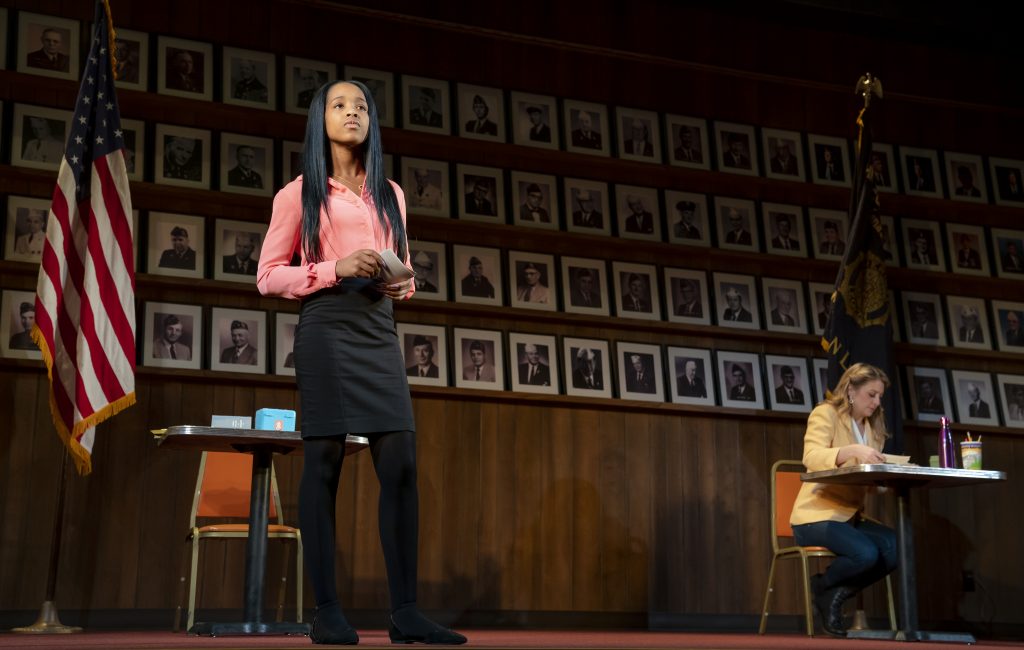 (l to r) Thursday Williams and Heidi Schreck in ‘What the Constitution Means to Me.’ (Photo: Joan Marcus)

For those not familiar, Schreck’s play outlines her upbringing and the legion hall debates about the Constitution (which she continually won) that would fund her college education and chart her political perspective. Evaluating this famed document’s lack of protection toward women and minority groups, Schreck explains — never didactically, always engagingly — how current political affairs are a reflection of age-old doctrines.

This includes personal anecdotes about the abuse her ancestors endured from the toxic men in their lives, along with historical examples like the 2005 Supreme Court case Gonzales vs. Castle Rock, where a mother sued a town’s police department for not taking action when she said her children’s lives were in danger. The mother’s husband killed her three children, but the Supreme Court ruled Castle Rock — in not heeding Ms. Gonzales’ calls — did not have a constitutional obligation to defend her.

Sound grim? It sometimes is, but Schreck imbues her script and performance with specificity and resounding humor. Director Oliver Butler’s pacing helps laughs land, as does a winningly stiff performance from Mike Iveson who plays a debate moderator.

Rounding out the cast is a high school student and debater who — in real time — spars with Schreck over whether the Constitution should be abolished (because of its lack of service toward vulnerable groups) or kept (because of its fluidity and potential for growth). At my performance, Thursday Williams gave Schreck a run for her money with her incisive wit and sharp remarks. (Rosdely Ciprian alternates the role.)

But who won the debate? That’s up to the audience. Schreck and Williams’ back and forth elicited one of the most uproarious responses I’ve seen in a Broadway house. Perhaps people are seeking a salve, or the chance to fight. Schreck’s play offers both.

What the Constitution Means to Me
The Helen Hayes Theatre
240 West 44th Street, NYC
Through July 20, 2019