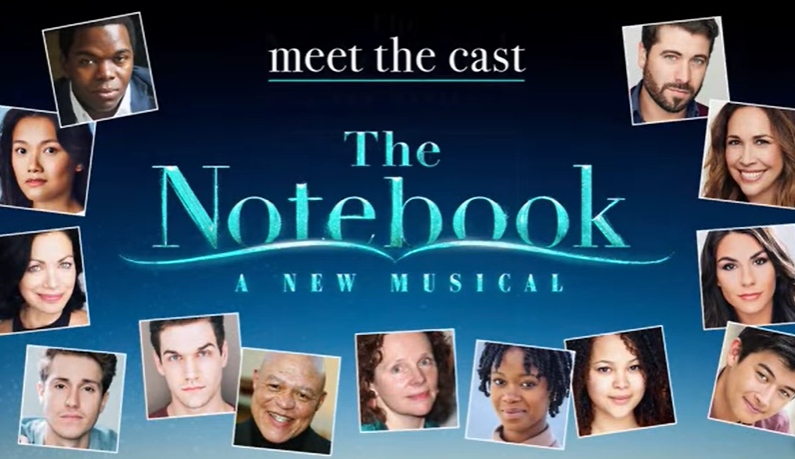 Full casting has been announced for the world premiere of new musical The Notebook, based on the hit Nicholas Sparks novel which was adapted into a beloved 2004 film starring Ryan Gosling and Rachel McAdams.

The new musical features music and lyrics by singer-songwriter Ingrid Michaelson and a book by Bekah Brunstetter. Performances begin September 6 at Chicago Shakespeare Theater. Originally scheduled to premiere in March 2022, the run was delayed due to a rise in Covid-19 cases.

The central couple of Allie and Noah are portrayed by three different actors over the course of their lifetimes in the production. Jordan Tyson plays Young Allie, with Joy Woods (Six) as Middle Allie and Tony Award winner Maryann Plunkett (The Apple Family plays) as Older Allie. John Cardoza portrays Young Noah, with Ryan Vasquez (The Wrong Man) as Middle Noah and John Beasley as Older Noah.

In The Notebook, Allie and Noah, both from different worlds, share a lifetime of love despite the forces that threaten to pull them apart, in a deeply moving portrait of the enduring power of love.

Known for her distinctively soulful folk-pop style, singer-songwriter Ingrid Michaelson is a force in the music industry, with four Top 20 albums and two platinum singles: “The Way I Am” and “Girls Chase Boys.” Michaelson’s nine studio albums have been released on her own independent label Cabin 24 Records and her original songs have soundtracked important moments in hundreds of television series and feature films. Michaelson made her Broadway debut as Sonya in Natasha, Pierre, & the Great Comet of 1812 in 2017.