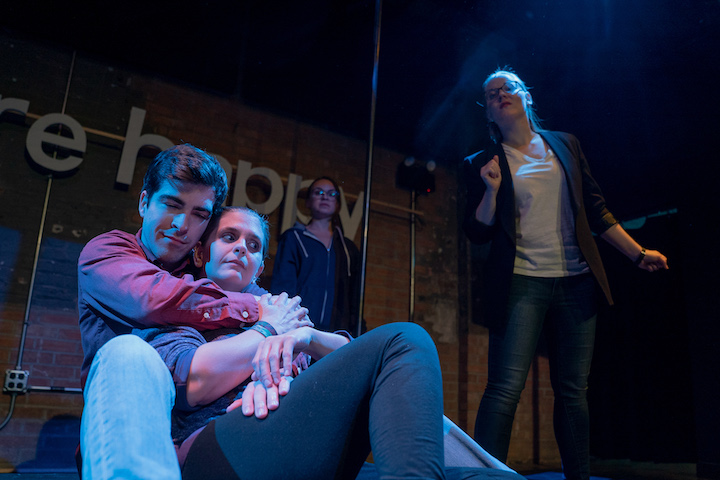 Hell is relative, familiar and a whole lot more — at least according to French-Canadian playwright Rébecca Déraspe in her 2016 work, You Are Happy. Translated into English by Leanna Brodie and also interpreted in American Sign Language (ASL), Chicago’s Red Theater artistic team has created an immersive and inclusive theater experience, without losing any of the source material’s dry wit and human cynicism.

Déraspe owes a tremendous ideological debt to the Existentialist school of thought, a philosophy to which she contributes her own perspective. The script develops Jean Paul-Sartre’s famous conclusion that “Hell is other people,” extending the paradigm to include the self. After all, “I” am still a person capable of rendering my world a psychological hellscape. The script asks audiences to consider the satisfying and painful aspects of both solitude and partnership, without offering a definitive value judgment of either state.

You Are Happy presents theatergoers with the small, quirky story of career woman and committed singleton, Bridget (Emily Turner – ASL, Elana Weiner-Kaplow – Voice). Bridget is the vigilant caretaker of her brother, Jeremy (Brendan Connelly – ASL, Bowie Foote – Voice), a suicidally depressed young man yearning for the stabilizing forces of domestic partnership. Bridget, who seems more evolved in terms of understanding the often-arbitrary nature of human happiness, plucks a potential girlfriend for her sibling from the aisles of a local grocery store.

Chloe (Michelle Mary Schaefer – ASL, Sarah JK Shoemaker – Voice) has been dateless for some time, confiding that work, the occasional outing with friends, and the confines of her apartment don’t offer much opportunity to meet available men, emotionally or otherwise. When Bridget accosts Chloe at the market with a “crazy” plan to move her brother into the single woman’s place, creating an instant relationship, Chloe’s not as terrified as logic might suggest she ought to be. 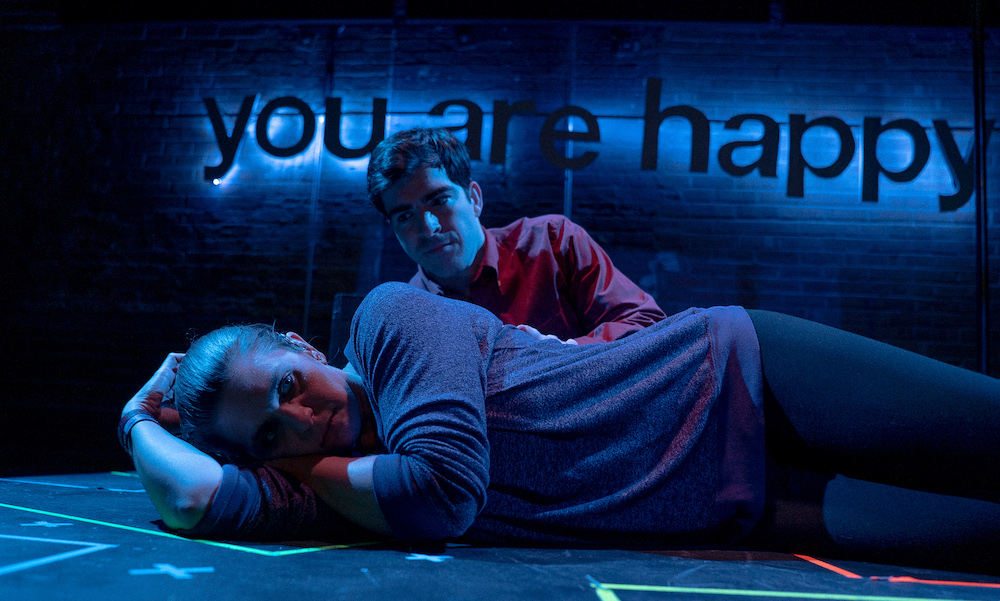 Because human thought is rarely linear or binary, the decision to task two actors with bringing each of the play’s characters to life feels completely organic. At any given moment, the audience is privy to the internal thoughts of each subject, even as we see the external manifestations of those thought processes. This could easily have been messy or confusing. Still, under the well-choreographed co-direction of Mary Kate Ashe and Aaron Sawyer, You Are Happy delivers a nuanced, emotional exploration of romantic relationships and their satisfactory limits.

The production is challenged by a couple anachronisms that, while not substantial enough to detract from an overall positive experience, are nonetheless appreciable. The extensive translation work required to stage the show reveals deliberate creative choices designed to distinguish You Are Happy from Ms. Deraspe’s source material. However, the reasons for these choices are occasionally opaque.

In its original French, the play is entitled Deux Ans de Votre Vie (Two Years of Your Life). In press coverage of the Red Theater version, it is mentioned that Brodie opted to rechristen the script, but the “why” is never explained. Theatergoers with a preschool-level of French won’t fail to catch the disparity. The play’s title and dialogue are conspicuously displayed on large monitors that are part of the set design. While I personally enjoy the Jedi Mind trick implications of hollow self-affirmations, it’s hard not to wonder why the original title didn’t work for Red Theater.

Minor continuity quibbles aside, You Are Happy adds new, richer sensory dimensions and options to the theater experience. Well-acted and directed, the production is a brief (90 minutes, with one intermission), thought-provoking look at humanity’s canny ability to be dissatisfied in all states.

You Are Happy
Red Theater
The Edge Off Broadway
1133 W Catalpa, Chicago
Through December 8